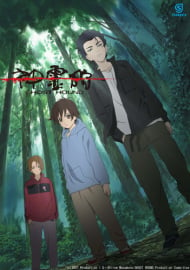 Tarou has dreams - distressing dreams, related to the trauma he suffered as a child. His dreams and visions disturb his ease of mind, constantly reminding him of the darkness of his fear at the time he lost his sister all those years ago. He relives the fear, but can't recall any of the details of the time. Now, a new transfer student, Masayuki, takes an interest in Tarou's troubled past, as well as their school mate Makoto's connection to the dark incident. Under his persistence, the three boys end up visiting the site where Tarou was held hostage as a child: a decrepit hospital beyond the dam. The three venture forward to face their pasts and fears, unsuspecting of the bizarre world they are about to enter...

Demograph: 18+ Story 8/10 Only on the penultimate episode did I discover that the original suppose for this series was penned by Masamune Shirow. It doesn't really show, although as that was in 1987 it isn't so surprising. Why it took 20 years to make it to screen is anyone's guess. Anyway, the story is very good. A dark and moody tale at heart, this anime mulls through the lives of its protagonists and a semi-real world of astral projection and spirits. It does so in a way immediately attributable to Nakamura Ryuutarou's (Serial Experiments Lain) direction. I enjoyed SEL's rasping static sensory deprivation, and I love it here too. The bassy atmosphere death rattles the viewer through several inter-connected disturbing backstories, and drapes the leads characters in harsh, heavy shadows. The story revolves in the "unseen world" of disconnected spirits, and is played out as part mystery, part science. The exposition and investigation is mainly from the perspective of juniour high school students, connected by those dark backstories; and this is perhaps one of the small blemishes on the series. While the "difficult past and large responsibilty on young shoulders" plot element is powerful despite its regular use in anime, I think the children retained a little too much of their childish appearance during the progression of this series. Indeed it was not Shirow's intention to have such young protagonists. Animation 8.5/10 Simulteneously beautiful and slightly wrong. The quality is very high, as you would expect from Production I.G. But perhaps the tones and designs of the children, again, bring the show down slightly. The atmosphere created by the backdrops, creatures and settings throughout was exceptional, but the flat-coloured characters distracted slightly from that and just felt a little out of place. A few bad choices were also made during astral projection. The initial "baby" characters look a little too silly, as do some of the later apparitions. Overall, though, the designs and smoothness need some applause for their left-of-mainstream quality. Very well put together; sometimes even creepy. Sound 8/10 Like SEL, one of the things that brings the atmosphere and animation and script together is the sound used to bind them. The fuzz, the buzz, the scrapes, the dinks - all work fantastically with the mood and direction. Although you could argue that the general impression is almost too similar to SEL, it works very well regardless. OP is also well suited. Japanese VAs are good, and mild-mannered enough to pull off the roles very professionally and convincingly. Characters 8.5/10 The very believable story within what is something of a fantastical show is exposed beautifully through the main cast. Common personality types crop up but remain under-done to perfection, easily escaping the horrible tendency in asian media to ham-up emotions. The leads are well defined and maturely designed. There could be a little more conflict in there, and some things perhaps shouldn't go quite as smoothly as they tend to do for those characters, but I was very satisfied with the way things turned out. All but one or two characters are important in their own way, and most hold themselves together well and deserve their screen time. Overall 8.9/10 With such good all round scores it's tempting to go even higher with the overall mark, but all I'll do is recommend this to anyone who enjoys a mature anime. Though the series runs for 22 episodes there were no points when I felt cheated because of that. There's no filler in here. The fascinating story unfolds generously, without recourse to distraction. Although I felt a couple of things could have been explained a little more, the ending was a satisfactory finish for what is literally a one-in-a-thousand anime. Now to hunt out the next classic hidden within swathes of soggy cardboard and freaky pillows.

The story got off to a slow and somewhat boring start, but after a few episodes I really got into it. It has a pretty original storyline. I really enjoyed watching Ghost Hound. 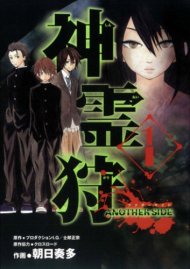 Ghost Hound: Another Side