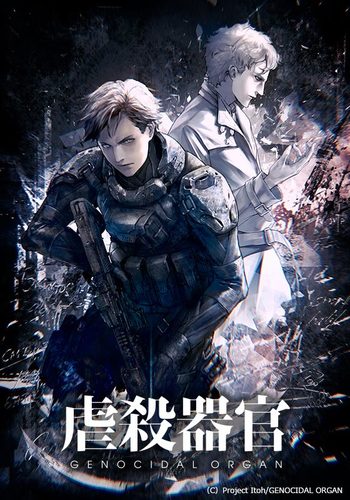 The movie is part of a are a trio of works (Genocidal Organ, Harmony & The Empire of Corpses) by the late Japanese science fiction writer Satoshi Itō, under the pseudonym Project Itoh. They are stand-alone works rather than a true trilogy (they are just joined thematically), so you don't need to watch any of them in a particular order.

This movie is based on somehow in real-life events, but they are exaggerated and taken into a sci-fi alternate reality in order to create the setting used to discuss the themes of the story. Do humans possess a Genocidal Organ? How far are we willing to go in order to protect our peace? Is it ok to remove a soldier's emotions in order to make them better at killing the enemy? These are some of the questions explored throughout the story, but they are also a means to deliver some social criticism of our societies and the way the world works, especially in regards to involving ourselves in the problems of others.

The movie has plenty of action and interesting sci-fi technologies, but the focus of the story it's the philosophical message it tries to convey and the questions that will linger in our minds with real-life issues that we are yet to overcome in our societies.

The visuals are great, one of the latest works of acclaimed Studio Manglobe before they went bankrupt causing the film's release to be postponed until resumed with the same staff under the newly created Geno Studio. Luckily, there was no loss of quality in the animation.

The sound effects & music are a good complement to the visuals.

The dub is ok.

I usually don't write reviews, so this will also not be your typical review.

This movie is a faithful adaptation of Satoshi Itō's book of the same title. It's a fantastic book and I highly recommend reading it before watching. The source material was copied almost precisely 1:1, similarly to how Watchmen was adapted for the screen. It is my conviction that books should be translated not copied when adapted for a different medium. Otherwise, something gets lost as is the case here. I scored the movie as a 1:1 adaptation. ANd as such, for someone who read the book, it's a resounding 10. Eye of the beholder, though. If I were to judge it through the eyes of someone unfamiliar with the source material then I wouldn't go higher than 7.5.

It's also a testament to Satoshi's writing that some scenes were eerie identical to what I have imagined when reading. From room layouts to furniture and mood. It makes for a visceral watching experience and it's why I scored the movie a perfect 10.

I have seen other reviewers complaining about gore. I will begin by saying that this is how hits with high caliber and velocity bullets will do with the body. There isn't much exaggeration here and for a good reason. The book was brutal in describing gory details in order to paint the canvas on which the desensitization of the protagonist is starkly clear. It's all to prove a point, trust me.

All in all, it was a delightful surprise to discover this movie was done. Fun fact: the writer was a friend of no other than Hideo Kojima himself, who was a fan of his prose. And the influence shows a lot in his games, I dare say.

So basically, a city blew up and everyone got real mad about it, all the rich countries shut their stuff up while the poor ones governments killed all their people. Now america is a dystopia where privacy isn't a thing, and our hero the COD main character is sent on a mission to find a philisophical evil dude before he makes more people kill each other.

I really hadn't known a lot about Genocidal Organ (GO) before watching this film, to my detrement or not. The writer I found interesting, as apperantly his novels were really well-liked even though he died too early. It's a shame. So since I didn't know about him and really saw this film as Manglobe yelling at us from beyond the grave I went into it blind.

This movie is actually really great at quite a few things. Really what I thought I was expecting was a dystopian action thriller with copius amounts of gunmetal grey and rainy grey battlefields and grey literally everything, to cover for lack of creativity by putting a big poster up that says "Grey is the cool color" and leaving it up until everyone believes it. This movie doesn't stoop that low.

Actually its visuals are really frickin good and unique, I'd say. It looks CGI on the box art but actual CG is used sparingly and it's largely unintrusive. The movements of the characters are very realistic, which is weird when you contrast it with the completely unrealistic violence going on around every corner.

Really, I don't know if these people have never actually studied physics or if they just had a weird dream where human blood was full of iron filings and every bullet was a negatively charged magnet, because that's what it looks like when people get shot, their skin and all just says "fuck it i'm out" to the whole thing and makes way.

Other than that the action is good and the over-the-top-ness can actually make for some pretty good shock value. I say that with a straight face even though shock value is usually a shit excuse for entertainment, it's one of the main things this movie has to offer with its shallow content it tries to make seem way more complicated with fancy words and pretentious villain talking than it is.

There is a creepy mechanic that goes into these violent shock value things, which, the soldiers apperantly have all their emotions and feelings removed before each battle so they'd be more effective turning them into personafied zombies. Seeing someone with their intestines hanging out like an unspooled hose, and then looking up at you and asking you if you've got a few magazines to read before they bleed out entirely because by golly is being cut in half is boring, isn't exacly comforting. The rest comes from the fact that child soldiers are present and that's just supposed to be normal, until the movie tells you it isn't. Like no shit sherlock, I guessed from the fact that they're children. They're supposed to make me feel bad, as all children in movies are.

The story and characters really aren't anything new; generic soldier goes around trying to find pretentious evil douchebag who all he ever talks about is how no one understands him and how grey his moral areas are, because he stole a pretty girl he likes now. What really sets it apart from other dystopias is the way it handles the underlying theme of humanity's innate violent nature, underlying as it may be until it springs up during a 10 minute conversation near the end of the film making you realize "oh so that's the deep meaning of this movie. Good thing they told me so I didn't have to actually think about it." only they could have told you in fewer words. 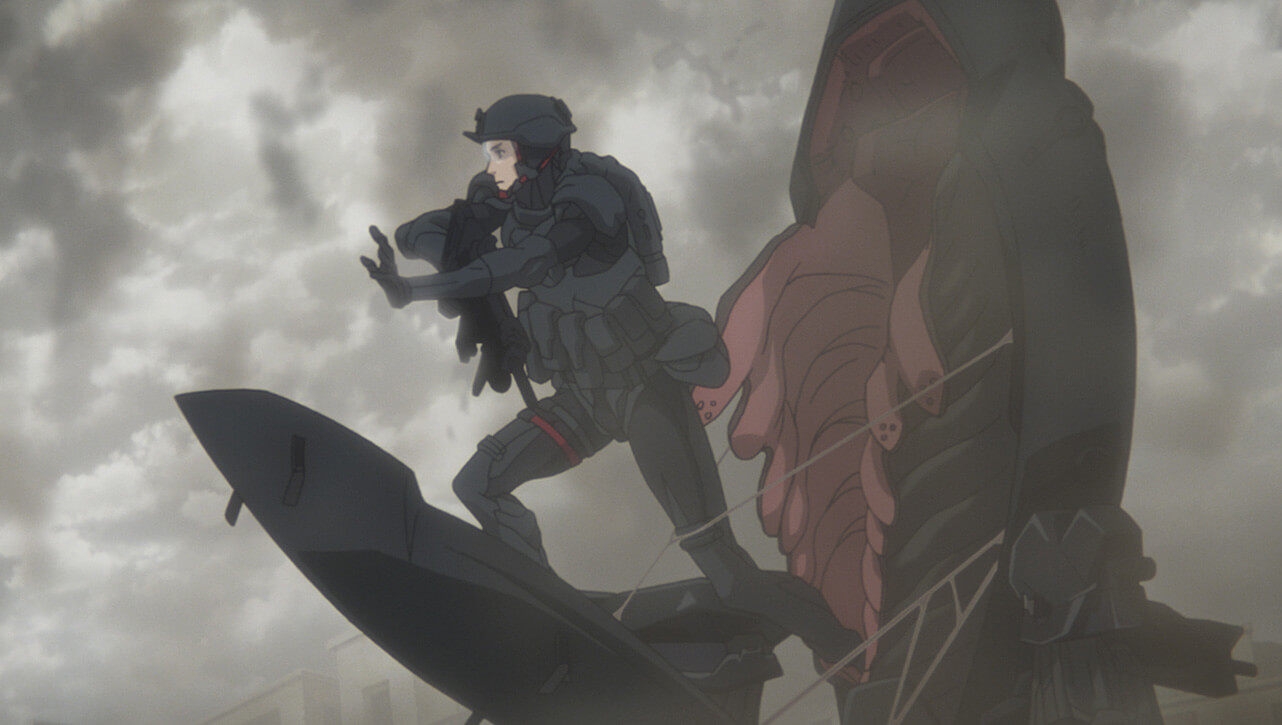 I kinda wish they had spent more time on how the technology in this movie works because I kept asking myself "what the heck is that pod thing that's cool!" every time it showed up only to self destruct. It's got a weirdly biological feel to it, even the armor. I like that aspect.

Didn't notice anything wrong with the sound at all, I suppose it was up to par. Didn't impress me though.

Overall GO is a good military movie for people that like military movies, but for someone looking on a deep exploration of the human brain and rooted violent tendencies besides just being a plot device, you may be disappointed.