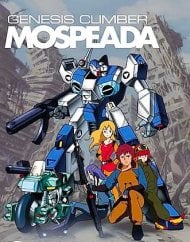 The Invid, the arch-enemies of the defeated Robotech masters drawn by the proto-culture left in the SDF-1, have invaded Earth and taken full control, and the entire world has been occupied. Humanity has either been killed off, enslaved or left to drift. This is the sad setting Lieutenant Commander Scott Bernard finds himself in when he, together with the others of the Mars base, returns to Earth. The Mars forces try to retake the planet, but are no match for the Invid, leaving Scott as the only survivor. In an attempt to continue the fight, Scott starts to assemble a band of freedom fighters, and fights the Invid wherever he can. All of this in the hope that one day, Earth can be retaken.

Although Kikou Soseiki Mospeada is vastly known as the “third part of the Roboteck series”, in reality, it is a stand-alone series with a similar scenario as Macross. As a publicity stunt, it was united through name and sound alteration with the ending of the Southern Cross storyline (Another stand-alone series, which Americans arbitrarily tied with Macross!). Thanks to the “borrowing” of Roboteck’s name and fame, it earned some recognition, whereas otherwise would be totally forgotten. Why? Because it is a pathetic series that has nothing new or even interesting to offer us. This review refers only the original stand-alone series and leaves aside its hypothetical ties with the other two series (for the best, I believe). ART & SOUND SECTIONS: 4/10 Graphically, Mospeada was outdated even when it aired. Aesthetically, all its ideas where copied and pasted by other mecha series. The only original idea it had, where the mecha suits, which could transform from humanoid battle armors to motorcycles, with a very cool and realistic way. A more careful study on the graphics reveals many typical problems, most superficially made anime have. The first episode offers very interesting space battles, detailed transformations and cool explosions. But as soon as the second episode ends, all battles, transformations and explosions thereafter become simplistic and thus uninteresting. The same goes for the characters, who are all drawn in almost casual/typical cloths and have no appeal. Add to that simple forests and ruined cities as the only backgrounds in almost all the episodes, ridiculously-drawn aliens, un-imaginary battles and lame humor. The result is a graphically very boring series. Besides a few scenes where aliens do and say some flashy things and use many visual effects, all the rest of the series is not interesting. STORY SECTION: 5/10 In the future, insectoid aliens conquer the Earth and a space armada of humans from other planets comes to liberate their home planet. The first attack on the planet ends in defeat and the protagonist, a soldier, is left alone on the planet, without communication with the fleet. So, like Rambo, embarks on a mission to defeat all the alien nests alone, until back up arrives to finish what is left. He meets a few other humans, who team up with him on his quest to save the Earth! Ta ra ta ta! Go, super commando and typical sidekicks! Accomplish what an entire space armada could not!Just from the description, you can tell that the main scenario is not only typical but is also unrealistic. The powerful aliens, who conquered Earth and defeated its armies in just minutes, seem unable to defeat a single foot soldier. Childishly presented, almost all the episodes are stand-alones, except from a few, where the otherwise superior aliens evolve into low-life humans in order to get stronger (!!!). As for the finale, the most expected of all things happens: The humans overwhelm the aliens with superior technology but the alien queen escapes with ease (superior technology, my butt!). A few points in the story may seem interesting for some, as some episodes deal with the life of gays and romance during wartime. Heck, there are even a few low-toned ecchi scenes and a little girl who acts as if she is a sexy woman! But even those nice scenes can be found in many other (better) series. CHARACTER SECTION: 4/10 We have a Rambo-type guy, with a grudge for the aliens. They killed his loving woman and now he wants revenge (they also killed most of humanity and enslaved the Earth, but he doesn’t mind as much). We have a singer cross-dresser to spice up the story. We have a butchy woman and a little girl for a few ecchi scenes. We have insectoid-turning-human aliens with identity crisis. They must be interesting, right? Wrong! They are boring! They are predictable, shallow and have no character development. Totally flat and un-interesting. VALUE SECTION: 1/10 Have you watched the anime Blue Gender? If you did, you don’t need much thought to consider this series a childish and pathetic version of it. ENJOYMENT SECTION: 3/10 The few interesting points I mentioned before did make it a bit enjoyable. But in general, this series was a waste of my time. And to think that they dared to tie this thing to the majestic Macross! Shame on them! VERDICT The accused is found … GUILTY! … of using plagiarism for disguising a mediocre work. SUGGESTION LIST Blue Gender. Better in story and characters. 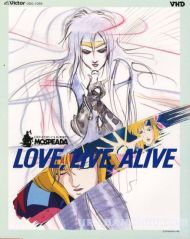 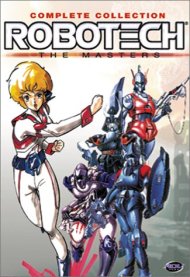