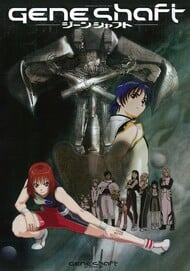 In the future, babies are no longer born - they're grown. The crew of the newly developed spaceship Bilkis has been sent to investigate a mysterious "ring" that has shown up in Earth's orbit. Hand-picked through careful gene selection, the crew covers the area of skills needed to complete the mission. Except for ensign Mika Seido, whose gene-type is "white" - undefined.

In case you wonder, this anime has nothing to do with some weird branch of SHAFT. Any relation is purely accidental. A thing most anime usually mess in is having a clear picture of how many episodes are needed in order to properly tell the context of the story. It is usually too little or too much. It mostly has to do with whatever contract they made with the company, as well as those pesky episode limits that are set in stone (12, 24, 52, etc). Despite all that, it still looks silly when they try to show a setting which is very complicating in just half a season. Geneshaft is one good example. The basic concept is highly interesting; it has to do with a future where reproduction is artificial and feelings have been genetically replaced with pre-constructed behaviors and ways of thinking; thus everybody’s role in society is determined at her creation and not based on life experiences or personal choice. I used the word “her” because most of mankind is now females; this way they are considered less violent. All that are an attempt to root out negative emotions and unpredictability, yet they failed as even after all these safeguards war and terrorism are still present and at large. Add to all that a weird alien object that appeared in space and everybody is after it to offer a metaphysical aspect in all this mess.The whole thing is basically a combo of: 1) Vandread (a silly space adventure)2) Gattaca (a live action film about gene manipulation) 3) and Space Odyssey 2001 (the cult film). Unfortunately by making this comparison Geneshaft feels weaker than all the above. It lacks the retro magic of 1, the in-depth analysis of 2 and it definitely has less cinematics, seriousness, planning, coolness and historical value than 3. It ends up being a good idea with cheap production values and problematic presentation. The major problem I find with this series is its rushed yet dull plot. The characters lack emotions, the action is unimpressive and although that would make a fine mature story (instead of the usual overhyped stupid teenagers and their poser retarded explosions), it still feels bad because of the lack of something captivating. Being cynical may be uncommon and excused in this sort or story, yet it doesn’t mean it helps you to identify with robotic characters. I encountered something similar in other shows such as Blue Gender and Boogiepop Phantom and I must say variety is the spice of life. Leaving ALL OF THEM acting cynical ends up being repetitive and boring; you need some sort of differentiation to keep some sort of comparison. The scriptwriter did try to play along with that by including a few males working as factor X but the focus on them was so little, it’s as if they are not there at all. The production values are nothing to brag about; they fail to attract you into watching further. Here they are depicting a detailed industrialized solar system with little effort at emersion. Then they add an unimpressive soundtrack and expect people to like it for being very good at being apathetic. That is not how you make an entertaining show, no matter how mature it appears to be. Furthermore, having an almost all-female cast all of which are beautiful chicks ends up making the whole show to look like it’s fan service with a pseudo-serious backdrop. If women are artificial, then why do they need boobs or genitalia? And does that mean ugliness is eradicated from the world? They sure don’t delve into such details and you end up thinking “Mmm, a world full of cooldere bishojos I can create any way I like, ready to do all my biddings.” It’s like a world made up entirely of Rei Ayanamis and eventually becomes ridiculous rather than impressive. You definitely care far more for this than the boring story about some aliens trying to harm Earth and love is panacea or something like that. I don’t know; I hardly remember what it was all about.And anyways, 13 episodes are very little time to actually care about the characters, or find enough duration to get to like the setting. I have seen far worse examples of such types of shows, the worst being Diverge Eve, (aka Boobs In Space). Geneshaft is a step better for not being so overly focused on giggling breasts, but it is equally a failure at telling a good story or having compelling characters. Thus I do not recommend it. Not even as a time killer. And now for some excused scorings. ART SECTION: 7/10 Analysis: General Artwork 2/2, Character Figures 1/2, Backgrounds 2/2, Animation 1/2, Visual Effects 1/2 SOUND SECTION: 6/10 Analysis: Voice Acting 2/3, Music Themes 2/4, Sound Effects 2/3 STORY SECTION: 5/10 Analysis: Premise 2/2, Pacing 0/2, Complexity 1/2, Plausibility 1/2, Conclusion 1/2 CHARACTER SECTION: 5/10 Analysis: Presence 1/2, Personality 1/2, Backdrop 1/2, Development 1/2, Catharsis 1/2 VALUE SECTION: 1/10 Analysis: Historical Value 0/3, Rewatchability 0/3, Memorability 1/4 ENJOYMENT SECTION: 1/10 Analysis: Art 0/1, Sound 0/2, Story 1/3, Characters 0/4 VERDICT: 4/10 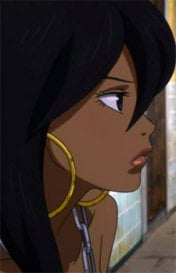 This series was interesting with gene engineering as a concept and set 200+ years into the future. I like high tech anime sometimes and I was impressed with Geneshaft from the dialouge to the characters. The animation was great although at some points when characters had flashbacks the characters looked outdated. This was a more sophisticate version of a space story versus Kiddy Grade and Cowboy Bebop. -kissmetgen

Geneshaft is a show with a lot of ideas. It's a shame they only had 13 episodes to squeeze it all in. Setting Much of the show's run time is dedicated towards worldbuilding, which in this case is actually a good thing since the setting is by far the best thing about the show. What's great about Geneshaft is its level-headed approach to exploring the pros and cons of a society managed entirely through genetic engineering. Movies discussing this subject, such as Gattaca, tend to highlight only the negatives but in Geneshaft legitimate arguments are made for both sides. And more importantly, neither side is explicitly declared right or wrong. That decision is left up to the audience to make. Characters One of Geneshaft's other strengths is the way which it integrates its characters with the setting. These characters live in a far future where humanity almost caused its own extinction and had to drastically restructure itself to survive; because of that, the characters in Geneshaft have different values from us on a fundamental level. To the point that people from our time are derided as the "Ancients" who nearly destroyed the world with their individualistic greed. Every character acts the way they do for a reason, even the unlikeable ones. Geneshaft's genetically engineered utopia is riddled with flaws, and these flaws are what fuel certain characters' unhealthy mindsets in very specific ways. Even the character who I originally hated the most ended up getting fleshed out enough to reach the level of somewhat sympathetic. Most of the characters in the main cast are each representative of a different mindset towards Geneshaft's world with Mika, our protagonist, acting as the sort of blank slate who's exposed to all these people and their views. Even though Mika's role in Geneshaft's moral debate is to be the blank slate, the same cannot be said about her personality. She's got lots of it, making her a decently likeable main protagonist. She had good chemistry with Sofia and she's a rare example of a hot-headed female character done right.  Unfortunately, interesting characters does not equate to empathetic ones. Although Geneshaft's characters are engaging on an intellectual level and I did end up liking most of them, they lack the emotional depth needed to get attached. This is partially due to the fact that during the second half of the show there are several rushed romance-tinged subplots that just don't have the time to develop properly.  Story An intriguing setup with a rushed ending. Geneshaft's story had me on the edge of my seat until the very last episode and I ended up binging it all in one go even though I hadn't planned to. That last episode though, oh boy, it was something. I couldn't help but laugh at some of the ridiculousness that went down in that finale. They definitely needed another 2 or 3 episodes to wrap everything up properly. Visuals Geneshaft was made in 2001 and it shows. That fuzziness of early-2000's digipaint anime is unavoidable. However, all of the character designs are distinct and nice to look at. Notably including characters of different races in both the main cast and the background. Coming from Satelight, one of forebearers of CGI integration back in the day, Geneshaft has a lot of CGI. Most of it is only used for machinery, the alien Rings, and the Shaft itself but they were composited pretty well into the show so I never found it that distracting. You could always tell when they were using CGI, but compared to the low video quality it's easy to get used to.  TLDR Geneshaft is an underrated show that I solidly reccomend to sci-fi fans looking for intriguing worldbuilding and refreshing presentation of a well-worn topic.