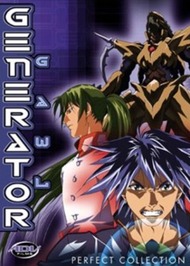 Animated by Tatsunoko Productions, a company with generally low budgets. They have made a few goodies such as Irresponcible Captain Tylor and Soul Taker but their roster is mostly made up of bad and passable anime. Directed by Mizushima Seiji, whose roster includes average to bad works. This doesn’t look very promising from the very first second you lay your eyes on it. I have seen lots of shows where the protagonist transforms to a cybernetic monster and wrecks havoc to other monsters. The most famous amongst anime are Tekkaman Blade and Biobuster Armor Guyver, and if I include live action there is also Kamen Rider. Watching most of their duration was interesting or exciting. Since their target audience was young teens, they were meant to be full of action and emotion, the same things which this variant DOES NOT HAVE. Compared to the above titles, the production values are TERRIBLE! Simplistic character designs, dull explosions, boring BGM, slow plot, amateurish directing, the list of lazy productions just goes on. The premise of the story is definitely good, for combining lots of interesting science fiction elements, such as time travel, advanced genetic manipulation, and mind control. Everything else in it though is one big mess. The pacing for example is purely episodic in the first half before it becomes slow and erratic in the second half. Half of the audience will be completely bored and will have given up midway, while most of the other half will be staring at it with complete apathy to the end. THERE IS NO EXCITEMENT! Everything plays out so damn basic and slow that fail to impress you. At the same time this is not one of those deep philosophical shows that go for substance instead of style. It really is immature all the way, so not even the sophisticated viewers can appreciate it for trying to be smart. The very first episode is about three pretty boys being arrested as peeping toms, before being released and by complete chance having to live in the same house with the girl one of them erroneously molested. HOW’S THAT FOR MATURITY? No matter how smart the show attempts to be at times with some funky scientific talking, it is all trashed with retarded anime humor such as that.What is even lamer about it is how the three main characters are supposed to be pretty boys and extremely smart. “Supposed” couldn’t be more presented in a vaguer way since they are clearly acting completely stupid most of the time and ARE NOT THAT PRETTY TO BEGIN WITH. Of course we can always blame the production values for the later issue. Everyone in this show looks like a blob most of the time. And damn, some of their hairstyles are just OUT THERE! There is even a girl where something bad happens to her and instead of feeling sorry you are just laughing with her improbable hairdo. What is even lamer than that is how we are supposed to consider the main trio to be super cool and awesome for just standing around while wearing fancy leather and sunglasses. How the devil can we do that when essentially only ONE of them is important to the plot and he acts like an idiot all the time? Which one of the three you may ask? Well, look at the title, why do you think the anime is called Gawl? So yeah, only he is the hero and the other two just come along as extra space and flavor for the female audience who… Hey wait a second; why do we even need a female audience for this show to begin with? It is action/supernatural for male teenagers! Stupid publicity stunts!Anyways, it’s not like they worked to begin with. They don’t look so awesome because the production values suck. And so do the battles; man, they are so short and dull. Some creatures make of foam appear and Gawl turns to a beast and kicks their asses in a few minutes of boredom. They don’t even blow up after defeat; they just dissolve to dust, which is again lame. The other two and the token chick are mostly looking spaced out at him while doing all that; it’s like they are there just to eat up screen time.They are not even developed in any way to care about them. Every single character in this show is a simplistic archetype and sticks to it no matter what happens. The three dudes are like they popped out of a c-grade date sim for women and the two girls are standard token chicks that are there to provide humor and cheap drama without actually doing anything. Yawn! The fandom forgot about this show very fast and for a good reason. There was nothing in it that you won’t find in the titles I mention in the beginning and it also looks bad. Not recommended. And now for some excused scorings. ART SECTION: 4/10 Analysis: General Artwork 0/2, Character Figures 1/2, Backgrounds 1/2, Animation 1/2, Visual Effects 1/2 SOUND SECTION: 4/10 Analysis: Voice Acting 1/3, Music Themes 1/4, Sound Effects 2/3 STORY SECTION: 3/10 Analysis: Premise 1/2, Pacing 1/2, Complexity 0/2, Plausibility 0/2, Conclusion 1/2 CHARACTER SECTION: 4/10 Analysis: Presence 0/2, Personality 1/2, Backdrop 1/2, Development 1/2, Catharsis 1/2 VALUE SECTION: 1/10 Analysis: Historical Value 0/3, Rewatchability 0/3, Memorability 1/4 ENJOYMENT SECTION: 1/10 Analysis: Art 0/1, Sound 0/2, Story 1/3, Characters 0/4 VERDICT: 3/10

Plot: So I mainly picked up this show to satisfy my action cravings. It accomplished this aspect very well. However, the story itself isn't very original. Basically, people come from the future, try to save the past while infiltrating a high school yada yada yada. It's been done before, many many times. Still, the show itself was interesting to watch. Even though the plot wasn't intricate or original, I still found myself excited for the next episode, so the entertainment aspect of this show was (at least for me) good compared to what I thought it would be. There were also a couple of plot twists at the end that did manage to surprise me and throw my self made theories down the drain.  The pacing of this show was a little strange. Given that it was only 13 episodes long, this was expected. The episodes all usually follow the same formula, so by the middle of each episode, you can predict what will happen towards the end. However, if you're just craving some action, then this shouldn't really bother you all too much.  Animation: The female lead of the show had a weird character design. That's all I can really say on character designs. However, the animation was decent for its time. This show probably didn't have the largest budget, and since it was made in the late 90's it's not bad. The Generator designs are also a little funky. They looked more ridiculous than they did scary/intimidating. Sound: Honestly, the soundtrack made no impression on me whatsoever. I watched this show recently, and don't remeber ever paying attention to the music. The dubbed version was good as well as the regular one. Personally I liked the dubbed one more. Characters: The characters had surprisingly decent chemistry. So it was fun watching them banter from episode to episode, though it did get kind of annoying towards the end. Some characters angst over previous deeds and what not, however, it doesn't get annoying, due to the short length of the series. If it was longer, then yeah, it would definitly become obnoxious. Overall: This was a fun watch because it filled up time. My craving for action was sated. In terms of everything else, this is a mediocore anime. Nothing is really original, nor makes a lasting impression. If you're looking for some deep philosphical series, or seeking out classics or something of the sort, don't watch this. Don't watch this if you're not craving ass kicking either, cause then you'll notice the faults of the show ten fold.