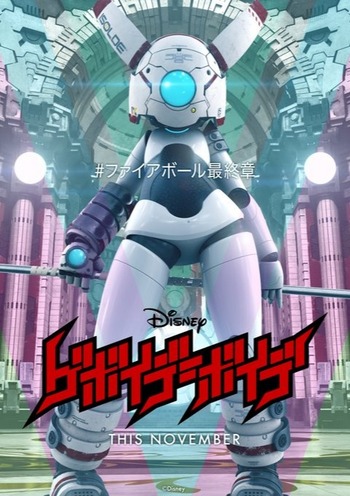 The year is Tokyo 2034, and humans coexist with artificial intelligences known as Boomers. The Branch, a special police unit, has the mission of handling all Boomer crimes. With the help of Basil, the Boomer Rod, the heavy weapons-freak Reiko, the Boomer-expert Bill, and Elza, the Branch must protect people from defective Boomers and investigate why they are suddenly going berserk. The case becomes more complicated when Kimbal finds a mysterious drug during one of the investigations. Mad Dolls, a dreaming hooker Boomer, and unexpected events unfold into a political conspiracy against Boomers and Basil himself!

In a future not too far from now, humanity has advanced to a point where the line between Homo Sapiens and Androids have blurred completely. This has occurred so that the species could survive. Technology has allowed humans to travel into deep space to colonize other planets and galaxies deep in the universe because Earth has become uninhabitable. One of the many unfortunate results of this robotic Darwinism is that human behavior and consciousness has also changed over the years. Much of what makes one human -- love, family, intimacy etc., have all become things of the past. Almost legend...

As Sumomo berates Kotoko for not getting into her morning exercises, Hideo leaves for college but manages to leave his wallet behind. After sending Chii out in a schoolgirl outfit to deliver the wallet, the ever-lively Sumomo realizes that something is wrong… Chii has left her panties behind! Now in a fit of panic the two teeny androids must find a way to escape the house and reach Chii before any rogue gusts of wind expose her naked truth.