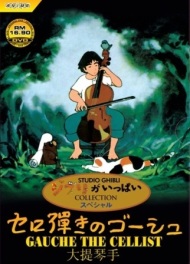 ENJOYMENT SECTION: 9/10 This movie is based on a popular short story for children by Miyazawa Kenji and has had many screen adaptations before this 1982 release. It is directed by Takahata of Ghibli fame so you can expect quality work. It is a sweet little story about a cellist (a cello player, that is). It is completely free of violence, nude and profanity. Even the scenario is only two lines long. Yet, it is quite enjoyable if you like simple stories. The pace of the plot is predictable but the sweet and comical way it is presented, makes it worthwhile. The vivid characters, the classical music and the simplicity of the whole deal itself will hardly make you realize that one and a half hour went by. As long as you like this sort of thing, of course. ANIMATION SECTION: 7/10 Simple character figures and backgrounds. The movie is quite bad in terms of attracting the eye of the average viewer. Yet, the characters’ mannerisms are very realistic and full of motion, making them pleasing to watch. Add a cartoon tribute to Mickey Mouse, cute animals and allegorical imagery in the background every time a music theme is performed and you have a half-dreamy presentation. Without having super CGIs, the movie does manage to keep you watching it, without becoming tiresome. SOUND SECTION: 7/10 Voice acting is good but not great. What mostly stands out are the clasical music pieces. Quite famous and well-performed, their tone affects the mood of the story by changing the colors, the backgrounds or the grimaces of the characters themselves. The music is quite good at giving you the illusion of being hypnotised or possessed by it. STORY SECTION: 4/10 The story feels almost like an Aesop’s tale. A young cellist has trouble performing well in his band. He is visited by talking animals at night that encourage him to keep trying or pay attention to something he misses. That is all. Although it sounds like it is worth 10 minutes instead of an hour plus of your time, the sweet plot will hardly make you realize that. It is not great but it still beats all those awful action series that are full of pointless violence and lame excuses for a story. CHARACTER SECTION: 5/10 We essentialy have only one character; the cellist himself. All other characters are there just for flavoring his personality. He looks like a lame, spineless dork; the archetype of myriads of anime protagonists. Yet, he is not surrounded by pretty chicks who dig him for no reason, nor he pilots Earth’s strongest mecha. All his worries are his mediocre cello performance and his training for becoming better at it. And no; he is not one of those “I will become the best (something) in the world!” idealistic idiots. He just wants to be a good cello player. Sounds too anti-climactic, right? Just a guy, without chicks or superpowers and without over-the-top goals. Well, although not imposing, he sure is far more realistic than your average Shonen protagonist. Like most of us in real life, he doesn’t save the world every week. He just deals with simple issues, such as playing a musical instrument. Which is not as easy as it sounds. And all the people he is surrounded by, are nor ultra sexy minxes or muscular brutes. They are average farmers, musicians, country kids… and talking animals. Ok, that last one was irrelevant with the rest but as I said, this is almost like an Aesop’s tale. The animals are a plot element in order for the Cellist to gain motivation. Since he is the only one talking to them, you can always say he got delusional for living alone, without women in the wilderness or something and save the realism of the story. I still don’t give more than 5 in the scoring, as there hardly was any real character development for the entire cast. VALUE SECTION: 3/10 I don’t watch anime for its talking animals or its dorky protagonists; I like some action, sex and mystery along the way. This movie was very pleasing but is hardly worth a second viewing. It is so simple and straighforward that you will almost wish it involved a lot more. I suggest the somewhat “A Journey to Fairyland” movie over this one. Fairies are cooler than talking animals. VERDICT: 6/10 Yes, very pleasing indeed… Now where did I put that DVD with the cyborg lesbian incestuous superheroines? SUGGESTION LIST A Journey Through Fairyland Swan LakeAh! My Goddess

Goshu the cellist I love an anime thats lead character is always striving for greatness.In this case our hero Goshu is put to the test to strengthen his cello playing for his town orchestra. With a picture of Beethoven on his wall and the guidence of talking animals? Helmed by the legendary Isao Takahata.What else could you expect from Oh Pro the anime production studio who have brought us some of he finest anime of all time. Since this anime is from 1982 I did not expect much for visual quality.I would like to see a Blu-Ray update. The music is splendid. You don't have to be a lover of classical music to enjoy this. It wouldn't hurt though. All and all this was enjoyable film. For all ages. I like this film as an introduction to beautiful style of music and to a beautiful style of animation that in my mind could influence a wonderful creative side.I feel I would have to believe that Tomoko Ninomiya the creator of Nodame Cantilble at some point in his existence was influenced by this film.6.5/10 PandaBeard!

This is a short film about a cellist, presented in a comical way. It seems he practiced so much he started hearing birds and other animals talking. The animation is well synced with the cello playing, and the animation looks like Ghibli's early days. I don't know what this is based on, but when something big happened in the story and I thought it would then start developing, the movie ended and I realized it was very short. Not a must watch, but if you got your hands on it, might as well watch it.