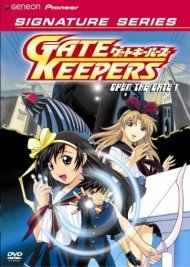 This review covers both seasons.Gate Keepers (GK) is one of the few GONZO works that don’t suck all the way because they held back on stuffing everything with lifeless 3D models. Too bad they realized later on how this would probably make something good out of their work and thus evetually threw in lots of that. One should never try to watch GK for the story or the plot, since this is GONZO we are talking about. It is to the most part an aimless adventure of kids with superpowers having fun and making fun of everything, while occasionally they need to save the world just for lulz. Although the story has some really interesting concepts around the origin of the villains (they are not really aliens from another dimension trying to take over the world) as well as the backlash of using the special powers too much (they eventually kill you) all that are completely underplayed for aimless comedy in the first season and for overflowed drama in the sequel.I do admit the humor level is good for its kind, slapstick and erotic without ever overdoing it, and the characters are easily becoming likable for their simplistic yet bold personalities. As far as enjoyment goes, it is a good comedy. Yet, it could have been far more if it was actually making use of its setting as well as developing its characters and not just killing most out-of-screen and replacing them with far less interesting ones. Hell, we are not even told why did they marry and have kids with different people that what the first season was hinting all along. We are not even told what is to be done with all these alien crystals they gather for so many decades. The production values are otherwise good, besides the 3D effects; trademark of GONZO. Characters and backgrounds are well drawn and colorful, with famous voice actors doing a great job. Still, they feel generic to the most part. There is no theme to make them stand out from so many other shows. Although the setting is the 60’s and they throw in some historical events to make it all appear historically correct, it still remains typical looking with stock character appearances and personalities. Same for the soundtrack, it has some really strong and interesting music pieces, none of which are eventually memorable.And then the sequel comes and WHAM 180 degrees turn around to a dark and depressing setting, mostly mysterious than easy going. I can’t say it is more interesting this way because it lasted too little and various revelations and developments were constantly happening rushed or out of screen. The new cast was also just pale imo version of the original and hardly as memorable. Damn GONZO, how hard would it be to use a few less funds for horrible CGI and use that to find a better scriptwriter? Gate Keepers is a good time killer but hardly masterpiece material. It has a lot of untapped potential, reflecting perfectly its production company. It could be worse but it could be not-GONZO as well. And now for some excused scorings. ART SECTION: 5/10 Analysis: General Artwork 1/2, Character Figures 1/2, Backgrounds 1/2, Animation 1/2, Visual Effects 1/2 SOUND SECTION: 6/10 Analysis: Voice Acting 2/3, Music Themes 2/4, Sound Effects 2/3 STORY SECTION: 4/10 Analysis: Premise 1/2, Pacing 1/2, Complexity 1/2, Plausibility 0/2, Conclusion 1/2 CHARACTER SECTION: 5/10 Analysis: Presence 1/2, Personality 1/2, Backdrop 1/2, Development 1/2, Catharsis 1/2 VALUE SECTION: 2/10 Analysis: Historical Value 0/3, Rewatchability 0/3, Memorability 2/4 ENJOYMENT SECTION: 1/10 Analysis: Art 0/1, Sound 0/2, Story 1/3, Characters 0/4 VERDICT: 4/10 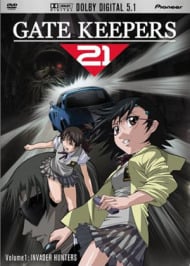 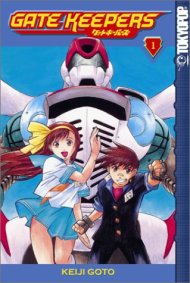