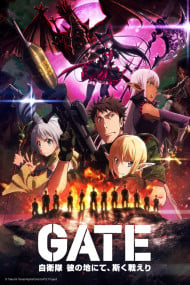 [No Spoiler Review, 1 episode watched. Previous season's review linked below] Looking at how they did with the first episode of the second season of the JSDF Gate anime, it seems they took the problem with the previous season into direct account. I made a note in the last review that they were avoiding dealing with this manga original source's grim/dark/grit atmosphere, because they didn't know how to show it in an appropriate context for mainstream audiences. They did well with the throat cutting in the first season's episode, but failed when it came to the siege warfare when hostages were used to get the defenders out of their defensive lines. Now we have one of the chief "proto" villains, who is abusing a bunny warrior in his bedroom, all naked, but behind a very well done "veneer" or "facade" of silk, so that only their outlines are seen.  http://www.anime-planet.com/users/Ymarsakar/reviews/20085 In that way, they can stay true to the atmosphere of the original source and also maintain their mainstream tv guidelines. This will have further consequences down the line, as it will setup an interesting event later on. They may choose to avoid showing the later scenes, due to budget or lack of attention, but the first episode here at least had the right style. A great introduction to the decadence and moral degradation of this pseudo Roman "Empire", the JSDF is facing. It makes it slightly more satisfying when the hammer of righteous firepower drops in on the antagonists, so to speak. It won't happen for a few more episodes, yet, however. The way the JSDF also sets up a humanitarian/spy outpost in the red light district is interesting and impressive even, on a professional level. That's how you get your toe stuck in the doorway, for the rest of your army, one way or another. The Cultural influence and vitality of Japan is contrasted with the naked expansionism and force of the Pseudo Roman Empire as well as modern day powers on Earth, the US or China. The last season had a little bit of this, but this season will give you a lot more stuff to compare and contrast with. Just as Japan expands into the awareness of the Western world, to the point where we here today read and write reviews of their popular and sub cultural artistic productions, without a single gun being pointed at our heads to make us do so, so the same happens in this anime with the JSDF and their Arnus fortress base. It can be easy to dismiss it all as Otaku culture, but from the perspective of 4th generational warfare and various other such communities, this is a very high level of skill being exemplified. Not merely in fiction, but in the meta verse as well, past the 4th wall. So overall themes, fantasy in a strange world, that is closer to our own reality. Dealing with historical entities like the Roman Empire and nomadic societies. A lot of fun stuff going on there. Just like the original source, I would recommend the anime for audiences in the seinen demographic, older males, on top of the usual expected audience.

Meh. No really, meh. It's the only anime I got to watch this season, and I really wish I would have chosen something else. I can see how it can appeal to your inner otaku, and I could see how someone who loves say Log Horizon would be really into this. However, this was not my cup of tea. Story: I didn't read the manga so I don't care how closely it follows the source material. The story line did progress, but overall it was utterly predictable and did not feel all that compelling. Animation: Nothing new from last season.  Sound: Nothing new from last season.  Characters: We learn a little backstory, but overall nothing really changes the core characters. They're all essentially the same people doing the same things for the same reasons. Overall: Despite the mediocrity, I did have moments of enjoyment. In hindsight, all of these moments were pandering to my inner otaku. The second season of Gate does not break new ground for the series or for Person-In-A-Strange-World genre. I don't see myself rewatching this.

I'm gonna just say... i love this anime... from what i have seen too now its is my personnal favorite. The anime came out of nowhere and the first episode held and still holds my interest. I really loved the look of the "special region" soldiers with their large square shields who is no doubtly inspired or directly taken form the roman empire. The fact that fantasy elements are also included like the elf, dragons,wyverns and other monsters is a huge bonus too the series. I get the feeling that the "special zone" imperium is very much based in the roman imperium NOT that such is a bad thing i love history and the romans are the center peak of it. We gets words like "Vassal", "Senate" and "Emperor" tossed at us really early which is why i conclude its the roman empire as their soldiers also has the square shield and spear. We also get too see them form a... uh... half testudo. When it comes too characters... it seems kinda.. eh bland. There are only 3 that peakes my interest and doesn't feel like another copy paste in another skin... But the series itself isn't about war and battle... tho such tend too be way too get someone interest in the first episode. As far as i can conclude too what i have seen its about cruelty done by leaders (be its be it by the emperor or the president) is equal no matter the time its being done it. Also that people... are still people. You lose people you care about.. you will cry and sob being from another "world" doesn't change that. I feel liek the theme is about humanity and being Humane is a center topic too now... also the whole medieval fatasy world meets our modern world kinda thing... which i love. Of course... having a new world just open up from no where,,, it mean conflict in our modern world aswell because new things are more reasons too make conflict off... Tho the Clash of medieval Fantasy and modern times is fantastic too me.. the series kinda hides the brutally if post-battles which confused me... it seems too not have a problem about showing how terrible battle can be... but not showing and bodies or wounded lads after the battle? We see a few... hints so too speak but eh... not quite the same. I do believe its the story that will carry the serie.. at least for now, i just hope it won't change into the obigatory harem/fanservice crap that all series simply must have... 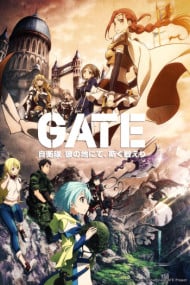 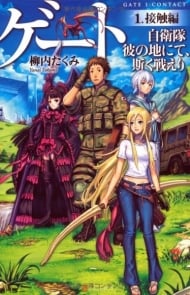 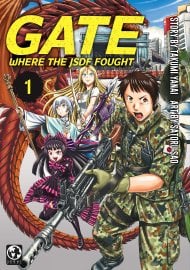 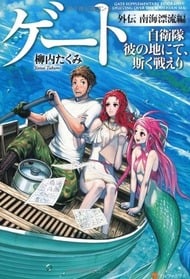 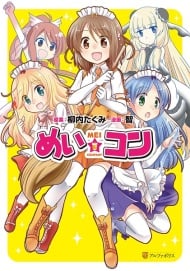 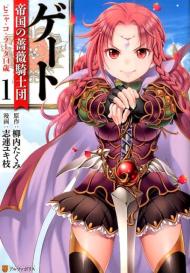 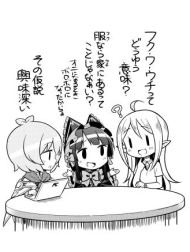 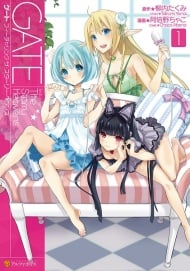