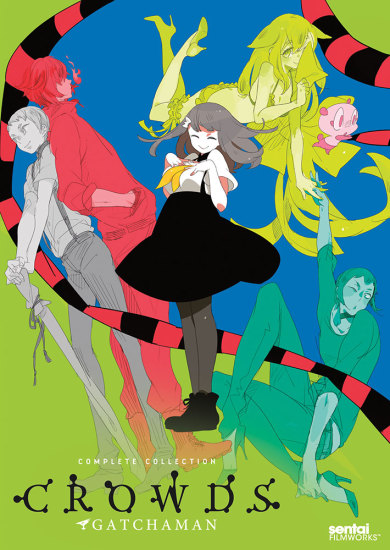 At Hajime's suggestion, the G team decides to go on a PR campaign. Their first stop is a local preschool, where they transform in front of preschoolers and the press, and attempt to inform the public about the dangers of Berg-Katze. Meanwhile, Katze approaches Umeda, a former Hundred member who had been expelled, and sets events in motion in order to bring the world down in flames.

In the year 2010, on a day called ‘Careless Monday', ten missiles hit the cities of Japan; miraculously, there are no casualties and the event quickly fades from public memory. Some time later, Saki Morimi decides to visit Washington, DC on her graduation trip to America, but that day begins a series of bizarre events. After getting into trouble with...

In both of these shows, there's a strain of thought that is saying, "Japan would be better off if we acted like __ rather than __." From this idea comes a pair of social networks, Eden and GALAX, which are then used to help save the world. With plenty of action & interesting characters, fans of either show might enjoy the other.

Gatchaman Crowds and Eden of the east both delve into crowdsourcing and tap into using net software as a medium of hazardous and helpful activities.

Both of these titles show a positive and dangerous side of anonymity.  In one it is hiding behind an avatar and a name such as Gachaman, In Eden of the East there is the factor of Big brother watching and categorizing who you are instantly with tagging and map recognition.

These titles also deconstruct terrorism as a genre in fiction with Gatchaman’s Crowd service used for both good and bad, and Eden of the East flipping it on its ear, by making the “terrorist” use this label only to take blame for actions done with good intentions.

The overall titles are different in storyline, but share the power of many over the one.

Yuki is an introverted teenager whose intense fear of public speaking makes it difficult for him to make friends, so hoping for a fresh start, he moves with his grandmother to the small island of Enoshima. Shortly after his arrival he encounters Haru, a strange youth claiming to be an alien - and what's more, the otherworldly visitor requests his help to...

Aliens, zany characters, very colorful and sleek all around: Tsuritama and Gatchaman Crowds are a perfect match. Both have a very oddball premise that includes using the most mundane of instruments to launch into battles with alien beings. They also have a visual identity that is very distinctive and match the overall craziness very well.

Both have superhero's who try to save the world

Both have some spectacular visuals

Superheros are also visible to the public!