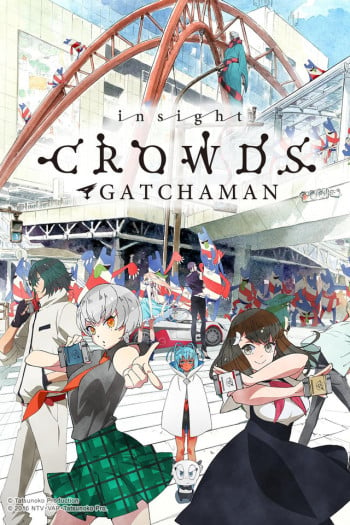 ART: There is no problem with the art but this is pretty hard to mess up these days. The animation does what it is supposed to do and it looks good while doing it.

SOUND: Again no complaints from me. I have watched the anime a few days ago but can no longer remember either the OP or the ED song. This is how I generally prefer it so I'm fine with it. Voice actors did a good job overall.

Gatchaman: The Gatchaman are a group of humans and aliens who have been empowered by JJ, a mysterious alien. With these powers they fight aliens who are bad for humanity. Leader is Paiman, who is an alien himself and looks like a small panda. Although others generally ignore him he constantly orders them around. O.D. is half-alien but looks like a human male. He never uses his power as it is so powerful that he would destroy anything around him. Sugane is charged with mentoring Hajime. He is very serious and believes greatly in justice. Joe was responsible for indoctering Sugane into the Gatchaman and Sugane has deep respect for him. Utsutsu is a very introvert young girl who has trouble controlling her power. O.D. is the one who looks out for her the most.

JJ is an alien and he often speaks in riddles. He rarely leaves the Gatchaman chambers but when he does it is to create a new Gatchaman.

Gelsadra is a powerful alien who visits Earth. He is well known by the Gatchaman as a benevolent alien who wishes to unite the human race.

Tsubasa is the latest addition to the Gatchaman group. She has trouble transforming and often clashes with Hiajime. Like Gelsadra she wants to unite humanity and does everything in her power to help him.

STORY: After the first arc, the cat is out of the bag and both aliens and Gatchaman are exposed to the world. Latest alien who visits Earth is Gelsadra who is held in high regard by the older Gatchaman. Gelsadra visits worlds in order to unite the people living there. Tsubasa, the latest Gatchaman, decides to help him do this. Meanwhile another fight has broken out with the emergence of Red Crowds and public opinion regarding Crowds has been changeing.

RANT: This anime picks up right after the first arc and quickly sets up the events of this arc. Tsubasa and Gelsadra get introduced while the Red Crowds also make an appearance.

Weakest part of this arc were the villains though but this is a bit unfair since Berg Katze was such an amazing villain that others pale in comparisen. When looking at the villains of this arc there are 2.

One is the leader of the Red Crowds but his goal is very clear and that is to discredit the Crowds so that use will be forbidden. He destroys some property but it is not after killing people.

I'm a bit hesitant to call him harmless though. Although he doesn't kill anyone you don't have to do this in order to destroy a life. When you destroy a shop or property there are financial victims. The owner loses his source of income and employees are without a job. It is highly questionable if insurence companies will pay for the damages. If it is not in the policy then they are not obligated to pay up which means that those people whose property he destroyed may very well have gone bankrupt. None of this is mentioned in the anime and it was something I missed personally.

The other villain is tied to Gelsadra and again hard to describe as a true villain. A dangerous situation comes up because of it but there was no real malice involved in any of it. I know where they were going with this part of the story but it is not as powerful as the first season arc.

As a continuation this arc it is good but not as good as the first arc. If you liked the first series then you'll like this one as well.