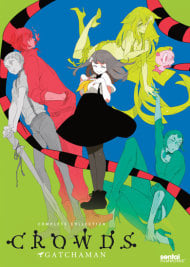 The Gatchaman are a group of superhero fighters rumored to exist in urban legends, blurry pictures and second-hand hearsay. Teenager Hajime Ichinose has heard the gossip, but she never imagined her love of stationery would make her a candidate to be a Gatchaman… as their suits are empowered by cosmic notebooks! Hajime teams up with the stern Sugane Tachibana, aloof Jou Hibiki and other beacons of justice - but the Gatchaman are not this world’s only heroes, as Galax, a social media app, lets anyone use their unique skills to assist in a crisis! Strangers and newfound friends must now band together to stop Berg Katze, a mysterious alien who threatens the world with death and destruction.

Let me open with, I never watched the original Gatchaman series.  I'd stumbled upon crowds while looking through various anime I might want to watch.  It went onto my want to watch list for about a year, then this last week, I went on vacation (and had no internet), so I watched Gatchaman Crowds (along with a few others) while I was away. Also let me appoligize in advance, this is my first review, but when I read through the ones that were posted, I had a pretty strong reaction against it, so I had to write my own. I thoroughly enjoyed it.   Let me ask you, have you ever played the game Bastion?  This gave me a very Bastion-esq feel.  Bastion wasn't that remarkable of a game in and of itself, meh mechanics, not to original of characters, but they had some depth, story was easy to predict.  If it had been just the game, it wouldn't have been that good, but Bastion had 2 things going for it. 1. An absolutely amazing soundtrack. 2. The story progressed in such a way that you wanted to see what was next, even if you knew what would happen. And that is what I meant when I said Gatchaman Crowds was very Bastion-esq.  In and of itself its a pretty boring action anime, with an average plot, and characters that appear to fall into very pre-defined character roles.  However, if you get into it, and watch all the way through, the show is kept light by their surface personality, but they have a lot more depth.  When I started watching, I was sure I would hate Hajime.  By the end, she is easily one of my top 10 favorite heroines, she has a lot more depth than I thought they could put into a "peppy" "optimistic" character.  Now onto each rating. Story The story is pretty mediocre: Aliens, earth in trouble, heroes.  Same stuff different day. That said, they had a nice conflict between wanting a world with heroes, and one without, contrasting the complexity of society, and if heroes are even usefull in such a complicated world.  I'm a sucker for when stuff gets philosophical.  7/10 Animation You get what you see in the screenshots.  You either like it or you don't.  I personally really like the style, and its well done, its not like they slipped any unfinished stuff in (I'm looking at you rail wars...).  9/10 Sound By God the soundtrack for this is my favorite in a long time.  Not only can quite a few pieces stand alone and just be listened to by themselves, but they were so well integrated that it sets an amazing mood in quite a few scenes.  I personally love the fight music, and one piece just titled "Tutu".  Without the music, Crowds would easily be a 6/10, it just wouldn't be that great.  10/10 Characters But Tyranomaster, you said they were pretty standard cookie cutter characters, why would you give them a 9/10?  Look look, your right, I said they were cookie cutter characters, not that original, and various other things.  That said, what the writers did with the characters, how they developed and revealed their personalities, and how they took a lot of archtypes and did different or unexpected things with them made me feel happy.  I was glad that the optimist wasn't blindly optimistic.  I was glad that character re-evaluated themselves either openly, or not.  I was also really glad that they took some archtypes and made ME re-evaluate what I thought characters who fall into that style can be.  My horizons were brodened, so for that, they get a 9/10. Final All in all, much like the game Bastion I would give this a 9.5/10, it has its quarks, sure, but what it does with what is has, and how it all comes together, that is what makes it special.  Its an experience more than an anime, much like how Bastion to me was more of an experience than a game. Once again 9.5/10.

Gatchaman Crowds is the most underrated anime I have ever seen. Story: Gatchaman Crowds is an anime about society, opinions of others, the influence of them, and herd mentality.What happens when people start to rely too much on something and stop thinking for themselves? What happens when people gain power over others that they can use without consequence? This anime handles these very complex subjects in a very lighthearted way and manages to write a good story about it instead of forcing it down your throat It is is a more realistic take on a hero anime where all characters have a very defined and flamboyant personality. They each have their own very different role and perspective on problems. The story begins when an alien named Berg-Katze appaears which turns the leader of the social network app Galax into a Gatchaman. This person gains the ability to give people a power called "Crowds". A big blue alien looking creature which is very strong. Berg-Katze then takes over Crowds powers and tries to spread them around the world. When humans gain the power to anonymously take actions without consequences, it draws out the worst in them. And this is exactly what Berg-Katze wants. To destroy the world by setting people up against themselves. To make humanity's egoistical nature lead to its downfall. Animation: At first glance it seems very basically animated, but the body and facial expression are amazingly executed. They very much fit the characters personalities and the emotions they are trying to express. There are some moments on which animation costs were clearly saved, but those are mostly talking scenes in which nothing drastic is happening. Sound: The soundtrack is stunning. The intro, the outro, the fighting music, and especially the well timed soft tunes that get thrown in during times which seem dramatic. Characters: The cast is extremely diverse and flamboyant, while their true character is actually very subtly pronounced. Each character has a different personality, and personalities which are normally glorified are now questioned. Hajime has by far the most interesting personality I have ever seen in anime. What at first glance appears to be an incredibly stupid girl, is actually someone who pretends to not understand instructions, simply because the instructions were stupid to begin with. Someone who actually questions what's being told to her. Hajime is the strongest and most original character to have ever existed in Anime. The rest of the cast is (aside from sometimes a bit gay) mostly not that interesting. Their reactions and interpretations, their growth as humans when interacting with Hajime and the moment they also start thinking for themselves is what the cast stand out. Overall: The second season of Gatchaman Crowds was, while good, definitely not as strong as the first one, which is the biggest downside. Gatchaman Crowds is the most underrated anime I have ever seen, and anyone who takes a critical look at it will be able to appreciate originality and conflicting opinions more after seeing this anime. 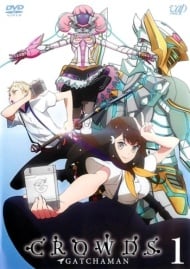 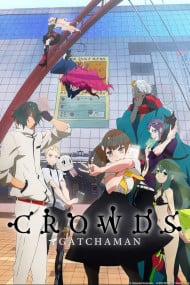 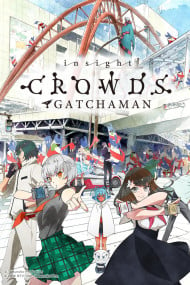 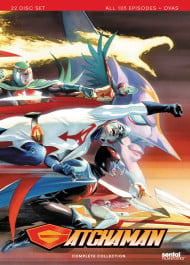