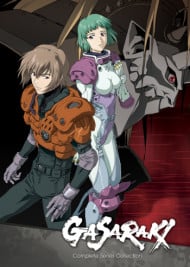 Two major world powers have constructed the most dangerous weapon on earth: Tactical Armor (TA), an elite fighting mecha with extreme agility and fighting strength. Yushiro Gowa is the top TA pilot and captain of the Japanese Self-Defense Force, an orginization that uses the TAs to try and bring honor back to Japan. Yushiro must make a hard decision and face the truth about his past and the secrets of the Gowa family, who will use their adapted spiritual powers to summon Gasaraki and unleash terror on all of mankind.

The show has a very good premise; it combines mysticism, science fiction, and politics. Japan’s public relations with other countries is bad and will soon lead to a war, thus they experiment on new kinds of weapons of mass destruction. Their latest experiment involves the taping of mystical powers through the use of religion and old traditions. With proper handling, this could turn out to be as innovating and ground-breaking as Neon Genesis or Ghost in the Shell. I mean the foundations were right there, so why not?The director is the reason.Gasaraki is directed by Takahashi Ryousuke, the guy who is famous for his Votoms work. He directed many other shows but none managed to have any impact in the industry. The reason is simple, his style is DAMN SLOW. Seriously guys, he just doesn’t like to make an event feel exciting. The mood of the series is great and manages to remain serious and mysterious all the way but whatever happens in the plot is plain dull. Ryousuke is special for going against the norm and never tries to add erotism or cheap shock effects to attract your attention. At the same time he is not replacing these silly elements with subtlety and imposing personalities. He just… throws it at you with no spices and hopes you like it for being plain and straightforward. This doesn’t work. Not even documentaries about teapot collection are going to be interesting without some passion coming out of the whole theme. I have watched this series of board game reviews on the net. Scott, the reviewer, had real passion when he was describing the mechanics of a game. The game itself was usually uninteresting but deat Scott was able to convince me that playing Checkers was the most interesting thing that came out in the past years. Well Ryousuke doesn’t do that; his presentation of an idea is always dull, even if the premise is a hundred times more grand-scaled than Checkers.If you go asking me “Then why did Votoms become such a classic if he is so boring?” I will reply “Because it was an action war drama with a very cool and GAR anti-hero. And because it was the first Real Robots anime. And because its theme was easy to follow, and was always separated into small arcs of stand-alone missions. And because it was UNCOMMON for its era.” Well Gasaraki wasn’t any of that, since there already were other all-time classic shows a few years ago. NGE and the GITS film are fine examples of why it felt so dull. Its production values were average, its characters were not imposing, the action was dull, the pacing was slow, and although it had no fan service it also didn’t have something to replace it with. Enough with the comparisons; let’s stick to the basics. You watch the first episode. Major stuff happen and you are not made to care. You watch the last episode. Blah blah blah, they talk and you don’t understand or care to understand. Stuff blow up, people die, supernatural events alter reality, Japanese traditions overlap everything. And your reaction to all that is yawning. Oh sure, I know people who love this show for ITS PREMISE and because the presentation or the directing are things they don’t give a rat’s ass about. Well I do. And so do many others. Skip that; the most basic thing a show must have is either memorable characters or super shocking events. Gasaraki has none of that. I remember nobody’s name and most of the plot was political and mystical talking I never cared to memorize (despite being VERY detailed and even believable). Add to that dull mecha action, dated visuals, unimpressive soundtrack and colorless dialogues. How could I possibly enjoy this after the stuff I have watched?Bottom line. Thumbs up to the premise. Boo to all the rest. And now for some excused scorings. ART SECTION: 6/10 Analysis: General Artwork 1/2, Character Figures 1/2, Backgrounds 2/2, Animation 1/2, Visual Effects 1/2 SOUND SECTION: 5/10 Analysis: Voice Acting 1/3, Music Themes 2/4, Sound Effects 2/3 STORY SECTION: 6/10 Analysis: Premise 2/2, Pacing 1/2, Complexity 2/2, Plausibility 0/2, Conclusion 1/2 CHARACTER SECTION: 5/10 Analysis: Presence 1/2, Personality 1/2, Backdrop 1/2, Development 1/2, Catharsis 1/2 VALUE SECTION: 2/10 Analysis: Historical Value 0/3, Rewatchability 0/3, Memorability 2/4 ENJOYMENT SECTION: 1/10 Analysis: Art 0/1, Sound 0/2, Story 1/3, Characters 0/4 VERDICT: 4/10 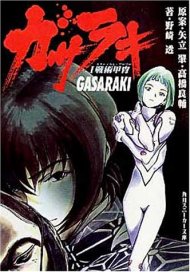