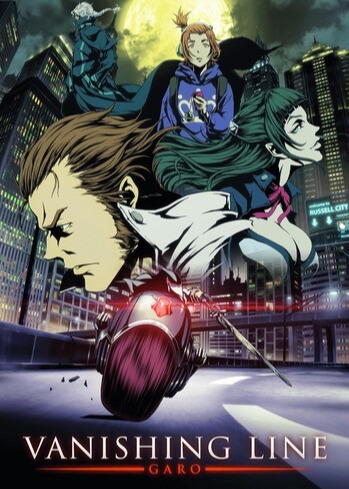 This is a "mature" anime with lots of adults themes and scenes. Aggressive and in your face. Animation flashes and moves in a skilled, artistic way. Think Afro Samurai or Devilman Crybaby. Only flaw is sometimes too fast to really absorb the beauty or horror on screen. 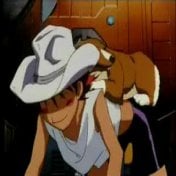 The Garo franchise overall has a bad name. I haven't watched anything else in the series but Vanishing Line has an interesting plot. At times it is predictable but the characters are interesting, voice acting is pretty good and animation is nice.

Not a masterpiece but entertaining!

Okay so after marathoning __Garo: Vanishing Line __over the course of a week I have finally finished the show and here on my complete thoughts on it. Okay, so in all honesty I have very mixed feelings about this show because there are a lot of things I like in it, like them leaving the main city halfway into the show was a really cool thing to happen since most shows don’t do that, they instead just stay in the same fucking setting the whole run of the show, but here we actually go and explore the world with a road trip which was cool since again that is not very common in anime. I also liked that they kill the nun because that was honestly one of the VERY few things that I genuinely did not see coming, and I also liked the character’s overall since they were meant to be over the top as fuck and they accomplished that very well. But then my problems really come in near the ending of the show, with the whole conclusion to the story being predictable as FUCK and I knew that it was going to be like this, but it just got even more predictable the longer you watched it and sure that one scene where the horror basically ******* her brother was creepy as fuck, but that doesn’t make up for the fact that I saw it coming five episodes in advance, also the last episode was rushed as FUUUCCCCKKK like okay let’s go through all the shit that happens, MAJOR SPOILERS START HERE: 1# we had a sword fight with the main bad guy and win, 2# then Sofie is forced to forget everything in the same fucking bullshit way they do it in Fantastic Beasts, 3# then we do a whole bullshit time skip to see how her life is, 4# then Sophie remembers everything and goes to the dinner, 5# and then we still have that a whole conversation about her wanting to become an alchemist OK MAJOR SPOILERS ARE DONE

And all this happens in like 20 minutes, so no wonder this feels cluttered as fuck, because it was. Also it being so cluttered near the end makes no sense to me, when we spend like 2 episodes near the middle of the series on 1 fucking fight. But whatever maybe I’m putting way too much thought into a show that was meant just to be a fun action adventure show with titties and muscle men, so because of this I feel like giving this show overall an 8/10 because even though there are flaws in this show, there are a lot of the elements in it that I really liked, not to mention the music was great and the whole shaky-cam thing they were doing at the beginning quickly stopped in the series which made all the fights much better to watch and not to mention I still enjoyed this show way more than other shows like B: the beginning, Devilman: Crybaby, and Killing Bites which were other dumb action shows that I finished in the last few months. so yeah those were my thoughts in case anyone was wondering😅

The story is intresting, but not amazing or special. The thing that makes the anime the most fun are the characters, especially Sword and Gina. The animation is nice and the music is nice as well. The only thing I didn't really like, but wasnt a huge issue either, was the ending.