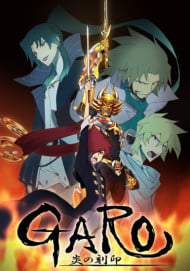 Mendoza, the chief adviser of the king of Valiante, begins a campaign to hunt down "witches," resulting in the deaths of many magical knights and their sorcerer assistants. Anna, a sorceress married to the knight Germán Luis, gives birth to a son before her execution. Germán takes their child, Leon, and flees, raising him to be the heir of the legendary Golden Armor. By the time Leon grows up, Valiante is completely in the control of Mendoza, who drives out Prince Alfonso and his mother. Alphonso decides to seek out the man who inherited the Golden Armor to reclaim the throne and save his people.

Garo. To describe it simply, it's your classic story where the main character inherits his parent's power, and after obtaining it begins saving things.  Story 4/10: Frankly, I did not like the pacing of this show. In the first place, the plot isn't an original concept. I could see everything coming. Now, it's not that unorginal can't be entertaining or great, but it's expected that the show at least stick to the main story or an interesting plot to keep interest. Garo, however, though ok in the beginning, along with one or two episodes of furthuring the main story near the middle, slowly meanders along with its plot. To be more specific, many filler like episodes are played in the beginning and right after an interesting episode near the middle. Some of these only barely added to the overall plot, while several others were completely unnessary. An episodic plot where a character kills a horror/spirit/whatever at the end has been done MANY times, and it wasn't entertaining to see it thoughout this show, when the premise isn't even new. Even the (supposed) main character(and most interesting), Leon is put on the side line repeatedly where I wonder if he's the actual main character. Despite this, at episode 17 the plot begins to faithfully follow relevant main story or actual character development. No, you can't skip to episode 17, there's important stuff before that, but technically you could, because everything that happens isn't that hard to figure out. Animation 9/10: I didn't have any problem with it, and I usually don't when it comes to newer anime. I thought the characters looked cool enough, and stood out with their colorful hair. One complaint is where they went to default horrors at some points, the smaller green lizard-like ones. Which, a group of horrors with more variety would have looked cooler before a battle and been more entertaining. And the what's-it-called 3d animation fit in fine, the amour was what I worried about in the beginning, but I soon came to like it. Suprisingly the amour suits were cool, but the weird roars that constantly came out of them almost seemed funny and kinda ruined most of the 'serious' moments for me. Mabye it was too highpitched a noise? Should have used more of the character's voices for that. Sound 5/10: Neither of the openings were remarkable to me (along with their animation), and none of the music stuck out to me at all.  Characters 6/10: The only reason I give this a 6/10 is because of Leon, who had some good development by the end of the show. It wasn't really suprising development, but it was still good. At first, angstly and sullen, he becomes a quiet 'protector' by the end.  The father character, German, would have been interesting, but he was more like the lazy mentor than the father to me. He sleeps around with women constantly, and his best efforts towards helping Leon towards becoming a true Makai Kishi is 'he's got to figure it out on his own'. I don't know why he expected his kid(Leon) to suddenly want to protect people by telling him that's what he should do when  A.) it NEVER worked before, B.) he's not going to suddenly want to protect some abstract concept like humanity, and C.) when German has the 'figure the rest out alone mindset'. His 'tough love' father character was sort of dissapointing because he didn't seem to care about Leon that much, obviously putting his duty as a knight before all and expecting Leon to do this as well. T_T  Frankly Alfonso was more helpful towards developing Leon's character. Alfonso was a cliche. Likeable, but very much the cliche prince character that never falters in trying to do the right thing. Better than German, to me anyways. Classic villlain, Mendoza. Also cliche. Ema. Thank you for at least having ONE female character the actually acts somewhat independent and can fight in this anime, and she assumes a main secondary character role. Sometimes that's more than you expect. Stupid gender roles. All other characters were either insignificant or seen before in other Anime as simple character cutouts. Overall 6/10: It got better after 17, but those episodes where I was like...Leon is hardly doing anything...this episode is pointless...why am I watching this...makes this average at best to me, though Leon's development was done well (though still nothing we haven't seen before). The concept of the suits was also ok, though at times they came off as almost silly to me.

Story Garo: The Animation is an action/fantasy anime that is based off of and/or a spin off (I'm not sure it's an actual adaptation or a spin-off) of a tokukatsu series called Garo.  I've never seen the original live-action series so I can't compare the anime to it.  That said, as a stand-alone series, this anime is pretty good.  While the story is nothing ground breaking, it does have some decent plot twists and it's pretty entertaining.  It takes a while for the main plot to get going (in fact, the anime feels somewhat episodic at times, especially early on), but once it does, you're in for an action packed ride. Animation Again, while not ground breaking, the animation is pretty decent.  In fact, some of the action scenes are quite well done.  While some people may not like the CG armor, I personaly think that (while somewhat jarring) the armor doesn't look that bad (in fact, I think the armor looks kind of cool). Sound The opening songs are probably either a hit or a miss depending on the veiwer.  I personally like the opening songs, but I'll admit that they don't sound like your typical anime openings.  Personally, I thought that the first ending song was rather underwhelming.  The second ending song was a bit better (in my opinion, at least).  The background music is pretty good and often enhances what is going on (especially the action scenes). Characters The four main characters of this series are Leon, Alfonso, German, and Ema.  In my opinion, German is the best character in the series.  His carefree personality and comedic hijinks help lighten up what is otherwise a pretty dark series.  However, while German provides plenty of comic-relief, he does have a serious side as well and is quite the bad-ass in battle. Ema is (again, in my opinion) the second best character in the series.  Her personality is quite refreshing for a female anime character, and she is also pretty bad-ass (perhaps even more so than German). Leon is more or less the main character (though the show does occasionally put his to the side to forcus on the other characters).  At first, he is pretty hot-headed and revenge driven.  However, later on in the series he goes through quite a bit of character development and becomes less hot-headed and more likable. Alfonso is (in my opinion) the least interesting of the four main characters, but he's still a decent character.  His calmness helps balance out Leon's hot-headedness, and Alfonso and Leon have a good dynamic. Overall If you want a pretty good somewhat dark-ish action/fantasy anime, you'll probably like this series.  It may not be the greatest series ever, but it's quite good and entertaining for what it is. Secret Santa 2015 Review #3

Ok, I,m gonna narrow it down so people will know what I know about this anime.  ● The dad was a hooker and a terrible father. He had a baby with a witch, she got burned, then at the end of the anime (SPOILER TO PEOPLE WHO DIDN'T WATCH IT) he died , then we found out that he made the girl that he was living pregnant ● The son always beaten the dad the frek up for some REASONS.In my defense, he doesn't deserve the golden armor, the prince should have it. ● And there's nothing I got to say about the prince except for the fact he should have that golden armor. 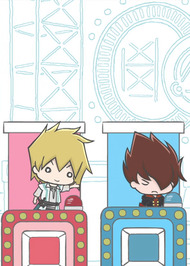 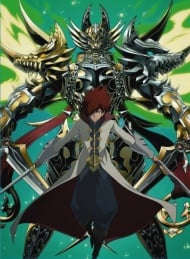 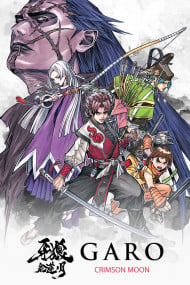 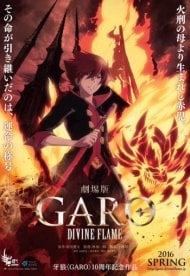 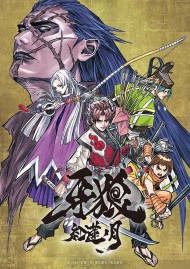 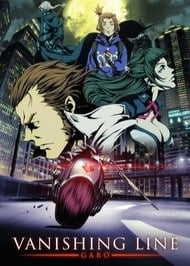