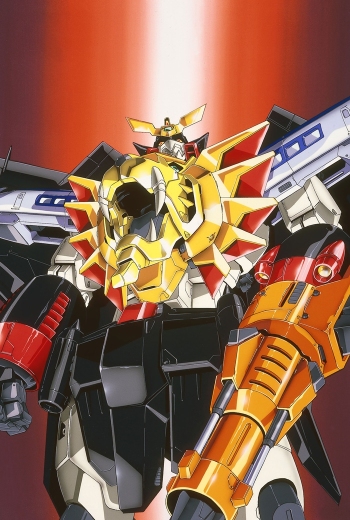 PROLOGUE
This is the last in Sunrise’s franchise of anime titled Yuusha-something and by far the best of them all. This of course easily translates to how all the others were bellow average and forgettable, while this one was more of a collection of all the ideas they had over the years, as well as a tribute to the super robot genre in general. Made around the end of the millennia and directed by a guy with lots of style. Yonetani Yoshitomo has produced lots of minor anime jewels, most of which are sadly forgotten by most. They still count as great retros for me and amongst them I specifically adore Betterman and Brigadoon.

Mecha series usually have around a dozen different robots and gismos but this one is a whole parade. Robots, weapons, spaceships, transformations, upgrades, they go on for miles and there are even specs of them explaining their statistics during interventions. They poured a lot of work in these transfiguring energy-throwing gismos.

The characters are all drawn to look silly. The leading boy in the story has a huge hairdo, half its height. The leading male has this ridiculous wide helmet. The wise scientist keeps flying around with a jet rocket while having his legs spread. And the women… There are no ugly women. And they all wear mini skirts or tight robes and as the show goes on, they show more and more cleavage. Robots included. Eventually though they all look and act generic despite their weird hairstyle and perky demeanor since their characterization is too simple.

The backgrounds aren’t too detailed or uncommon; it’s just generic looking cities and spaceships. The Zondarised areas looked almost nightmarish but all the rest are average.

The animation is great for the time the show was made. I mean they don’t sit still! Everyone moves around all the time and has a wonderful body language that screams of liveliness. Most anime feel like frozen characters flapping their mouths, but not here.

There is a shitload of visual effects of the expected kind; explosions, laser beams and mecha transformations. They look extremely detailed and cool in their choreography. They are also made to be over the top, so you get crazy stuff like a robot attacking with a fire pillar, produced by an electric guitar. Or a mountain of scrap metal, magically morphing into a mecha horse. It’s downright ridiculous but then again this is what makes super robot shows so entertaining. You just need to tolerate the repeating clips of transformations and attacks; since almost a quarter of each episode is wasted on them.

SOUND
If you can stand the really crappy dialogues around justice, love and punishing the evildoers, voice acting is generally good. The main music theme is awesome in terms of acoustic. You will hear it in the intro and in every battle, so it may become annoying. Plus, its lyrics are stupid, so don’t pay attention to them. The ending was a much relaxing elegiac theme that is not to be heard many times in general.

If you put aside the convenient elements, it is an epic tale of man versus machine, protecting your world not only from alien invaders but also from humanity’s pollution, dealing with the selfishness of humans that sell their bodies for power, dealing with love, accepting responsibilities and many others. The basic story is the usual good hearted hero with super robot preventing an alien invasion, but the character’s actions affect the course of events, so it is not clear-cut simple mecha showdowns that decide the outcome.

Of course it is still a silly show for kids and later on for teenagers with a lot of hormones. The pacing is very loose and slow, as there are too many episodes, and the plot is very formulaic to the most part. Everything happens in a most convenient way for the good guys to win and goodness to triumph, which tends to make the whole thing predictable and unexciting in whatever conflicts the story throws to you. Not even by a long shot can the story be seen seriously, everything happens in a childish manner, with “the power of love” being panacea for everything. So in all, it is cheesy alright but that does not make it bad if you get into its style.

CHARACTERS
The cast is likable and somewhat memorable for its weird looks. Their personalities though are extremely simplistic and any thin character development they get is quite predictable and cheesy. And those “I will protect the world from the forces of evil” dialogues are terrible to listen to if you prefer some mature and dark dialogues. Plus, all romantic relations in this show are way too ideal and platonic to actually make an impact on you. After awhile men are just shallow posers and women are eye candy and nothing more. Still, if you go easy on it everyone has his own demeanor and even the villains are half likable.

VALUE
Low chances of watching it again. The story is like a slow fairytale and the plot is childishly stupid. Maybe mecha freaks will keep it around but all the rest will easily dump it for Tengen Toppa Guren Lagann, a series that seems to do the exact same thing in a far more interesting way. But it is still rather memorable for going over the top with the special attacks all the time. I still consider it to be amongst the top super robot shows of all time.

ENJOYMENT
I really liked the initial premise of the story and the lively characters. Then again I hated the terribly fake mecha battles and the formulaic plot. They could have done a lot more with what they had but chose to go for a light presentation full of poser action. I generally half-liked it.