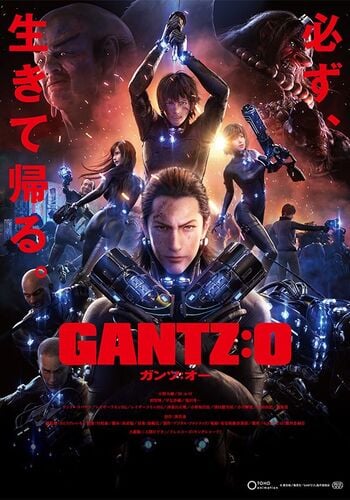 I'll start by saying i expected a lot more when i first saw the trailer. This is made to suck in newbies to the Gantz franchise, but unless you're at least a little bit familiar with it, everything seems foggy and unclear. To the people who read/watched the previous material: it follows the Osaka arc with some major changes.

Basically there's not much to review here. It's a mediocre action sci-fi. CGI was definately the best i've ever seen. Fight scenes are in the gray area, choreography is beautiful but the way these characters think in fights is just nonsense, making it "meh". Nothing good or bad to say about the sound; voice acting is fine and the music is nonexistent, trust me, you won't even notice it due to the ammount of bullshit/awesomness.

The main protagonist Kato is nothing but a moron with a hero complex. Everything he does here is to save others, which almost made this unwatchable for me. He does the same thing all the time; lame jump attacks directed to a very strong monster because he's trying to...yeah you guessed it.. save someone. And as a side note, he actually died twice. First time he was taken to the Gantz room and had to fight, but used the 100pts to free himself. Then he died again..while saving a random stranger. He just doesn't remember it. Honestly, what a fucking retard.

The rest of the fellowship is equally dumb. Big titty Reika, the old man Suzuki, and the teen mommy Yamasaki were pretty much useless the entire time.

Osaka crew was badass looking at first glance, but equally dumb as our hero Kato, just at the other end of the spectrum. They didn't give a shit about anyone else but themselves, which made them overconfident and ultimately, dead.

All things considered, i'm really mad that this turned out such a fluke. But everything i watch lately has the same generic characters with the same personalities you can find in every shounen ever, so i'm not even surprised that much.

One thing is certain tho, i'll never watch this again.

Bro honestly this is the coolest Gmod game mode I've ever played. The graphics look so good that it's almost like it was made by a big anime studio. The mouth animations don't match up with the subtitles and makes it seem that they're speaking a different language than English, like Japanese or something. Most of the NPCs can be asshats or just plain dumb, but some of them are aight. The love interest was pretty dull and boring almost like they thought up some generic female character and slapped it in the code. One of the only good NPCs was that one guy with the mechs, but he got barely any screen time so that got me kind of disappointed. The citizen get in the way all the damn time. Sometimes it makes me think that i'm supposed to shoot the citizens and not the monsters. It'd be cool if there was a setting that wouls turn the citizens off or make the player invisable to them, but that's just me. The story is a little mixed up and hard to understand, but you dont need to have a compelling story when the game is fun right? The items are so cool, but some might be a little out of place. The knives and swords are pretty dumb, and it's annoying how you have to use them. The guns are so cool and fell like they have power behind it. The way that they seem to increase the gravity arround the enemy and squish them is really cool, but the reload time and range aren't that good. It'd be cool if they could like blow up the target and spew guts everywhere, but again that's just me. The bikes are pretty cool but too seem to blow up all the time. The suits have a cool design but their effects and animation look kind of dumpy. And let's not forget those mechs. The big one might look like the stone samurai from Samurai Jack, but it was a fun as hell level to play, and the littler one was fun to dart around the map with. The monsters look they belong in doom in all their 90's monster creativity. And that final boss was a tough one! The first form was kinda fun after I realised I couldn't hit it. Then that one lady form was a tad bit too Lady-like for me, and I kept dying because it gets harder to play when you can only use one hand. Then that cthulu-looking form was the best fight of the game in the mech. Getting to fight in one of those big robots made me feel like I was in pacific rim. That bald form was hard to finish because he kept me on my toes the whole time. But Bro. That final form looked amazing and the fight was hard-fought with all those damn quick time events, but it felt satisfying after I beat him. Overall this was the most fun I've had playing a Gmod game mode dispite the glitches and bugs here and there. I would seriously recommend this to anyone who still plays and enjoys Gmod to this day.

YES a thousand times yes , gantz is back and not shit like gonzo made it , this movie is great , there is alot of subtlety in this anime and i was only really abel to pick up on some stuff because iv read the manga and being that i read teh manga i pretty much preicted how it ended and i was right seeing as its a mosty faithful reimagining , except for maybe the beggining and the end and even then its not that far off , little changes to make it a movie that fits into the time its given rather than set up for sequels like most hollywood movies would do or movies in general although its major flaw is that it is infact a movie and not a series

story: the story is mostly the osaka arc from the manga ( aka GANTZ O clever bastards aint they ) where kato takes the helm after keis death , and we get to see him develop from green horn noivce to clever bad ass , iv seen some mixed reveiws on this film saying it fails as a film but it really dosent , that may be because of my bias to the manga . any ways a group of vanruble people fighting aliens , really begs a qustion of what it means to be a hero as most of these people are thrust into a hero like role while only worrying about them selfs and own surviva. the amount of death and vunrability that is shown in this film really subtly shows kato as more of a hero than say super man , as superman pretty much is invincable.

Animation: FINALY a cgi anime that dosent look like shit and is on par with the wests cgi , not that all west cg is good but same could be argued for easts 2d animation so i digress , there is a little bit of censorship , not alot but some not a big deal as it basicly says fuck that and just throws censoship out the window eventualy. this is what thefans want to see when we hear " cgi" i also really liked some of the weapon redisgns

sound : other than the dub being ok but with this level of cgi its hard to dub it , wich made me switch to subs after like 3 miniutes because of bad lip sync not the dubs fault mind you the sounds were all great the aliens roars where scaryish and every sound just made sence as well as voice acting was on par

charcters , its hard to judge charcters in movies as well its a movie charcters dont have much time to develop or really get into our hearts or under our skin i find it hard to love or hate movie charcters , and i really dont wanna get into the manga but id have to say they were still done justice all charcters acted and behaved the way i expected them too based on previous itterations ( manga previous anime ) but it didnt really add anything new to the table in terms of charcters

in conclusion its a good film with great source material and i really hope this spawns a series , the one fatal flaw in this film is thats well its a film not a series and the weird  and wacky monsters as well as gratutios violence and fan service can only be done in an anime series to its fullest potential , if there is a reboot i really hope studio made house or bones picks it up as they have rebooted some really great series , like hunter x hunter and hellsing , and for bones they rebooted tehir own full metal alcemist . none teh less im still glad gantz has not been forgotten about and i hope to see more