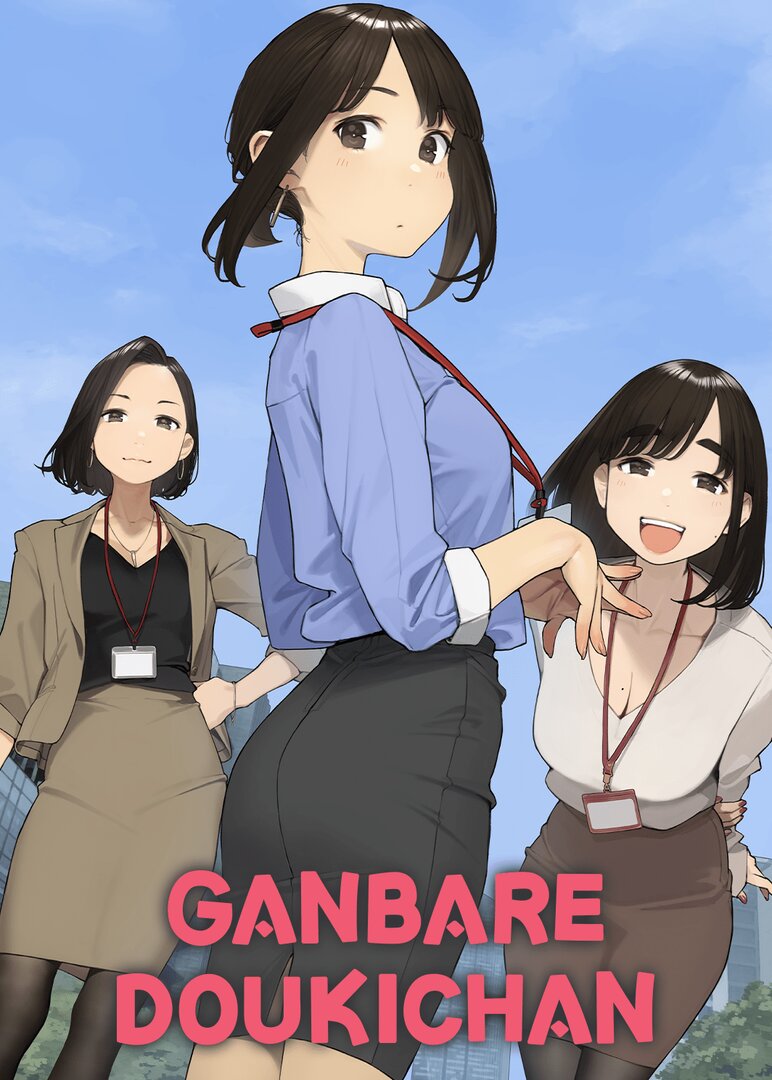 Each episode of AtelierPontdarc’s 2021 gem barely lasts five minutes (including opening and closing titles) yet this is quite a charming little series. This is a great example of just how good a simple romance tale can be if you set it in an office. Why do so few animes focus on office life? Is there something about Japanese culture that fixates on JK imagery to the exception of all other work experience? The more senior members of the anime community, who have experienced office life, simply are not catered for. The quasi-erotic imagery of the female form in manga/anime is so highly focused on school &/or fantasy that we easily forget that the same aesthetic can be applied to young ladies and gentlemen in other formats. Hence a niche sub-genre opened up portraying attractive young women in office attire being cute and incredibly sexy. If your taste is for that sort of thing then you will like Ganbare Doki-chan.

Doki-chan is a pretty (if not overly beautiful or popular) young office worker who comes to work each day in obligatory workwear of short, tight, black skirt and fitted shirt. She has a mad crush on Doki-kun who works next to her but she is shy and finds it hard to express how she feels. The story opens with her arranging “accidentally” to end up in the same hotel room as him on a business trip. Yet the plan is thwarted when Doki-kun inevitably behaves like the perfect gentleman and doesn’t touch her. Then they get stuck in a lift together with similar lack of outcome. Then there is her plan for Valentine’s Day. She has made him chocolates and whilst she works up courage to give it to him, he is whisked out of the office by her arch-rival. Will her love remain forever unrequited? It is certain that he does have eyes for her but can she turn it to her advantage? What is cute here is how the office girls she considers to be her rivals are actually trying to help her. If only the clueless girl would get the hint.

‘Ganbare, Douki-chan’ is over all too quickly but our hats off to doujin artist Yomu who serialised this whole thing originally on Twitter in 2019. What a star. It is worth comparing this to “Tawawa on Monday” (Pine Jam/season 1 2016 & Yokohama Animation Laboratory/season 2 2021) to which it bears an uncanny resemblance. ‘Ganbare, Douki-chan’ is superior.

Ganbare, Douki-chan was a short but sweet romcom. It felt like a more polished compared to Tawawa on Monday 2, which was a show  released in the same season in almost the exact same format.

But let's keep it real and simple, the male just seems a bit of a push over, which is what really creates this whole awkward situation.

Visually the show is pretty consistent. I did bring up the Tawawa on Monday 2 anime because I feel they're trying to be in the same lane at the same time. I appreciated this more, just overall a slightly better and more polished product.

This micro series of 5 minute episodes, was a nice little surprise of a mixture of romance and comedy. Douki-chan is a typical office worker who has a crush on her male co-worker, and these episodes are her adventures in trying to win his heart, which of course is never easy in this type of anime!

It's a simple story and despite its short running time, there is a decent amount of character development, just minimal time to do so. Douki wants to go for it with her male friend but of course needs the guts to do so, of course trying to beat around the bush to get to the point, which takes so long it never seems to work out, but the by the end we can see they are on their way.

In her way is her junior Kouhai, a flirty and curvaceous co-worker who wants "sempai" all for herself and will pop up when she's not wanted to interfere with the progress. Later on we met a former co-worker of Douki's love interest, older and more experienced, and also very curvaceous who's flirty but more subtle than Kouhai.

The title fits with theme with the series, as you find yourself cheering for Douki-chan and hope she gets her man, and the humorous moments that result from her attempts.

The animation is pretty good for a short series, and doesn't seem like they cut corners to make it look good. I guess you can spend a little more on animation when the episodes are very short. At the end of each episode, we see an artwork still of Douki-chan usually, and it's always gorgeous.

Not sure why they chose this format. I think they could have done a short series of longer episodes, or maybe they thought they didn't have enough material for a full fledged series. Nevertheless the format they chose works and works well, and has a decent conclusion. Let's just hope for a continuation of the series.

This is pretty much the manga up to episode 52 (including the OVA), with the intermediary images added to make something actually animated. The animation isn’t as clean as the original illustrations, but does a better job at it than Tawawa on Monday. Also, just like in Miru Tights from the same author, each episode finishes on an original illustration, without much to do with the story-line. Finally, they managed to make Kouhai-chan even more of a slut than in the original material, which is a feat in itself.

Ganbare Douki-chan is series of shorts about a woman who wants to get railed by her coworker. Relatable, right? Although I'm not into fan service or women, everyone's an adult here and if it was only fan service, I'd give this a 5/10 and say "to each their own". But the show fails much deeper than that: the main character consistently dolls herself up and pretends to be unconscious while in compromising positions, expecting the male lead to rape her, and is disappointed when he doesn't make a move on her.

Problematic media can be fine, and can be a great coping mechanism for viewers with trauma. Feeling a complete loss of control can be therapeutic for those who have been sexually assaulted. This show doesn't do that. It provides a faceless male lead as a self-insert for men who wish to rape their coworker without consequences because she secretly enjoyed it. If I could give this negative stars, I would. The only redeeming factor is the relative obscurity and low ratings of this show. Fortunately, the audience doesn't seem to want that either.