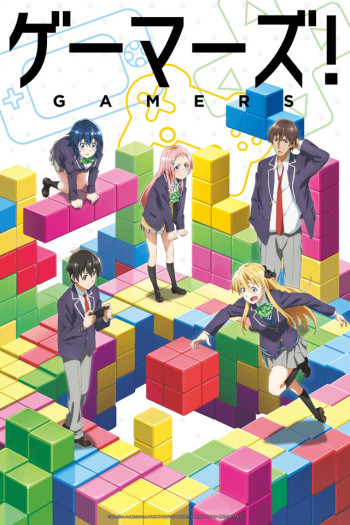 These two shows use comedy as their strength to progress whatever story they are going for, alongside the quirky characters and vibrant colour schemes.However, D-Frag has used other comedic methods that stray away from the video game spectrum to focus on other game styles whereas Gamers! does stick with the video gaming theme. Even so, these two anime have similar styles of story telling and characters, I think if you enjoyed one you might enjoy the other.

Both are about gaming clubs at school and focus more on the character interactions than games themselves (opposite to shows like No Game No Life). In particular, Gamers! is a little more about relationship hijinks (i.e. high school dating "drama"), While D-Frag fits some of the more typical 'High school anime' stereotypes, and character personalities.

Both are about video games and are good. They are similar. This last sentence is filling out the minimum characters.

If you liked Gamers! or D-Frag!, then you'll probably like the other one because both anime center around gaming and completely crazy antics that ensue becasue of it. D-Frag! is general gaming, where as Gamers! is all about video gaming. However, the slapstick gag-style comedy is equally befitting of both. Plus, most of the characters from both are weird, quirky, or just plain crazy at times.

Both are fun, lighthearted anime implimenting video game culture, and the relationships between the characters involved.

They are both about introverted video-game addicts who are pulled out of their shells. Although one is about an MMORPG player and the other a handheld addict, they are both comedies and SOLs and share a main theme.

There is a cute awkwardness between the leads of the individual shows that blossoms into a romance. Good catch for those who like romance-type animes.

Both shows have characters, who are very much into gaming, and enjoy it a lot. Both, however, do not focus only on the game, but also a romance between the main characters. There's a good amount of references and game-related details, that'll make you smile if you like games. Both main characters of the shows, are introverted and quite self-concious. the 'cast' of Gamers! is a lot younger than that of Recovery of an MMO Junkie, but the theme is much the same.

Both are about gamers and have a game club, they are very similar but at the same time very different, they contain a romcom aspect to it as well. In Netoge the MC joins the newly created gamers club for him and his newly made friends so they can game after school, where as in Gamers! the club president tries recruiting Amano but isn't successful. If you like one you'll like the other.

Both meet in an activities club to play their common passion: video games.

Some characters are really similar, both share a girl who has difficulty adapting outside the world of video games.

Both anime is about games and the heroine likes the MC but the MC declined at first. Both are fun to watch and funny. The setting is both at school

Both Hi Score Girl and Gamers! are rom-coms that involve charcaters that are deeply invested in video games.

Both share slice of life, relationship qualities along with the shared   enthusiasm for everything video games.

Both are based on a group of gamers or otakus who meet in a club of activities based on leisure; video games, anime ...

Their day to day, relationships, interests and conflicts.

It shares a general story, approach to telling it, style, comical twists, setting, look, genres, and types of characters between SNAFU and Gamers!  Snafu lacks a natural feel; is a bit stiff in delivery; the lead is a bit too stoic and stone faced too much of the time to keep things so fresh; and has that whole attraction conflict between straight attractions to the two lead ladies and to one of the other lead men.  It is the confusion on his preferences that make it less delighteful.  Gamers  focuses on comedy surrounding those relationships and the confusion the characters have for each other due to all the misperceptions, misunderstandings, and opposing viewpoints that never seem to match reality.  Snafu also spends a bit too much effort allowing or setting up the main character to be the lacky fall guy for everyone's problems without satisfactory acknowledgement or appreciation for his sacrifices.  It only adds to the lack of logic why he is so anti social yet gives up so much for strangers in a way that contradicts itself.  But watcihing him get the abuse and flak loses my interest after about the third time it happens without any positive result forthcoming for him.

We kind of get that same thing with Keita who is often the butt of everyone's problems while taking it either in stride or idiotic simplicity and ignorance.

Orange is a serious story centered on a type of time travel sci fi gimmick while Gamers is a social comedy about a group of friends who meet and grow strong as friends inexplicably from a series of coincidences.  The focus and relationship among the friends is remarkably similar in both stories.  In both how they all meet up and how they interact and try to spend time together to support each other while avoiding traumas that could irrevocably hurt them.

Both of these have a funny, goofy feel to them and one of the main characters (in GD) is a gamer too. Both also take part in schools mostly.

This is another decent romance-comedy anime, although, a lot more decent than Gamers. Again, there’s more to the quality of the gag/comedy than the plot, but oh my, the characters in Gekkan Shoujo Nozakikun are absolutely loveable.

Chiyo has a repertoire of giffable facial expressions that brighten up your day, and Nozakikun is the biggest troll anime has ever had.

What’s special about this anime?

- The music matches very well with the anime.

Both Anime’s are about normal school life with no big changes from real life, both are very good and deserve a watch.