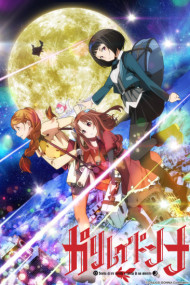 Galilei Donna follows the three Ferrari sisters who are descendents of the astronomer, Galileo Galilei. The year is 2061 and the world is in the grips of another ice age. With a mysterious organization hunting them down and searching for the “Galilei Donna”, the three sisters must work together to fight against the organization and discover their true destinies.

What I Liked: The soundtrack, for the most part, portrayed a great sense of adventure and wonderment. The character designs. The designs for the inventions and mechs were creative. Set designs were perfect for the genre. Action scenes were well done, with great integration of 3D elements. Cinciho, despite his wobbly characterisation. The first episode was intriguing enough. What I Didn't: Heavy use of convenient plot points. While things seem to just happen, it never feels cohesive. Constant Mood Whiplash and pacing issues. The grating and unremarkable Opening Theme. Episode 6, for going heavy-handed with the "Humans Are Bastards" trope. World-building feels lacking, and set designs didn't really give me a sense of "Future Europe in the Midst of an Ice Age". The last three episodes, from the time-travel romance filled with crap anachronisms to the utterly boring kangaroo court and its "twist". The train-wreck of an ending. Show handles death in a very indifferent manner. Boring corporate sleaze villians. Characterisation for nearly every character is practically non-existant. Phone hair. Final Verdict: Galilei Donna starts off promisingly enough but trips over itself straight out of the gate, revealing itself to be a tonally inconsistent and banal adventure series that lacks any form of tension or mystery. While it is visually and aurally wonderful with its imaginative mech designs and strong soundtrack, everything else about it is frustratingly inadequte from the flat characters to the way things just conveniantly fall into the laps of the three young protagonists. All in all, Galilei Donna was a unfortunate mess that left me cold.