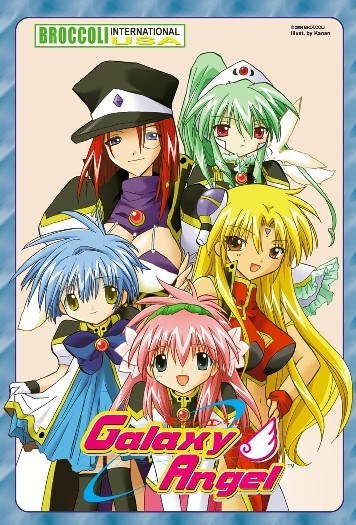 Story
The first and most important thing to mention is that Galaxy Angel does not have any sort of plot, at all. Each episode is completely seperate from the next, leaving no room for story development or anything concrete. In addition, time passes randomly in between each episode, with the crew not necessarily starting off in the next episode where they left off in the last. In one episode, the girls might have crashed on a desert island. In another, two of them might have been seperated and are boarding a space base. The key is to go into the series knowing and understanding it will be 100% random, and leaving your brain behind.

In general, the mini stories themselves range from gut-busting funny to dreary and uninteresting. Unfortunately, as far as I'm concerned, it tended to stay more on the dreary side than the funny. Admittedly there were several times in the series where I laughed out loud, usually from a completely random moment that caught me off guard. For the most part, though, it just seemed like it was trying too hard. I rarely cracked a smile the majority of the time, and for 26 episodes (even at only 10 minutes each), that isn't really a good thing. In fact, I think the only "really funny" episodes I saw were less than 5.

The randomness might remind you of Di Gi Charat, and for good reason -- the same studio created both. I think that was another failing of the show: it tried too hard to be like Di Gi Charat, and just didn't work well. Broccoli (the studio in question) obviously wanted to cash in on the idea of another Di Gi Charat (since the franchise made so much money) by creating a clone of sorts, but it ended up being not as original and just not as funny in general. I think what made Di Gi Charat so much better was the messed up randomness, whereas Galaxy Angel was more on the cute side, with situations that just weren't as funny. It's hard to explain, I just felt like GA was trying to rip off DGC's concept, and failed.

So, a 6.5 for the story score. This is based nothing on actual plot, since there was none, but since there still were truly funny moments that made me giggle, it gets a decent score nonetheless. Nomad in particular (the suicidal AI in the body of a stuffed animal) helped the show out quite a bit, often making the mini stories more amusing.
Animation
The visuals of Galaxy Angel were definitely pleasing, though perhaps not unusual enough to warrant a higher score. The characters were designed to look super sweet and cute, especially the cat-girl-lookalike Mint and the vaguely robotic looking Vanilla. Nomad was very cute as well, with scribbled on eyes and a look that fit his completely opposite personality well. Think of it like the baby in Family Guy, that's the cute to evil ratio I'm talking about. ;) The one design I especially didn't like, though, was Forte, whose ridiculously large breasts were borderlining Gravion/Divergence Eve ridiculousness, and really didn't need to be there at all. Her terrible outfits didn't help the matter either.

Colors used were very pastel, but still vibrant and pleasing. Ranpha wore a bright red dress, in contrast to Mint and Vanilla's blues and greens. Backgrounds were detailed and well done. CG was used for the spaceships (which were on screen a very small percentage of the time), and it definitely did look cheesy. Then again, the time period in which this was made was full of cheesy spaceship CG, so that's OK.
Sound
The music really was a disappointment because of the lack of songs played throughout the show. The one main bouncy track played often was good, but heavily overplayed during action/running/random scenes, with no other song to take its place occasionally. The intro was catchy and upbeat, as well as the ending, but they had the exact same sort of feel as the main track I just mentioned, which made it seem even more overkill. One other song in particular was a testament to the whole "ripping off Di Gi Charat" idea, with a flute playing the melody and notes only a few off from one of the main songs in Di Gi Charat. Every time it would play I would be reminded of DGC, but the notes would change at the last minute to be something "unique" and "different"... right.

The voice actors actually did a good job, I especially loved Nomad's robotic echoing voice. It always seemed to spruce up the humor-level of the scenes, since the actual content didn't help in the long run. However, Forte's character (once again) was the only source of annoyment, with a voice that clearly sounded like a man's. If it wasn't for the huge oversized breasts, I would have easily thought the character was male the entire series, not only for the voice but also the very man-like character design.
Characters
Galaxy Angel's characters definitely didn't top the character development chart by any means. Due to the show's randomness, the main function of the characters were to fit their wacky roles and help create laughs and hijinks for the viewers. For some character, this worked out well: Nomad, as I've mentioned a few times, was an exceptional secondary character who always put a smile on my face. Although characters like Milfeulle fit their whiny/airheaded role perfectly, it still doesn't mean I enjoyed it very much. Forte (yet again) was too man-like for my tastes. And let's face it, some of the character roles were generic and unexciting. Forte was a person who loved guns and violence -- not so unique. Mint wasn't very fleshed out at all, with the only unique characteristics being her royal ancestry and her bizarre ears. I believe the randomness could have succeeded much more if the characters had a bit more of a wacky flair, with unique things that made them as random as the plot. Unfortunately, besides the few characters, I felt most were fairly forgettable.

A decent score for generally fitting the roles and a few shining stars of the cast, but for the most part, unexciting characters.
Overall
I'm fairly mixed on what to think about Galaxy Angel. I love shows with bouts of randomness, so GA satisfied me in some regards -- but not many. While hilariousness abounded in a few episodes, the rest seemed too lackluster and wannabee Di Gi Charat-ish for my tastes. Combined with not so great music, a limp (for the most part) cast of characters and decent visuals, I think a score of 6.5 (slightly above average) is fair in this case. If you are looking for light hearted humor shows with cute characters and such, you may get a kick out of this.

Premise: There’s a squad of skilled young women assigned to search for the Lost Technology. Unfortunately, no one knows where it was lost or even what it was, so they end up traveling all over doing odd jobs for people instead.

Humor: Galaxy Angel relies upon a mix of the unexpected and the ridiculous to cause laughter. You never know where the girls are going to be or what they’ll end up doing in the next episode, so there’s plenty of random humor.

Characters: All the girls are different, each with a very obvious strength. The perks, in my opinion, are the hidden traits. An unexpected fear, a secret hobby… they make me laugh. Keep in mind that no one is really well rounded here, but watching Random anime for character development doesn’t work well.

Missions: I’ve no idea how most of these jobs are actually supposed to help find the Lost Technology, but I do enjoy watching the Angel Brigade in distress. Don’t take them too seriously, and you’ll be a happy camper.

Overall: While not as random as other shows, Galaxy Angel is a good source of entertainment. I support this anime. :)

What I Liked: Forte. Normad. Voice acting is great all round and sounds nicely diverse; I especially love Ryoko Shintani as Milfeulle. Great character designs, even if Forte's and Ranpha's are a little… oddly ventilated. The fact that the show restrained itself to its half-length format instead of resorting to multi-episode arcs. The OP and ED are super catchy without being overly cheesy.

What I Didn't: The show's not very good at mixing serious moments with silly ones. The last three episodes are (almost) complete mood-killers. The main characters tend to fall into particular stereotypes, despite working well together. Soundtrack is nothing to write home about.

Final Verdict: A comedic spin-off to an obscure RTS dating sim, Galaxy Angel is another one of those shows that's like the anime embodiment of M&Ms - sugary but unfullfilling with not a lot of substance. Still, it's bright and colourful with an amusing (and well-acted) cast and a decent amount of random zaniness to put one in a good mood.