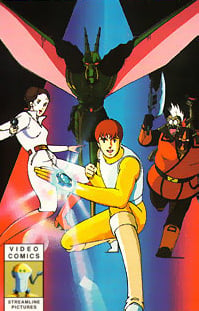 Winston Smith works for the Ministry of Truth in London, chief city of Airstrip One. Big Brother stares out from every poster, the Thought Police uncover every act of betrayal. When Winston finds love with Julia, he discovers that life does not have to be dull and deadening, and awakens to new possibilities. Despite the police helicopters that hover and circle overhead, Winston and Julia begin to question the Party; they are drawn towards conspiracy. Yet Big Brother will not tolerate dissent - even in the mind. For those with original thoughts they invented Room 101...

Rune Balot is a prostitute who is nearly murdered by Ciel, an enigmatic casino manager, who suffers from a disease that forces him to remove and store his memories. A victim for most of her life, Rune faces a choice. While on the brink of death, she is given the opportunity to live. It is not a simple choice for a victim, but Rune takes it. A professor brings Rune back to life as a cyborg with the ability to control electronics and partners her up with a self-aware universal tool named Oeufcocque. Together they begin to unravel the mystery behind Ciel, and Rune sheds the role of the victim but must struggle between seeking justice and vengeance.

The war on terror exploded, literally, the day Sarajevo was destroyed by a homemade nuclear device. The leading democracies transformed into total surveillance states, and the developing world has drowned under a wave of genocides. The mysterious American John Paul seems to be behind the collapse of the world system, and it's up to intelligence agent Clavis Shepherd to track John Paul across the wreckage of civilizations and to find the true heart of darkness—a genocidal organ.

This world has been destroyed once before. In the year 2060, a huge meteor landed in the center of the North Pole causing global disasters, but also bringing opportunities for evolution through "The Crystal From Other Side". Now, humans make their home in the sky in the city of Utopia. But the sky is filled with endless crusades. The Number 85 District, the largest of the sky fortresses, slowly repels the attacks from invading alien forces and terrorists in the shadows. Lu, a young orphan, joins the crew of the Flying Dolphin at the right time. The "Original Impact of Doomsday" symbolizes the beginning of a new world. This is the best and the most beautiful time in the history - until he appears...

Yorozu Genkurou, wandering warrior, possesses an huge sword which makes him redoubtable to his enemies. While he crosses a dark forest, he suddenly sees the fall of what looks very much like a spaceship. Since, he is constantly being attacked by strange ninjas and ambitous fighters. Indeed, he will soon realize that his assailants are nothing else than aliens landed on Earth to find 3 artifacts made of Orichalcum, an alien substance with powerful mystical virtues. And one of the artifacts is the sword he wears. The hunt begins.