Alt titles: Gyaru to Kyouryuu, My Roomie Is a Dino 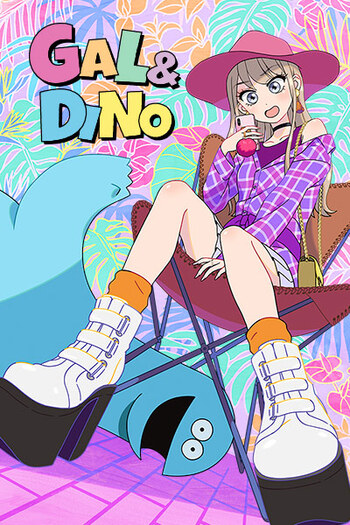 "WARNING DO NOT WATCH THIS" I ended up watching this, looking for a comedy from the serious animes I had watched recently. But boy, did I make a mistake, there is no point to anything that happens in this show.

The joke of this show is a girl, gets drunk on a night out and brings home a dinosaur. This joke loses its strength after the first episode, as the female character kaede just strugs it off and moves on with her life. Every opportunity to explore what it would really be like to have a dinosaur living with you,isn't taken here. Plot points are brought up only to go nowhere, leaving you thinking the story was about to get a purpose to it all.

Don't get me wrong I have nothing against nonessense comedy, if it's funny, but none of the jokes here are funny. I didn't laugh once and this is meant to be a comedy anime. Worst sin this anime does is that it's not even an anime. What I mean by that is half of each episode is in live action. If you want to call to yourself an animated series. Every episode should be animated at a bear minimum.

The character Dino has unexplained powers, where he can teleport you to different locations and turn your dream into reality. I guess this is just for kids and a quick way to skip scenes, because later on the Dino has to take a taxi. Also be ready for annoying noises as Dino makes a lot, like his arms make lightsaber sounds.

Even the creators didn't even know where they wanted this show to go, as about half way through. The animated and the live action half start telling the same story just with slight differences like in the missing pet episode, it's a cat Dino finds in the live action half and a bird in the animated half. Making this even more pointless and it all ends in nothing. Kaede and Dino simply leave a beach they went to and it just ends.

When you first watch this around the second episode, you think it's going somewhere with a magic/wizard it's not really explained. Has a book to change time, where he's trying to save dinos original owner, which the anime does a terrible job explaining. This wizard character never appears again nor is it ever explained. It just moves on into more nonesense.

The animated side of the show has very basic animation. I wasn't expecting some epic animation for a comedy like this. But the line work doesn't even looked finished, so it's bad. But you wouldn't expect more. The live action side of the show, is just like why is it even here. If I wanted to watch a live action show, I'd just do that. I signed up to watch an anime, I was sitting there like " where's my anime"

In conclusion there is no point to this show, it doesn't even class as an anime due to half of the whole show being in live action. The comedy isn't funny here at all, which is the main purpose of a comedy show. So it already fails from the start. I can list a bunch of way better comedy animes, don't waste your time with this. It's just mind numbingly boring and completely pointless garbage. Heed my warning, do not watch this trash.

Bruh idk why so many people hate on this show! Gal & Dino is literally like just so cute and such a laid back experience that I feel that anyone can really just enjoy and passively chill with. Will it enlighten you or revolutionize your perspective on life? Nah. But its sooooo cute.

The pacing I feel can feel a bit dragging, the comedy is quite repetitive, and A LOT of things really don't make sense at all but thats what I feel makes it so funny. The animation really reminds me of Osomatsu-san and how they would use so many mediums and colors, which I LOVE. Ugh the incredible about of effort and love that was put into this project from the animation aspect is insanee, full respect to all the people involved. Claymation, animation, live action, food-mation?, doodle 2-D animation, and so much more is explored to tell cute and dumb stories about a dinosaur and some chick who really is not really a diva she just dresses nice lol.

This show is very much garnered towards kids, so its not intelectual at all, and it never tries to lol (tho ngl some scenes r kinda sus lolol). Other than Dino, the characters can flatline a bit (except for the crazy side character looool) but they don't get on your nerves. Idk who was on the soundboard but they went CRAZY like wtf is with all the random airhorns, lightsaber, dubstep sound effects, oh yah thats what adults think kids think is funny?

lol bruh idk bottom line this is a chill show and I would recommend to watch this if you need something to cheer you up a bit and if you enjoy really creative animation.

Favorite episode: Burh I cant decide every episode has there really good moments n but idk I thought #11 was really funny.