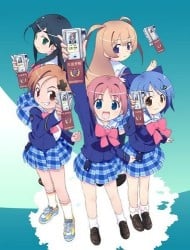 STORY Gakuen Utopia Manabi Straight! is a simple moe comedy story about an all-female Student Council set to motivate and inspire the fellow students. There really isn't anything special to it, but somehow, it all adds up to a very, very fine anime experience. Let me explain. The plot deals with a future in which high school is no longer a requirement; most teens just start working for a living. This is somehow the result of a decline in birthrate, and an aging population. This is not explained much further and, to be honest, it does not at all matter to the rest of the story. It is just to explain why many high school students think about quitting school and starting to work instead, and why student morale is so low. The school of our focus is Saioh High School, where a quirky and insanely energetic new transfer student, Amamiya Manami ("Manabi"), witnesses a dull start-of-the-year ceremony, and a shy and clumsy girl, Inamori Mika, trying in vain to recruit members for the Student Council. Manabi then joins Mika, actually taking the lead, and together they try to expand the council to be a force that can bring the fun of high school life, back into high school life. In the process, Mika and Manabi are joined by the sporty, popular tomboy Mutsuki and the serious, studious Mei. More on the background there is video-blogger Momoha, lending a hand in her own way. The five girls start a charm offensive to motivate and inspire the students in a positive way, and have plenty of fun for themselves as well. It is clear what the moral of the story is: treasure your high school days; have fun and make the best of it! CHARACTERS It must be equally obvious by now, that the characters follow an expected pattern for a school-based anime about a group of girls. This is not a problem at all. Each one is adorable in her own right. What really wins, is the chemistry of the group, and the humour among themselves. There were moments I really laughed aloud, which is quite rare. Actually, the Student Council's antics, their joys and disappointments, managed to touch me deeply. I'd actually have a lump in my throat or shed a "happy tear" (don't laugh at me!) when the young ladies overcame their obstacles. As well as at the end... There is no ecchi here, and there doesn't need to be. This is heart-melting kawaii-ness all the way, and I am not even so easily charmed by high schoolers. It glorifies the lives of girls but does not sexualise it. After so many ecchi animes, this actually came as a relief. ;) There is one more character that was such a good find. Shimojima is a teacher who is frequently late due to having been out drinking, and who has no qualms about smoking cigs in the teacher's office while his colleagues are eating - even if they give him stink-eye for it. But he kind of acts as the Student Council girls' protector, and gives up a lot of his free time driving them around. All that, and he's not even a pervert. He's the kind of teacher we all would have wanted.  ANIMATION The animation for this series is very well done. It's very smooth and shiny looking and gives the whole anime a pleasant glow. It's sparkly and colourful, although if the mood changes the colouring changes accordingly. Visual character design is almost irresistably moe! The "camera" is set so that a lot of the humour is quite unexpected and often comes from the background or just outside the viewer's view, giving it the advantage of surprise. The opening and ending sequences are wonderful in their own right. Especially the claymation ending is absurdly cute. Ah - you'll just have to see for yourself, of course. CONCLUSION All in all, somehow - and I'm still not sure exactly how - UFOtable has created a tremendous feel-good story using minimal resources. What I mean to say is that there is very little that we haven't seen before in animes such as this, but it just WORKS. It works like a workhorse. As I said, it brought me a laugh and a tear almost every episode, and if you're in any way like me, you'll really start to feel like you want Manabi & co. to succeed in their goals.    I think, secretly, this is worth a 9 out of 9. Really high scores in review seem to be unfashionable, but I'll just go with my feeling.

Another day another anime another review where i have to come up with interesting things to say about said anime. But this is not just any other day,it's a rainy day and i'm dead tired.Only thing keeping me awake is my pure hatred which i'll try to transfer into this review as best as i can. And where to start really?When an anime such as Manabi Straight is so devoid of..Anything to be honest. Let's get the story part out of the way since there's no story to talk about..It's just another slice of life anime..Cause we needed one in 5 minutes,correct?Well no we didn't need another Moe-SOL anime in our lives but market says otherwise and the rest of us who were not hit in the head as children have to suffer for it...Basically all you need to know about this anime is that it's about a school FULL of girls and more specifically the student council which tries to overcome some problems such as "oh no my nail just broke,what is the society gonna think i won't be able to get married" and "oh my god the festival we planned is gonna get cancelled OMFG i'll die"..I would commit suicide too if those were my only problems in life.. And don't whatever you do be fooled by the description and think of this as an anime where dark themes are explored in any way at all..You might have thought that they would at least explore the reason why kids choose not to go to school or why school is deemed unnecessary or at the very least a mention of the ever decreasing population ..And you'd be wrong,very wrong..In fact this anime is just about cute girls and their cute things.Sure there are times where they try to pull off some dramatic scenes but they are so obviously fake that even a 3yr old would die laughing. And speaking of kids why don't i share some thoughts on the characters? Well there are characters for sure and many of them but who cares?Did the writers care?Not in the least it seems cause apart from Manami the rest of the cast is like watching a dead horse race. I'm prepared to bet you all of my hair that the stuff had a meeting and said "right lads,moe sells..So to prove how idiotic the moe lovers are i have a proposal to make..Let's make only the main character interesting in some way and not bother at all with the rest of them,see how that pans out". And boy did it work cause anyone with working brain cells could plainly see that this cast is a farce.To put it into perspective Manami while offering nothing new in terms of characterisation,is at least a joy to watch and full of energy..In contrast the rest of characters are like they overdosed on these new zombie drugs.In fact if you search the term "generic archetypes" a photo of this cast is gonna show up..Somwhere along the way they did try to breathe some life into them but it was hopeless.The show was already consumed by the moe-fog and as a result you can't connect with them as characters to the point that if someone came into the school and killed them all you wouldn't even notice. So even if it had a story it woudln't have the characters part right. Visually i can't say i'm dissapointed but i'm not over my self with joy either.The character designs consist of a faux chubby loli style which is all the rage in the circles of child molesters in the late years.No facial features whatsoever,with huge eyes and they look like they're a LOT younger than they're supposed to be.The backgrounds and the tone is well done,nothing fancy but they cleverly hid that under tons of vibrant colours..So it's like sleeping with a woman who has tons of make up on and when you wake up next morning you are next to a 40yr old man. This might be the result of the absence of a director.The role of the director was taken upon by a team of creative staff members.Now i can't very well sit here and say the whole thing worked cause yes the visuals were nice-y but again it lacked story. In their defense the last episode was at least a lot better than the rest of the series.So there you go,if you want an anime with fluffy shit all around and a cherry hid in the mountain of shit,go ahead and watch it. Now before you march in with your opinions and whatnot i want you to do an experiment with me..Try and read every review,every comment and try not to find the words cute,moe,romantic or other similar words to describe the show. Manami is at best a generic mediocre borefest..And we had enough of these already,in fact 80% of the shows produced are the exact same copy of each other.So yeah sure they're heartwarming and all that crap but in the end they're not special..In fact they're not even worth of mention. 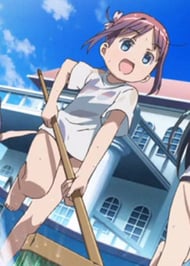 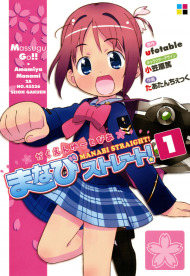