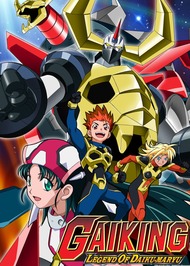 Gaiking is practically “Getter Robo meets Pokemon”. It has all the usual clichés of old mecha series, backed up by really young pilots who have the same irritating ideals as all kids in game/sports anime do. Well, it is expected, since it is a remake of an older series. As a remake, it is funnier, with better graphics and wackier characters. The artwork is nothing much ; some generic alien civilization vs typical modern Japanese civilization, with a few science fiction touches for flavor. The characters look generic as well but their clothes are really cool. And I refer to their civilian clothes since the battle costumes and their robots have an awful motif that really turns you off. The mechas are practically huge skulls with head and limbs. Yuck! True to its origins, the series has many classical special attacks, accompanied by rather well planned battle choreographies. The budget is not helping much though; they are too low-frame and full of jerky movements. Voice acting is bad; everyone talks in a very immature and irritating way. Like in Getter Robo and similar mecha classics, the characters always talk about fighting for justice and love and compassion and righteousness and other kinds of idealistic crap most people have been fed up with after all these years. Like in Pokemon and similar games/sports classics, the characters always aim to get stronger, mature, train, cry, nag and generally act as if there is nothing else in life other than becoming the best in the world or dominating humanity for some immature quirk of theirs. Music themes and sound effects are average; the usual laser and explosion sound effects, accompanied by blood-boiling music themes. The main song irritatingly repeats in all the episodes but never truly succeeds into becoming memorable.The story has a few cute ideas. Do you remember what the villains always were in old mecha series? Either aliens from space or monsters from the center of the Earth. Surprisingly, the villains in the show are both! And as usual, they want to conquer the Earth. And as usual, they are stomped by a powerful mecha. Which is as usually, piloted by teenagers. Which teenagers, as usually, are a bunch of immature brats who always nag and cry. Can the story get more typical than that? Typically, half of every episode is spent at looking the good guys fighting and getting emotional for no good reason, and the bad guys praising their ego and blaming each other. The other half is a battle, usually in the form of an alien attack or ambush and the good guys teaming up, learning something new and defeating the bad guys. There are a few plot twists but are so simple that you don’t really change your opinion of how predictable and linear the story is. You could figure out who the missing father is right away. You could see the bad guys loosing the war right away; by the way they were acting like idiots. You could see the ending forming 5 episodes before the series’ end. There is nothing plausible in here, we must simply accept the fact that only immature kids are the only people capable of piloting huge robots that can save the Earth. The rest of mankind can just take a nap and wait for the results, as the rest of mankind’s weaponry is of course useless against the aliens. There are a few revelations that reason why the bad guys act as such or why the good guys are as they are but it is just mambo jumbo if you think it through. Better than nothing but still nothing great. You can easily replace the characters with those from a thousand other series and you won’t tell the difference. They are THAT generic! -a spunky boy who lost his father and has high ideals and trains to become great, -a gentle seer girl who always prays for the well-being of everyone, -a half-naked butchy girl that always yells and expresses her feelings by beating the guys she cares about, -a gay villain who is more concerned about his mascara rather than winning the war, -an “I’m too cool for school” villain who doesn’t give a damn about anything, -an evil woman who plays it hard to get but gets emotionally frail every 5 minutes,-a haunting black knight villain out to get humanity, -a psychotic girl with God syndrome, and so on, and so on… How many times have we seen those? More than we should! The good guys are your average idealistic too-goody kids and teenagers that spend half the time defending the Earth and the other half bitching at each other with immature, sexually awkward remarks. As expected… The bad guys are your average megalomaniacs who spend their time in selfish remarks and pointless ambushes that never seem to work. As expected… Nobody is fleshed out or has much of a personality. There are no loose ends by the end of the series… Not that there were many. And not that there can’t be a sequel; we watch MORE monsters attacking the Earth and the characters getting ready without a second thought. It is a very mediocre show in all, there is very little reason to rewatch or even keep in your collection. SUGGESTION LIST Tengen Toppa, Gekiganger 3. Wonderful mecha tributes.And now for some excused scorings. ART SECTION: 5/10 Analysis: General Artwork 1/2, Character Figures 1/2, Backgrounds 1/2, Animation 1/2, Visual Effects 1/2 SOUND SECTION: 6/10 Analysis: Voice Acting 2/3, Music Themes 2/4, Sound Effects 2/3 STORY SECTION: 4/10 Analysis: Premise 1/2, Pacing 1/2, Complexity 1/2, Plausibility 0/2, Conclusion 1/2 CHARACTER SECTION: 5/10 Analysis: Presence 1/2, Personality 1/2, Backdrop 1/2, Development 1/2, Catharsis 1/2 VALUE SECTION: 1/10 Analysis: Historical Value 0/3, Rewatchability 0/3, Memorability 1/4 ENJOYMENT SECTION: 1/10 Analysis: Art 0/1, Sound 0/2, Story 1/3, Characters 0/4 VERDICT: 3.5/10 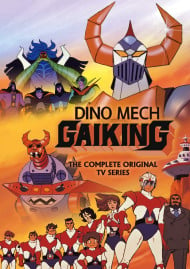