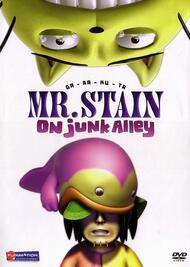 Stain spends his life rifling through the rubbish in Junk Alley hoping to find something good – and preferably edible. Alongside Palvan, his equally hungry feline friend, Stain makes the most of the oddities he discovers amongst the trash. Surrounded by bizarre neighbours such as a masked monkey and crabs who live in traffic cones, and a multitude of treasures waiting to be found, there’s never a dull day for the hapless Stain. From desperately trying to pry open a refrigerator and attempting to eat one of their lizard friends to magic crayons that make whatever you draw materialize in front of you, it seems anything is possible for Stain and Palvan – well, apart from finding a decent, guilt-free meal!

807 users are tracking this. Log in to see stats.

An incredibly mis-understood anime, Mr. Stain on Junk Alley is a hilarious and at times heartbreaking surrealist experience. The plot revolves around Mr. Stain who finds various items in the middle of his alley which, often due to their magical abilities, drive the plot of each episode.  The best way to watch Mr. Stain is to watch it the same way you would normally watch Looney Tunes, but add characters that are genuinely and emotionally affected by the nonsense that happens around them.  Story: The show is episodic but each self-contained story will make an impression, whether you're laughing, horrified or even crying. Yes, crying.  Animation: The animation can be arguably be called it's weakest link. However, I found it to be a fairly charming 3D affair where it's jerky animations only add to it's humour and the simplicity only highlights the horror and sadness that permeate certain episodes. Besides, this isn't Pixar, it's a small passionate team who wanted to make something unique.  Sound: Because the characters don't talk, various vocal sound effects and music cues make up the bulk of what you'll be hearing. It sort of plays like a comedic silent film of yesteryear or Wile E. Coyote and the Roadrunner. The show's ending theme also introduced me to the best J-Pop/Rap hybrid duo ever: Halcali.  Characters: Mr. Stain and Palvan are the best of friends but Palvan (a gigantic cat) has the selfishness and meaness of a kid. Not that Mr. Stain isn't immune to this but throughout the show it often feels as if Mr. Stain acts as an older more mature brother to Palvan. There's love here but doesn't mean it can't be contentious. Kind of like real life bros. While the characters don't really have an arc to speak of (would you still watch Wile if he caught the Roadrunner?) their personalites more than make up for it.  The only reason I think people didn't take to this is 3-fold.  1.) It's not in an 2D anime style. It's more along the lines of the american show Reboot but that only adds to it's charm and nostalgic feel.  2.) They thought it would be a kids show. The show does have it's scary moments. But so does classic Disney films and we're all a bit tougher for it eh? And who says children's entertainment has to coddle?  3.) They thought it would be more along the lines of Popee's mean spirit, Popee the Performer being the more famous production by Ryujii Masuda. Which is fine for Popee but I think the fact the horrors of this world actually affect the characters instead of them just brushing it off makes this a wholly unique experience outside of Popee.  And it's a more nuanced, thoughtful and funnier show because of it.  Ingore the 2/5 score here and give this one a shot. It's fairly short and it's incredibly affecting if you go in with an open mind.

Story: At the start of each episode, Mr. Stain finds some shit in a pile of shit, throwing the same shit out, day in, day out. But the shit he takes out of the shit pile is different every episode. Sometimes it leads to happiness, sometimes to a horrific event that involves a cat named Cat. He wears a sweather made of dyed human skin, but more on him later. Anyway, the moral of the story, as it's a children's show, is that sometimes a good deed will be punished, and the punisher punished. With murder. It's not entirely sensible and each episode is pretty bad on their own but it has it's moments. The episodic plots aren't particularly interesting though, and the final episode is a load of shit and completely bonkers but... no, the entire thing is shit. Animation: I can honestly say this is the best looking of Ryuji Masoda- if he only made more shitty anime- catalogue, which translates to this is the least creepy, nightmare inducing shitfests of his catalogue. I should at least highlight, as the Cat looks fucking scary at times. Fucking psycho and shit with the eye episode. And in general, that steely gaze that pierces your unfortunate soul... soulless and monstrous that only wants to kill... Otherwise, it looks kinda bad, but it is from the creator of Funny Pets, Funny Pets 2: The Murdering, Popee the Performer and the unreleased Inspector Papi, so it's suppose to look like crap. Sound: He's done worse. The EP is shake-yo-ass worthy as everybody shake shakes and the cats pelvic thrust into each other's asses in a homeowrotic conga line. So the music's good and voices only make it worse. Or better, as a silent, murderous cat is fucking creepy. The score is only brought up for the ass grooves and the signal that the episode is nearly over. Characters: In every one of his works, there needs to be a psychopathic non-human, and the cat is that psychopath. Them eyes, filled with greed, murderous intent and cat, so cold and merciless... and he's a jerk too. Kinda like Poopy, but without the guns, knives, sodorapery and being a failure of a clown. There's also the hobo, Mr. Stain, who is the Keda-wolf of the series, except he has better luck, fortune and the eternal bliss of not being in the circus of nightmares. Being the good guy, it's only fair that a bone gets thrown his way, and he's good enough to appreciate it. There really ain't much to them, and a lot of them are on the recieving end of pain, so that's a plus. Overall: It was crap. Boring, but had some moments of entertainment, usually at someone's expense. Overall, it's of the highest calibur in the catalogue of Masuda -May be defile anime forever-, from what I've seen but it can't defeat the meta of Popee the Performer. That shit's legendary.