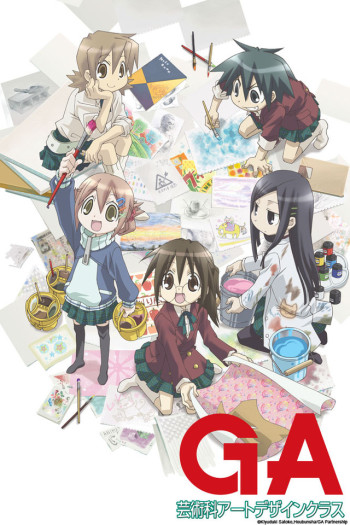 The students of the Geijutsuka Art Design Class study all the various fields of art, from sketching and painting to graphic design and photography. While the mischievous Noda is always thinking up new ways to have fun with her partner in crime - tomboy Tomokane - the ditzy Kisaragi is content with doodling cats in her sketchbook. With Namiko attempting (and failing) to keep the energetic duo in line, the quiet and mysterious Kyoujyu seems happy to observe the odd behavior of her classmates. Whether they are transforming a congealed lump of paint into a sculpture of a pudding, playing ‘color tag’, or making thought collages, the gang live their life to the max through both their friendships and their art.

The Importance of Photography

The Border Between Life and Death

StoryWhat do you get if you cross Lucky Star, with Sketchbook ~Full Colors~ and Hidamari Sketch? Answer: Enough slice-of-life to entertain a small army of otaku for a few hours, and, apparently, GA: Geijutsuka Art Design Class. This latest offering to the gods of plotless slice of life anime follows the day-to-day lives of (surprise, surprise) a group of five schoolgirls. Much like Hidamari Sketch before it, Geijutsuka’s setting is a specialist design school, although, in contrast to its predecessor, this series takes a much more concentrated look at the art world. The series offers an odd combination of educational content and the standard wacky antics of any comedy anime. The show bounces back and forth between somewhat informative subjects like the basics of pictograms, how to improve your photography, and a brief history of surrealism and more inane sketches such as the adventures of the ‘Irodorangers’ – an artistic incarnation of the Power Rangers. As someone who spent four years of her life studying in an art college, the more didactic side of the series amused me. Small details, such as sketching with soft pencils only to find that the side of your hand has gone black, make me smile because it’s something I’ve done a thousand times before and can relate to – and yes, bread can actually be used as a makeshift eraser when drawing with charcoal. Additionally, I want to know where these girls get their putty rubbers from; stuff that stretchy looks far more entertaining than the stiff things I use. Most slice of life series are relatively slow-paced and, when well executed, it can have one of two effects: it will either encourage the viewer to marathon the entire anime in one sitting, or each episode leaves you feeling so distinctly satisfied that you savour it over a longer period of time. Sadly Geijutsuka doesn’t incite either of these reactions. While the lethargic nature of gentle shows such as Strawberry Marshmallow or Sketchbook ~Full Colours~ actually adds to their inherent charm, the madcap Geijutsuka merely feels sluggish by comparison and never manages to draw you into its world. As a result the series doesn’t get the chance to shine as much as it could.AnimationIn keeping with the artistic theme of the series, Geijutsuka occasionally employs some appropriately creative imagery that gives the impression of having been drawn with a crayon or painted with watercolours. This often appears as an abstract background or illustrates a story as told by one of the characters. I find this a nice little touch that adds extra creative flair to the show without being intrusive, garish, or out of place. Aside from that, the series’ character designs and animation are relatively standard, and while they are in proportion to the rest of their bodies, I’m not a fan of the stubby hands that each person seems to possess – how can they draw with fingers that tiny?! Graduated shading also adds a softer quality to the visuals, which nicely accentuates the show’s cheerful atmosphere.SoundGeijutsuka is one of those series that deems it necessary to fill every moment, of its twelve episode run with music. The score of any anime should aim to intensify the mood or set the scene, and not just simply serve as background noise – especially not the kind of racket that is reminiscent of someone repeatedly banging on the keypad of their mobile phone. Unfortunately Geijutsuka opts for the latter producing a cheesy and, at times, unnecessary soundtrack that would be perfectly at home in a Harvest Moon game.CharactersIn any episodic show with zero ongoing narrative, it’s pretty safe to assume that none of the protagonists will develop from their first appearance, and in this respect Geijutsuka doesn’t disappoint. Such is the standard of this genre, each character fills a certain role and never deviates from it. Noda, as the ‘weird one’, instigates most of the fun and wacky events that surround the girls, while her partner-in-crime, Tomokane, steps up as the series’ energetic tomboy. Namiko is the token normal girl who, more often that not, acts as the ‘tsukkomi’ to Noda and Tomokane’s ‘boke’*. Kisaragi takes on the role of the archetypal naïve ditz, complete with massive glasses and kitty fetish, and Kyoujyu fills in as the quiet, mysterious one who never smiles. None of these personality traits are unique by any stretch of the imagination. Sharing practically the same name and a worryingly similar haircut, it’s no surprise that Tomokane feels like a regurgitation of Tomo from Azumanga Daioh, while Noda is very much like the non-otaku version of Konata from Lucky Star. However, in spite of following this familiar recipe, Geijutsuka’s cast is ultimately likeable and entertaining to watch.OverallThe key to fully enjoying Geijutsuka is to have some interest in art and design, since that’s the only unique selling point. While I’ll still happily – and relentlessly – lap up any similar offerings of the sort, the whole cutesy schoolgirl thing has been done to death, though few anime place such intense focus on the world of art as this. Sadly Geijutsuka’s greatest asset is also its biggest weakness and, consequently, it creates a niche market for itself. Anyone with even the faintest curiosity about the creative world may find this series charming; others would probably do best to find another bevy of wide-eyed schoolgirls to satiate their palette. * A popular form of comedy in Japan, called ‘Manzai’, consists of two performers – the ‘tsukkomi’ (straight man) and the ‘boke’ (funny man). The straight man often berates or corrects the funny man’s various misunderstandings and antics.

4. GA: geijutsuka art design class If you have seen my profile recently, like right now, you've probably seen at least one second of it. It's all puni-moe and silly. It's also about art. And design. And most of it takes place in a class. So if you aren't already sitting down, sit down and prepare for another show with a long title Once again we have a show with no plot that just has clips of girls being random (like lucky star) Except where lucky star taught you about the ways of the otaku, GA teaches you art and design, you know, semi useful things. But its not all art humor, they even make a few jabs at fantasy and action shonenes. The characters are slightly more than two dimensional, the shy one, the tomboy, the childish one, the weird one and the normal one. It's a lot like hidamari sketch in the regards of the depth of the characters, except GA is much much faster paced. Among the things you will learn are appropriate coloring, how to take better photos and how to play color tag. Truly life lessons. And maybe if you watch it, you could stop pestering me to draw everything for you. Art in the anime isn't as good as in the manga, they really brighten the tone and tone down the deep shading the very pretty art the manga had. That's not to say it's bad, it just isn't as great as the manga's. The music is fine for this sort of off beat affair, being light and silly like the music from Mario and luigi, only it sounds more military for some reason. Not sure why that is. I haven't seen all of the anime, since ayako sucks, but what I've seen in the manga and the five episodes of the anime I've seen, I love this anime, and cant wait until more of it comes out!

I wasn't ever expecting much from this show and i'm sad that i was correct. Although it did give me false hope that it would actually be good as the first 2 episodes were quite funny. It then turned into the same things over and over again for another 10 episodes. I'm not sure how all these shows can get made let alone be so popular since they are a dime a dozen and you'll be lucky if you find one good one in that group. The chick with the glasses really pissed me off. i'm all for unique character design but when it gets to the annoying part where everytime i saw her i wondered why she had such huge glasses but were never over here eyes. Aside from her the rest were forgetful and meaningless.I suggest not bothering with this show unless... you seem to really like the boring look at a school childs life at art school... :| 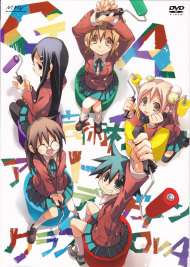 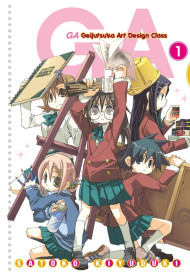