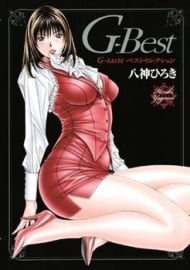 Asuka, Mai, Nana, Riona and Yuki have sexy secrets that they'd like to share. Mai explains the lines and curvatures of the legs when a woman crouches down. Nana works as a maid but believes someone is watching her. Riona becomes excited when she wears the color red, and demonstrates different ways a woman can sit. Yuki wears skimpy outfits for her lover. And finally, Asuka is frequently kept after at the hospital to take part in a sexy roleplay with a female doctor.

Story Plot?  There really isn't any plot in this OVA.  It's bacically made out of several segments, each featuring a different girl.  However, most of these segments can be summed up as "panty shots and erotic poses".  Some spice things up by adding bare boobs to the mix, one segment has implied off-screen sex, two have masterbation, and another features some doctor role-play yuri, but that's pretty much all this OVA has to offer.  If you like this kind of stuff, then you might get some enjoyment from it.  However, if you want some sort of plot to go with the panty shots, erotic poses, boobs, and so forth then you'll be dissapointed. Animation  Some of the girls' proportions can be a bit off at times (with their heads being a little too small and their thighs being a bit too big).  Other than that, the animation is somewhat okay (as in that it's not great, but it's definately not the worst I've seen either). Sound The opening and ending songs are pretty decent, but the background music is forgettable. Characters The girls at least have defined personallties.  Unfortunately, they don't get any development due to both a lack in time and plot. Overall   If you don't like echii, then you should definately stay away from this.  And even if you do like echii, there are far better echii anime out there than this.