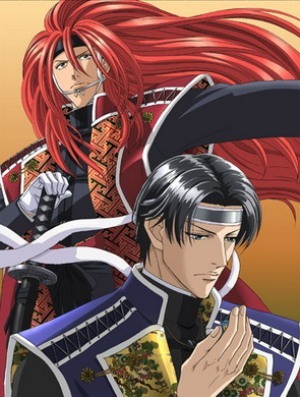 This anime is a typical love story between two characters who can't be together. It is however different to the others that I have seen like this. Partly because it is yaoi and two men which doesn't seem to be explored in this sort of way, and I thought it had a generally more beautiful feel to it.

I watched all three episodes in one go, and they all flowed so well together. It was a bit like a Romeo and Juliet story (one of my favourite Shakespear plays). I loved the historical aspect to the story as well. SPOILERThe ending is so very sad but it was a perfect endingSPOILEREND.

The animation was alright. It wasn't overly special but it wasn't bad either. I thought it worked with the story and I had no complaints about it.

Once again, the sound was alright but nothing special. It seemed to go up and down in volume which is a bit annoying, but that may just have been my computer. The music is beautiful.

Overall, the anime was very beautifully done, and I was very glad I watched it (not an easy show to find though). I thoroughly recommend it to anybody who likes shonen-ai or yaoi, or even anyone who doesn't mind about the yaoi but just likes a good romance or historical drama.

So you see, what happens when you bring the story of Romeo & Juliet to the era of samurais and ronins? Well picture a bit that but with men. Its an excellent drama if you like shounen-ai. A very sad story of a prohibited yet, kind love.

The story has as protagonists two warriors from different clans and social status, that have a dream to finish the war and bringing a new open and peaceful era for Japan. However the issue as always is that their clans aren't very happy with each other.

So it starts as a forbidden friendship that will eventually mature into prohibited love. Meanwhile the war continues and this time no side will stop until the other one is crushed.

Even if predictable, the story goes through various moments when you don't know if their honor and pride is more an obstacle for their relationship that even the war. The sadness lurks in every moment and the hope that at least they can be happy in the end.

If you don't want a sad story, don't watch this. It's like a Japanese yaoi version of Romeo and Juliet.....only I don't remember the ending to Romeo and Juliet being that depressing!

Overall, this is a really good anime with a great story. It almost fits more in the shounen-ai genre than yaoi, but there is some sex. Like many animes set in the same time period, it's very informative and focuses on the setting, what was going on in Japan at the time and the important historical events, as well as the story, which in this case, was the love between two men on oposite sides of the war.

The theme of forbidden love is pretty common in yaoi since, well, it's guy on guy and that isn't always accepted by most of society although it is become less tabboo. However, this story almost completely ignores that part. Instead, the theme of forbidden love exists because one is from the Choshu clan and the other is part of the Bakafu army which were fighting during this time period. In fact, the other characters don't even seem to care at all about the gender. I don't think they really know what the relationship is but maybe they do. Anyway, I thought it was a nice change.

In three episodes, it's hard to develop the characters a whole lot. However, the characters were well developed for just three episodes and they changed a bit throughout. The story develops at a nice pace and kept me interested the whole time. It focuses more on the story than the sex and stuff which is fine. I like that it treats it more like it's no different than a guy and girl. If you like guys together and Japanese history or at least this particular time period, you really need to watch this. I enjoyed it even though the end had me trembling and made my heart feel like it was being torn apart.

Now I am going to have to find something light hearted to watch before I go to bed...I guess I won't be sleeping till 5 a.m...... DAMN YOU FUYU NO SEMI FOR BEING SO SAD! I don't like sad things right before going to sleep! Not that anyone reading this review cares about my sleep. Seriously though, this is like the saddest yaoi I have ever watched.

The sound quality and animation quality are pretty good. It's definitely worth watching!

I felt as if this anime was barely a yaoi and it was just a history lesson. I don't care to learn about Japan's history, I want to see guy on guy. I was very confused throughtout the entire thing, and I got bored pretty fast. It was good, and I liked the romantic levels but it was more focused on what happened with Japan and England and all that in a whole than the couple.

Alright,to be honest, I cried. I cried a lot while watching Fuyu no Semi.

The plot itself was really beatiful to begin with.Of course,there are probably thousands of kinda similiar stories,but still, I think this one is unique in it's own way. It's about love between two men who are just not able to be together. They try,try as hard as they can. But there are things we can't change.They couldn't change it either. I liked the story,it was fresh,dramatic and so on,I just liked it.Even though there was a war I liked it.You are dragged into it really fast(not the first scenes though) It was really romantic too,but they spoiled all the most romantic scenes with sex.Really,all of them,except the last one.It's not like I don't watch yaoi,but they just put it in wrong moment,that's all.Other than that,the story was..what I wanted it to be.

If it wasn't from 2007, I would say the animation it's old style,but...well, I think animation IS nice,and really suit the story,it just doesn't look so new to me. But that's my opinion. There are lot's of details and backgrounds are sometimes really beatiful,sometimes average.I think it's perfect animation for shonen-ai of this kind.

Well,hard to say, I didn't quite catch the sound,except ending,which was beatiful. But nothing else,I just don't remember it,but that doesn't mean it was bad,because if it would have been bad, I would know :D

I think characters are well made and they develop during the story a lot. But you won't probably notice that change untill they do something to make it clear. They could be typical,but I didn't see them like that. I saw just human personalities living through  the whole story. They were what I expected them to be,and I liked it.Though it's short,you will grow to love the main characters, You will be happy and touched when they are,and you will cry when you see their tears. I did :D