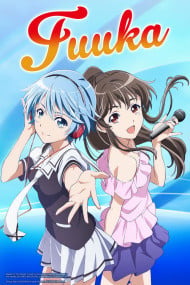 Notice: this review contains all episodes so SPOILER ALERT, but i'll try to keep it as little as possible, I'm saying this to state what I want to pin point ..oh boy...this was....idk I guess I'll just state how I feel and don't worry I'll keep it short as possible.  I decided to watch this anime since I thought hey this is something that is similar to beck the only similarity is they have is the band so I'll start but let's go with the positives for now and i'll make a list out of it.  and also...This is an ANImE REVIEW so I'll be comparing this to the manga because of the DIFFERENT STORY LINE POSITIVES 1. KOYUKI...my dear girl, the only reason why I kept watching fuuka, she's the best character, and heck she did all the things that she had to do (not in a yandere way of course) just for yuu, she even stated that she dedicated her SONGS almost all to him, and true she made a mistake which is normal in an anime but she tried to make up for it, and I like that she even support Fuuka at all costs even if it's because of her feelings for Yuu 2. Of Course the Art and the Music, personally I think It's not that Bad, I like Climbers High Fair wind, probably because It's my genre, since I like Rock, and I like the designs as well, especially Koyuki Sarah and Kazuya. 3. Though I still personally think they suck, I sort of like the personality of the band members but that's just about it.  BUT NOW LET'S MOVE INTO THE NEGATIVES...Dum dum dum... 1. THE ENTIRE STORY LINE SUCKS AND DRAMA WAS F****N FORCED I'll explain why Epsiodes  1-4: Formation of the Band  5-9: Koyuki's past and relationship with Yuu 10-12: Fuuk's feelings, leaving the band then going back again. The Sad Part is most of the episodes revolves around Koyuki, and her feelings for yuu was explained well, heck I even liked Yuu when he started going out with her, then i thought "Hey this Anime route is not so bad" but no out of nowhere Fuuka relaizes her love and leaves the band, then episode 11 (sorry I can't take it) yuu realizes he loves fuuka then brakes up with koyuki in less than 10 F*****N MINUTES, the the second hald talks about the SO CALLED STUGGLES OF THE BAND which i Think is not touching enough, then of course the final epsidoe where everyone is happy blah blah blah and of course yuu and fuuka lived happily ever after The point is I don't mind cliches, but If you're planning to end up with fuuka then HELL THEY SHOULD JUST FOCUS MOST OF THE EPSIODES ON HER RELATIONSHIP WITH YUU DAMN IT, what's the point of all those build up with Koyuki if in less than 10 minutes it'll be thrown away like an old PS2 also the suffering of the band is forced. you see series like Beck Love Live and Sound Euphonium, you can see the growth of the band or group from their humble beginings and stuggles, while here all you see is a bit of flashback of waht the bandmates did and before the episdoe ends they went back together...LIKE MAGIC 2. The Fuuka in the manga is diffrent she's a lovable character there, unlike here in the anime. 3. The Side characters (bandmates) pretty much suck, they got likable perosnalities but that's just it, let me mention. First Mikasa, what separeated him from teh two is that he knew fuuka for a long time and he's also gay, but the point is if he knows fuuka, are they really that close?????? I can't remember a time when he went to fuuka's place and worse he can't even tell if Fuuka's sad or something,  Then We got Kazuya whom I like I mean going tusdere mood on his grandma is pretty cute and for Sara to have a nice body..but that's it 4. Truck-kun has Failed. 5. I'm annoyed at teh fact that WHAT FUUKA WANTS FUUKA GETS..I mean just think..she wants a band she gets it, she likes yuu and Yuu falls for him, and she does acutally nothing on it, while Koyuki has only 1 goal and that is for yuu to love her, and for her to work her ass of day and night for her to build up the courage to confess to him and getting dumped in less than 10 minutes....that's gotta hurt. 6. Yuu came from an interesting male lead to a generic mc, that so called developemnt that he has, yeah a lot of MC does that too(excpet for Ichika I guess) and yes is is a Horrible MC, heck I just wanna RKO him and If stone cold is in the anime he would have stunnered him and say "YU HARUHA 3:16 SAYS I JUST DUMPED THE BEST GIRL IN THE SERIES!!!!" before giving him a beer bath along with Fuuka here's the thing I have no problem regarding generic characters but damn this guy just don't have the balls to say his true feelings I mean dude "DO NOT DATE SOMEONE THAT DO NOT LOVE!!!" he dated Koyuki and broke with her in less than 10 FREAKIN MINUTES FOR LOGICAL REASONS and just went back with Fuuka out of Nowhere. and don't give that yuu fuuka moments on the first couple of episodes they we'rent romantic and they seem to be on friendly terms that time, what's worse he can't explain things properly overall I gave this a 5 since despite being predictable, I like the music the art and Koyuki..hope you won't get offended this is just perosnal thoughts.

I dont like it but weirdly i finished this series. The problem is on the story. Hm what can i say.. too easy? Too cheesy?? It makes me kept saying "what is this plot? why she's so sentimental? Why everyone always got jealous and easily fall into misunderstandings? Can they calm down for a lil bit? Too sensitive, too childish" etc. Also the character is a mess. For Yuu, i like his character development in the last few episodes. But for others, especially Fuuka and Koyuki, i dont see any character development on them, especially Fuuka, i really dont like her character. It's a meh for mc. Really, i hate her. I admit that the animation was good, but they didn't put the details on the band members playing instruments. The sound is not bad too. If only they had a better story. I was so disappointed.

I like the main concept of the story. But i felt that the anime truly lacks in its common sense. There were many illogical scenes that just purely does not make any sense. The feelings and emotions that most of the character shows are too dispassionate and could be called absurd. The elements of the story have so much potential, but the plot for now is just too dissapointing.  The other features of the anime are okay-ish i guess. Plot is everything for me. Cant enjoy a crappy anime with trashy story. 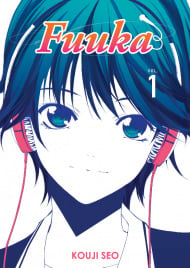 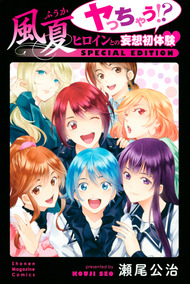