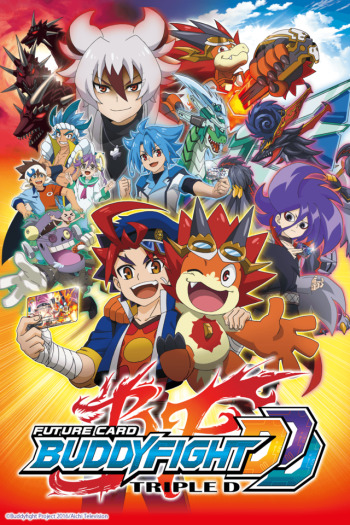 If you're looking for anime similar to Future Card Buddyfight Triple D, you might like these titles.

Dan Kuso's life changed one day when cards fell out of the sky and grabbed one, which he and his friend Shun used to invent a game called Bakugan. With other friends, they form a group called the Bakugan Battle Brawlers, and then are accidentally dragged into fighting for the fate of Vestroia (the Bakugan's home dimension).

Vestroia loses its natural balance and merges with the Earth and many other worlds. An evil Bakugan called Naga was tempted to take the power of the Infinity and Silent Cores, which formed the Perfect Core that balanced Vestroia, but absorbed too much negative energy and thus was trapped within the Silent Core and destabilised Vestroia. So Dan and the brawlers decided to bring back balance by meeting new friends and allies in the other worlds, learn more about the origin of the Bakugan; and facing Naga, a rogue bakugan who seeks the mighty Infinity Core so that he could complete the all-powerful Perfect Core and have almighty power and absolute control over Earth and Vestroia.

In a world where creatures known as Pokemon roam and would-be trainers capture and battle the beasts, the young Ash Ketchum can’t be happier; he has finally reached the age when he can have his very first Pokemon! Along with the electrical Pikachu and human buddies Brock and Misty, Ash must embark on a journey to battle countless others and become the best Pokemon Trainer of them all! From the Johto region to the Orange Islands, there’s plenty of Pokemon to catch and adventures to find, even if the infamous Team Rocket stands in the way!

The franchise began as Pokémon Red and Green (released outside of Japan as Pokémon Red and Blue), a pair of video games for the original Game Boy that were developed by Game Freak and published by Nintendo in February 1996. Pokémon has since gone on to become the highest-grossing media franchise of all time,[9][10][11] with over $70 billion in revenue up until March 2017. The original video game series is the second best-selling video game franchise (behind Nintendo's Mario franchise)[16] with more than 300 million copies sold[12] and over 800 million mobile downloads.[17] In addition, the Pokémon franchise includes the world's top-selling toy brand,[18] the top-selling trading card game[19] with over 25.7 billion cards sold,[12] an anime television series that has become the most successful video game adaptation[20] with over 20 seasons and 1,000 episodes in 124 countries,[12] as well as an anime film series, a live-action film, books, manga comics, music, and merchandise. The franchise is also represented in other Nintendo media, such as the Super Smash Bros. series.

In November 2005, 4Kids Entertainment, which had managed the non-game related licensing of Pokémon, announced that it had agreed not to renew the Pokémon representation agreement. The Pokémon Company International oversees all Pokémon licensing outside Asia.[21] The franchise celebrated its tenth anniversary in 2006.[22] In 2016, The Pokémon Company celebrated Pokémon's 20th anniversary by airing an ad during Super Bowl 50 in January, issuing re-releases of Pokémon Red and Blue and the 1998 Game Boy game Pokémon Yellow as downloads for the Nintendo 3DS in February, and redesigning the way the games are played.[23][24] The mobile augmented reality game Pokémon Go was released in July.[25] The latest games in the main series, Pokémon: Let's Go, Pikachu! and Let's Go, Eevee!, were released worldwide on the Nintendo Switch on November 16, 2018. The first live action film in the franchise Pokémon: Detective Pikachu, based on Detective Pikachu, began production in January 2018[26] and is set to release in 2019.[9]