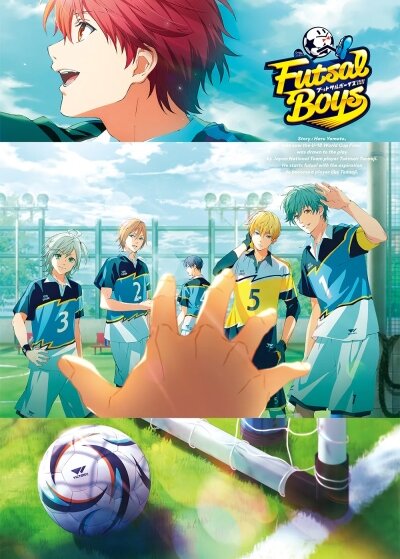 Haruma Riku begins high school with no future in sight. Then, in a passing glance, his attention is captured by the wild, animal-like movements of a student on the school's athletic field. He jumps higher, runs faster, and tries harder than anyone Riku has ever seen. That student is Kariya Akira, and the sport he plays is the one Riku attempted in the past but gave up: rugby. As he watches Akira running in a rough, unrefined gait, Riku gives him a bit of advice without thinking, and those words end up setting his passion for rugby alight again. With this first encounter between these two young men, one tactical and the other physical, a new light begins to shine on Riku's future.

Two sports teams rebuilding their squads with new-comers and old veterans.  While the anime technique shines for Futsal Boys! you have to like the range of characters who make up the rugby and arena soccer clubs featured.

Basically Futsal is a Football version of Haikyuu.Both have :

The story of a high school ekiden (long-distance road relay running) club and its efforts to prepare for the ward tournament. Since the story takes place in Kariya, viewers will get an idea of the city through the backgrounds.