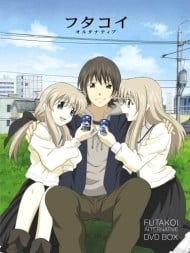 Rentarou has been running the Futaba Detective Agency with the help of his twin assistants Sara and Soujyu since the previous man in charge, his father, died. To top it off most people in the neighborhood refer to him as Nidaime, a second generation man who lives in his father's shadow. His late father was a great man that was looked up to by everyone good or bad including Rentarou. With problems from his father's legacy presenting themselves, Yakuza that sometimes want him dead, a workplace/home that keeps getting destroyed and Sara and Soujyu's growing feelings for him, will he ever live up to his father?

If there’s one thing I can credit Futakoi Alternative for, it’s for consistently surprising me; the show changes gears so rapidly throughout the 13 episodes that it’s basically impossible to predict what will happen next. Just when you think the show is running along the lines of some GAINAX tripfest, the series will abruptly switch to slice-of-life. The creators will wait a few episodes for you to get used to that, and then swerve violently into the angsty romance genre. Then, just as you think that the show is going to consistently do the opposite of what you’re expecting, the anime will follow formula to a “T” and shit out a hackneyed hot-springs episode… just to prove you wrong! I can’t think of any show more wildly schizophrenic; even FLCL had the decency to be dependably bizarre. The show feels almost like a game that my brother and I play when we’re watching something especially lame and predictable. At random moments, one of us will spout out something absolutely random that completely breaks the mood of the show. For instance, our hero could be in the midst of confessing his love to some particularly buxom bride- to-be, and I’d scream out, “EAT HIS FACE!” Imagine this, except replace me with some totally messed up Japanese dude who happens to have suffered through the original Futakoi series in its entirety. You can imagine where this is going. “Instead of some boring plot where a heroine loses her memory, let’s have a giant squid attack the city! This romantic comedy needs more neo-Nazis! Why doesn’t this show have more FIRE?” and so on and so forth. However, the real question is whether the series is actually entertaining. Honestly, I’m not so sure. The director goes in too many directions at once, and there’s a limit as to how seriously I can take some cheesy romance scene when I know that weird wacky comedy will be coming 20 seconds later. Also, the show is actually fairly boring at times, despite the rapid changes in pace. Particularly in episodes 3-7, where the anime is slowly developing the setting, there are many dull and uninteresting moments. That said, there were several moments when I laughed out loud, and several others when I was actively interested in what would happen next. While certainly not perfect, it’s hard to deny the stubbornness with which the creators tried to do something different.

It was fun for most part, though the angst part was not. The way the angst part got resolved seemed cheap. The craziness reminded me a lot of FLCL. Anyone else noticed NGE reference in the last episode? There was plenty more references through the series, but somehow I already forgot most of them. It seems my review this time does not have a proper form, let me fix that a bit (though I can't guarantee it's not going to be vague). Story: Romance story between a guy in his twenties and teenage twin girls. This one takes a strange turn, because there isn't any angst on the guy's part nor the girls' part caused by the fact that there is 3 of them. They seem to be perfectly fine with being in this love triangle. I kind of like when the characters in romance series simply enjoy spending time together with their loved ones and this series actually delivered a bit of that. Nonetheless there was some angst in the series somewhere towards the end and it wasn't all that great. Did I mention that storytelling and comedy was totally crazy? No? Well, it is. Think the likes of FLCL. The series ends with a status quo, but it's different here from many other series. In romance series and many harem ones, status quo endings mean that characters' relationships haven't got anywhere. However if those relationships got somewhere before the series ended and that series has a status quo ending can be actually good in it's own right. I mean if characters reached a happy conclusion halfway through the series, status quo ending means it's just going to continue. Animation: Nothing mind blowing here. I'd say it was ok, but the design of many female leads was so-so and had that galge feel to it. Sound: Voice acting was ok, but the BGMs were really good (at least most of them). Characters: Aside from Rentarou and the twins no other character had any big role, so everything just revolved around the main triangle. Those three were pretty fun to watch. Rentarou is an improvement over many shounen and even senien male leads, though my opinion of him went a little bit down during the angst part of the series (he spent a whole episode thinking of "what if"s and feeling down instead of doing everything he can to stay together with his loved ones and there was also the fact that he was too willing to let go of them). When I was watching the series I though the twins were ok, but now, shortly after finishing it, I can't really say much about them (seems they're not all that memorable characters). Overall: The first part of the series deserves an 8, but due to the later angst part I had to lower it to 7 (the ending was still good though). So, was it worth watching? It sure was. Sorry if my review isn't very coherent, I guess I'm too sleepy right now to write it properly. 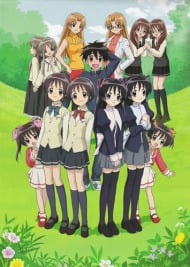 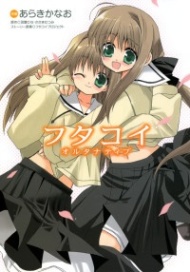