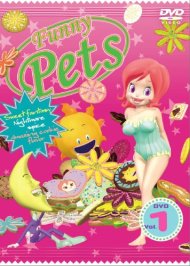 A sun, a moon, and a girl; what sounds like a bizarre astronomy experiment is actually a group of friends in a lush and colorful fantasy world! With pesky rodents in the garden and fun times to be had, there’s never a dull moment for the Funny Pets and their master. From taking a ride in a convertible to games with cabbage, there’s nothing the Funny Pets will stop at to have a good time, even if it means embarrassing themselves in the process! Join the extra terrestrial pals and their human cohort as they tackle life one fun day at a time.

Disclaimer: Swearing aplenty but completely warranted for the Moon alone. And I've learned that the harlot's name is Funny. Yeah.... She's still a ho. Story: At the start of every god-forsaken episode, the Sun and Moon crash land on some planet and move in with a whore. It's shown after a creepy full moon opens it's mouth and spaceships pour out. The Moon, probably the driver is most-likely high or drunk or both and gets them both stranded. Basically it's nonsense, hardly important. Apart from that, you have wacky adventures of the trio doing stupid crap, with the Sun and Whore doing some shit and the Moon wanting in but can't because he's a creepy fuck. Otherwise, he's doing all the work or getting some pain for his malicious intentions and because of what he is. It's god-awful crap most of the time and a complete acid trip once or twice. The Rainbow episode (7), that was some faulty crack. To be fair, it's morbid, vaguely sexual crap. This isn't meant for children, not just the serial murderer Moon or the whore who had the bottle one time. There's completely warranted death, abuse, violence, murder, willful murder, arson, thievery, something about ripping into the flesh of a baby thing, the Moon, polluting the world without burying the dead, spontaneous combustion and some deeply twisted attempts at humor. Have to give it a one for the rainbow and the Moon getting roasted by his own arson work. He had it coming. And where he dies 20 seconds in; best intro in the series but got creepier. Animation: It looks like shit. ReBoot in it's first season pulls CGI better and it was made in the 90s and the first fully CGI show. It's not just that everything looks like shit, but the wacked out physics. Arrows, the UFO bouncing around like a tennis ball, everything. This was made on a budget on the cheap, they probably didn't even pay the animators anything more than a can of peanuts. Another one for the rainbow, which turns out to be even trippier than I expected. Sound: Good god.... getting this out of the way, the voices. Nobody can even pronounce the simpliest of words and just get by with grunts, giggles, looks of pity, some kind of horndog laugh or playboy laugh; it's just awful. And the music is noticable for being utter shit. The OP, the EP, everything. Nothing redeemable here. Characters: The Moon, first off, is one of the creepiest bastards I've ever seen in my life. The guy always has a psychotic look and looks like he wants to kill someone or get into the ho's pants corset. With his laser gun he shoots at will, nothing is safe from his homicidal tendancies and violence. He is also mentally deficient but the smartest of the trio. Don't look directly at him. Then we have the Sun, who is as dumb as they come with a black hole in his mouth. Also cries a lot and a fortunate victim of the Moon and his crimes. He had it coming. Third and certainly least in the brain compartment is the whore, who dresses in a corset every day and who could give less than a crap about the Moon (Her one... non-shortfall). It's borderline obscene how much she appears to hate the bastard or not care about him but it's completely warranted. Have to give some props to the gophers, who don't take crap from the Moon and are the best of the bunch, with the manly dad in the Three Matches episode. The only reason it's a one and not lower is because they made the Moon the creepiest fuck alive. Sothis is right on the nose with that creep. Overall: I have to compare it to my next hated anime and think, "Is this shit worse than that shit"? The short answer is yes and I can't demean that shit by putting this shit on the same level. And because I can't mention it enough: That moon is one creepy motherfucker.

Is your brain in desperate need of a lobectomy? Are your dreams far too peaceful and devoid of creepiness? Do you hate yourself and our depressing world? WAS POPEE THE PERFORMER TOO NORMAL FOR YOU?! If you've answered yes to all of these questions, you've come to the right place! Look no further, dear psychopath friend, because from the twisted, twisted mind of Ryuji Masuda comes Funny Pets! The story involves two creepers abominations ALIENS, shaped like the moon and the sun, who crash their UFO here on Earth (presumably somewhere in Australia... Not joking) and become the pets of a bimbo girl named Funny. That's where their fun and educational adventures begin! And by 'fun and educational' I mean 'sick, deranged and horrifying'. Most of the 6 minute long episodes involve Crescent, the moon guy, being ignored or mistreated by Funny, who obviously loves Corona, the sun guy (or girl? I have no idea), more than him. Then he tries everything he can to gain her love. The result is 90% nightmare-inducing and 10% idiotic. The first couple of episodes at least try to pretend that they have a charming story to tell, but it all goes downhill from there. Episode 7 scared the shit out of me. DON'T WATCH IT. Animation and sound... Well there's not really much to say, except that it feels like your eyes and ears are being stabbed by rusty butter knives. Repeatedly. While your face is being set on fire. Now for the characters. First of all you have the two titular pets, Crescent and Corona. Both of them are disturbing and idiotic - the former moreso than the latter - and very, very creepy. Especially Crescent, who laughs like... Well, there are no words to describe his laugh, but trust me when I say that you don't want to hear it. Corona is a bit more likeable, as he is less likely to do crazy stuff. And to complete the trio, we have Funny, the dumbest person - in fiction and in real life - to have ever graced the world with her presence. I cannot even begin to describe what kind of brainless idiot she is. Everytime she came on screen I had to protect my forehead from all the facepalming that would ensue. There are also some gopher-like animals, with ridiculous, dong-shaped noses, who kind of serve as antagonists I think? Anyway, they're the reason Crescent suffers, so all's well. Funny Pets does have its normal, or rather not-too-disturbing, moments. Most of the time that's followed by an episode even more WTF than you've seen already. So, if you're ready to say goodbye to some of those precious braincells of yours, go watch it. Oh, and if your brain hasn't been violated enough afterwards, there's a second season. Mankind is doomed. 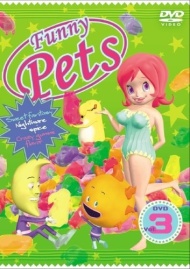