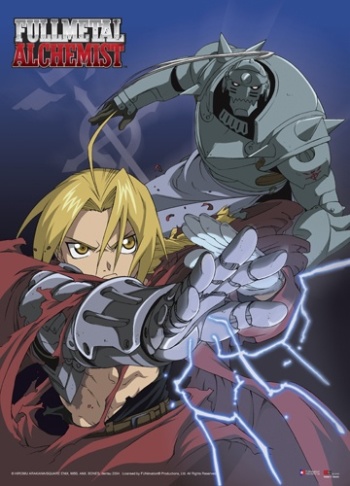 This was made to be watched after the anime, but before the final movie.

Sadly, I couldn't find a sub version of it where the sound didn't become messed up a little after halfway through, and the sound grew more and more off from the animation the further  into the special I got, which made it a little harder to enjoy, but it was still one of the best recaps that I've ever seen.

Don't watch this unless you have watched the whole show, as, while it misses some things I felt were important and glosses over others, it covers the anime from start to end. I think that the main focus was on Ed and Al, and why they did what they did, rather than on just summarizing the entire anime.

There is a little bit on the Homunculi and Roy Mustang, but the biggest focus was on the two boys, their past, and what happened to them at the end of the anime--leading in perfectly for the movie.

Seeing everything about those boys in a little under an hour and watching them as they lose so much in so short of a time... I've seen the entire anime twice (just finished it for the second time two days ago), but it still made me about cry.