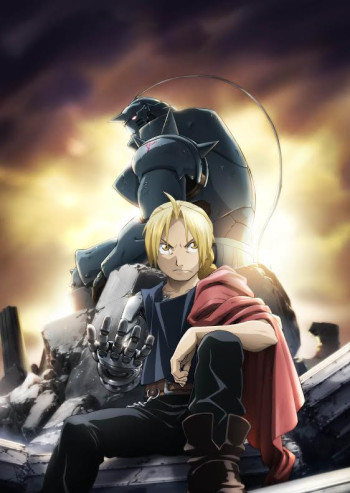 This one was a little creepy. I'm not going to spoil the ending, but for a short little piece, it was put together pretty well, and the mystery of what is going on keeps it from growing boring. It's a little slow, I think, but not boring.

This one is all about Winry's and Ed's relationship with each other, through the years, and explains how Winry got the jewelry she did, in a pretty funny manner. There's also a little bit of Riza in there, and I think her bits were weaved in pretty well.

Here we get to see Izumi's adventures in the North, when she lived for a month without her alchemy. It was a fun little thing to watch, and to learn more of what Izumi was like when she was younger.

Roy Mustang's and Hughes' past? Yes, please! This is easily my favorite of the four, and I like how it falls right after Izumi's episode. Both Roy and Izumi were eighteen, in their specials, so it's interesting to compare how different their lives are, when they're both alchemists. I also love the political issues brought into this episode, and my respect for Mustang grew with how he handled it.

Overall, I really liked these specials. The first was just a random story pulled together, but the last three all deal with backstory type of stuff for the main characters we know and love. I feel like the last episode was the most complex of the four--and that's not just because it had my favorite characters--but they were all pretty good.

The best is the story number 4 about Mustang!!!