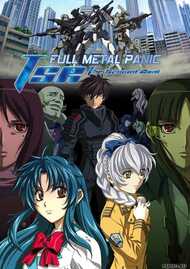 Half a year has passed since Sousuke Sagara took up the job of protecting Kaname Chidori and has started living like a normal teenager for the first time. A former child soldier, his view on the perils of everyday life is highly unconventional and in frequent need of violent adjustment; Kaname can only hope her endless assault will eventually get him used to normal life. But a shadow looms over their happy days as Sousuke's employer, the private army called Mithril, is attacked by a new unknown enemy. Suddenly outgunned, can Mithril afford to keep one of their best playing around?

The End of Day by Day

The Scene Below the Water

Labyrinth and the Dragon

StoryThe third addition to the Full Metal Panic (FMP) series - The Second Raid (TSR) focuses on the increasingly complicated life of Sousuke Sagara, our 17-year-old professional soldier who is employed by the anti-terror organization Mithril. For starters, Sousuke must continue his job as the undercover bodyguard of Kaname Chidori, while somehow mastering the unreliable Lambda Drive within the Arbalest proto-type (think mecca unit) so he can continue to do battle with rogue terrorist organizations; all while at Mithril's beck and call! Of course, TSR wouldn’t be complete without creating a secondary love interest for Sousuke in the very cute form of Tessa Testarossa, the 16-year-old captain of Mithril's technological marvel of a submarine upon which Sousuke is assigned. The story itself revolves around the ever-changing political landscape of a futuristic Earth, where behind every news-worthy event lies at least one covert terrorist or anti-terrorist organization. In essence, the heart of TSR is about how these covert organizations struggle for power to either maintain the current political balance or to de-stabilize things in their favor. Add to this the evolving personal dynamics between Sousuke, Chidori, and Tessa, all of which is constantly muddled due to the title each character holds (ie Tessa is Sousuke’s boss and Chidori is his assignment). As a result, what you have is an extremely complex plot that is totally worth your time, but in order to really get what’s going on you should start from the beginning with the first season of FMP. AnimationUnlike like a lot of American animated pieces, TSR really does a nice job of blending CGI scenes within the course of the piece in such a way that they don't stand out like a sore thumb. Beyond that, the colors are vibrant and the imagery was extremely realistic as evident to the high attention to detail paid to in the shots of the Hong Kong skyline. On a whole, FMP TSR is truly one of the better animated pieces I've seen, and would highly recommend it based on production value alone.SoundLike other aspects of this anime the soundtrack does a great job of reinforcing the mood of the series. The opening theme is a very up-beat and establishes the inherent optimism that's found within the series. The closing theme is a much slower and reflective piece that describes the bond that forms between Sousuke and Chidori. Beyond that the soundtrack is quite lively and appropriately sets the mood throughout the series, as well as provides all the necessary background sounds that makes the user feel that they're right in the middle of the war zone.CharactersSimilar to the previous FMP series, the three key characters here are Sousuke Sagara, Kaname Chidori, and Tessa Testarossa; and like the previous series, TSR continues to evolve and define their relationships. However, the one over-arching constant in this series is that the characters must mature as individuals in order for their relationships to survive. As a result, all of the characters are isolated and then placed in very difficult situations that they must each see their way through. It is worth mentioning, however, that unlike other series which rely strictly on circumstances to drive character development, TSR actually relies on a whole host of secondary characters -- some of whom are re-introduced from the first series. As a result, I would not recommend watching TSR without first seeing FMP â€“ though it should be noted that FUMOFFU doesn't really play much into the plotline of this series except for one or two recounted memories that Chidori shares. OverallTSR is really a great series because unlike a lot of other anime, this series is not simply about evolving the character. It instead focuses on Sousuke, Kaname, and Tessa actually growing up and learning to make decisions for themselves. In that way, the series does a great job of conveying the message that teenagers are still teenagers no matter what they do or how talented they are. And in the end, maturity only comes from stepping up and making decisions while being fully aware of the consequences involved. All of these things are wrapped up in a complicated storyline that both introduces new characters and gracefully re-introduces old ones from the first series. In short, TSR was a series I had to finish once I started and it did not disappoint. It's a must watch for any fans of the FMP series as it does a great job of extending the story and continues to evolve the characters, while still delivering the usual hi-jinx and FMP humor.

Full Metal Panic: The Second Raid came to me at a time when my love for anime was suffering a most unnatural downturn. I thought its predecessor FMP generic and overhyped and thus harboured low expectations when embarking upon this show. The FMP franchise is beset with chronic disjointedness – while FMP delivers a standardised mecha plot involving various criminals, the side story Fumoffu is a highly successful spastic comedy. TSR, again, is a very different kettle of fish in that it adopts a more brutal narrative style that allows the characters to strut their serious side. I also think it’s a remarkable leap up from its predecessor, FMP.Its thirteen wonderful instalments includes an ever-delightful mosaic of comedic farce, intense military action and touching personal drama. And all of this peppered with characters that have magically come alive since the first season. Sousuke matures convincingly through gripping personal dilemmas, Kaname takes a backseat (thank God), and the antagonists have a lot more entertaining personalities and convincing back story. Additionally, the animation rocks in every way that matters, delivering gripping, thrilling, eye-popping battles.A powerful addition to the FMP franchise, TSR also reinvigorated my sense of fun for the art as a whole. Let it do the same for you.

As Yahtzee Croshaw once said, "A good sequel is one that uses the original as a jumping-off point for a brand new story, while a bad sequel simply wallows in the original like a hippo in a vat of liquidized children". Seeing as how the original Full Metal Panic was fairly mediocre, with only a particularly impressive antagonist pulling it through its inconsistency, poor characterization and bad pacing, it would have been very regrettable if The Second Raid had simply taken the latter route and rehashed the first series in an inferior format. So what a shock we're in for, as Full Metal Panic: TSR is by far superior to its predecessor in almost every way. Part of what helps is Full Metal Panic: Fumoffu. One of the major problems the first series had was that it kept swinging between generic highschool comedy and military action, and made no real attempt to weave it together. Overall, it would have been better if they had been two shorter series as opposed to one 24-episode one. And that is exactly what they did here. Whilst Fumoffu went about doing the highschool comedy much better than the original did, TSR does the exact same thing for the military action. Whilst TSR does have some comedy here and there, this time around it feels necessary, and gets woven into the story, rather than being some pointless distraction from the plot. Whilst the plot does take a handful of episodes to properly kick in, it follows as such: Mithril discovers that another organisation creating chaos has similar technology to their Lambda Driver, a one-of-a-kind device that only the protagonist has the ability to use... and doesn't seem to be able to anymore. Also, rogue members of the aforementioned organisation are starting chaos in the unstable Chinese government, for an unknown "Sensei" of theirs. All through this, Sosuke is being put through the serious strain of protecting the "Whispered" Kaname Chidori, whilst maintaining his highschool façade, and undertaking his regular military missions. Through this, our previously annoying, personality-devoid protagonist is put between a rock and a hard place, gets forced to genuinely come into his own as a character, and rebel... and this is where the series shines. Whilst in the first season, the characters were bland, annoying, and totally devoid of development, with Sosuke being the worst, here Sosuke manages to get some extremely impressive character development turning him from perhaps the worst to the best character over the course of only a few episodes. They also manage to replace antagonist Gauron with another fantastically psychotic antagonist, Gates. Whilst Gauron was more entertainingly evil, and outright disturbed, Gates' outright psychopathy is actually played more for laughs, e.g. having his crew kill off his attackers, and then suddenly remembering he needed to extract information from them first. They play his brand of hilarious gore so well that there's never a dull moment with him on screen. This is all somewhat underplayed by the fact that Gates isn't actually that important to the plot, though. Whilst an antagonistic force is clearly in effect, Gates never really seems to effect the plot as a character, as though his personality and plot significance are two separate beings entirely. In fact, if i'm not mistaken, I don't think Gates ever speaks to a single one of the protagonists once in the entire course of the series. And whilst we're speaking of antagonists, Gauron's motivations are finally explained here. Whilst they made little sense in the first series, they finally have some light shed on them, although they are rumouredly more fleshed out in the manga. With this given, alongside the two remaining annoying characters Kurz and Melissa being largely absent, the only truly annoying character remaining is Kaname Chidori, who manages to fall easily into the "helpless maiden" archetype, going through every "Dead Teenager" horror movie cliché in one particular episode. Sadly, unlike the first series, this episode cuts in at only 13 episodes, being one of those series that really leaves you wanting more. In fact, it almost feels rushed, and in some ways feels like a clichéd attempt to pull things together. To its credit, though, it manages to tie up all but a few unimportant plot threads this time... and those look as though they'll be tied up in another series anyway. We can only hope, because with this and Fumoffu under FMP's belt, it's definitely worth watching the first series just to get to this. Final Words: Frankly, one of the best anime sequels, if not the best, that i've ever seen. Animation/Graphics: 9/10 Story/Plot: 9/10 Music/Background: 4/10 English Dub: 5/10 Overall: 8/10 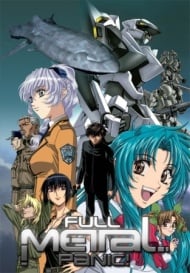 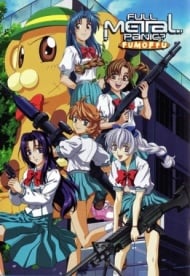 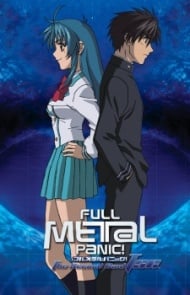 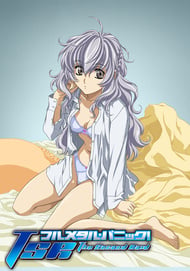 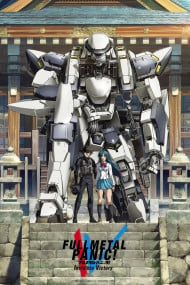 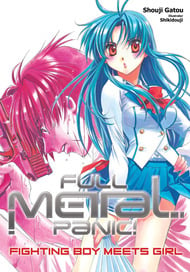 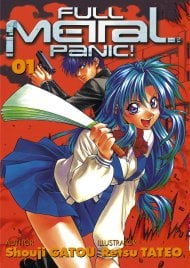 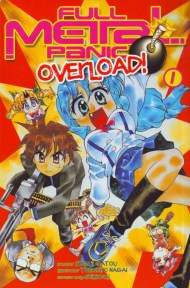 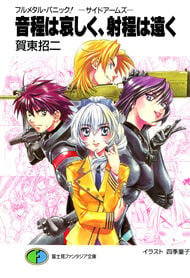 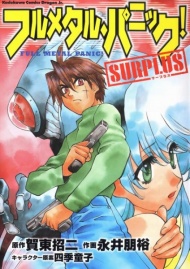 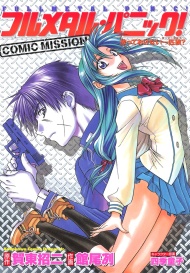 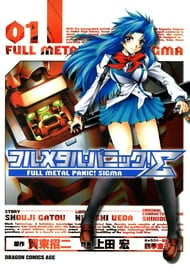 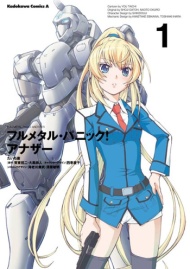 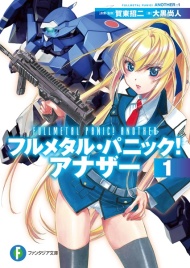 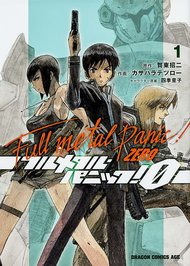 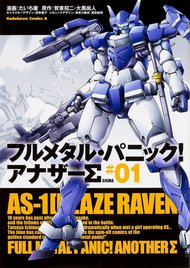