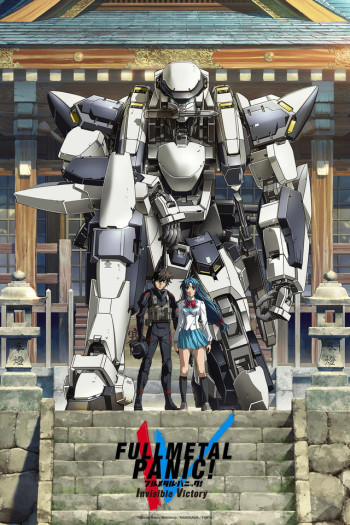 No Spoilers: Full Metal Panic! Invisible Victory finally got serious. After previous FMP franchise seasons struggled to find an idendity, vacilating between being a cute and funny romcom to a mech adventure/ drama all in the same show, (that was annoying) FMP! Invisible Victory starts out with a serious tone from the first episode and never lets up. The franchise finally grew up. While the FMP series from the beginning has always had a violent side, it increases in Invisible Victory to utter brutality. Cold blooded murder of loved characters right before our eyes is shocking. Execution head shots and explosive blood spatter is part of the norm now and it is disturbingly common in FMP IV fully earning it a solid R rating. This is the third studio by my count to undertake production of the FMP series and Invisible Victory is by far the best. There are a few cheesy CG mech sequences that look lower budget at times but other than those handful of scenes this show is amazingly done. It shines in its direction and animation quality. The characters by this point are highly developed as is the world building. It is essential to watch the first season and the "Second Raid" season to get to where IV starts off. Having skipped the Fumaffu season after a few episodes because it was too stupid to bare, I don't feel I missed anything essential to the story. Not sure what direction they were trying to go in there. (again, that romcom angle)  As the series progresses and bad guys are knocked off one by one at great cost to Mithril and new ones are being introduced as needed for continuance, we hope the franchise will go on and we get a satisfactory plot resolution. Apparently there is enough source material written in the novel series to continue the anime. After all, there is a traitor who must pay and a love story to see through to its fruition. Hopefully it won't have a tropey unsatisfying conclusion like Chidori merges with a machine and takes down Amalgam but is lost forever, or she is now part of the A.I in Sagara's mech unit. Please dont do that. Please. If you are a fan of FMP!, Invisable Victory is a must watch.

Question: How disappointing can a long awaited continuation be?

A dozen years have past since fans have seen Kaname and Sousuke, Kurz, Melissa, Kyouko, the lovable AI Al and others. And what do fans get for their patience, a whole lot of nothing but agony.

Story: let's keep Kaname and Sousuke apart as much as possible and keep dangling their romantic relationship in front of people again and again and again until they literally punch the screen in frustration.

Let's make Kaname a weak cry baby calling out for Sousuke even though we've already dealt with that in The Second Raid and she proved she could keep herself safe.

Let's create a bunch of new characters that are pretty lame for Sousuke to encounter, become part of their group and then have him use them for his own purposes regardless of their well-being.

Let’s pump up the drama and wipe out the comedy.

Basically, let's create a filler that's the opposite of Fumoffu, get it dubbed quickly with the original cast [as many as possible] air it and sit back and watch fans spend 4 hours (and about 15mins) wondering what the fudge they just sat through.

Answer: A whole heck of a lot.

The first 8 part was terrible, its nosense. If i know that, i will start from the 9. part of the anime :D The animation and the graphics was incredible, maybe the best looking mecha anime what i ever seen. this season of the anime is not as good as the first 2, [3], i hope there will be a continue.

Misleading tags: this one is serious. expect lots of mecha action and poor drama, with events being soon cast aside without proper follow-ups, and its definitely not a comedy.

Story: there is not much to say about... not much.

Sound: the choice and usage of music really takes suspension away.

Characters: the "good" characters have their moments and are believable, but not much time is dedicated to them, and again we got bad guys with almost zero personality (which actually seems to apply to main hero aswell...) made only to be killed, or hated.

Overall: decent "action flick" with fast pacing. dont expect much more out of it.