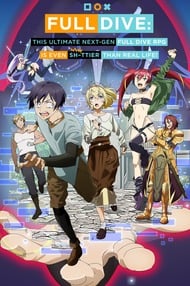 This anime has a ton of plot holes within it. On top of that, this is anti-gamer at points and pushes for mainstream sports a few times. This given show you can turn off your brain while watching it since logic a lot of time doesn't follow. I can't get too deep, but I will point out an example. So a shop keeper that is really really really insto a game forces the main to play it. She is so much into the game she helps him and pushes for him to do things. Like almost to the point it sounds like she was the one who made the game (which I am suspecting). Anyways, at a given point the starter town gets attacked and it turns out this is a huge part of the story within the MMO. But at the same time the shop keeper which knows a ton of things about the game, she has no idea of what looks to be a mainstream quest that most everyone will have to deal with.  Basically, this suffers from lazy and poor wirting (UPDATE) Now that this is done, I ended up giving this a lower rating. I think this might be a solid skip.

when i came to know that the author of THR HERO IS OVERPOWERED BUT OVERCAUTOIUS" i was verry excited. the humour in the earlier anime was very much of my liking and so the exictment was justified. but boy was I led down. Then is virtually no comedic momemts(bar the busty elf) which are not enough to power up the anime. the story pacing is terrible and i would not be schocked to see some one drop this after 2 episodes. This show sort of pushes the fans away using its content. One would not expect much character development in such anime but this one is nearly near 0. With many plot holes ,if you are a seasoned anime watcher you might not get your worth from this anime, but it would be a good watch for people who have just started watching anime my ratings for this would be 6/10, pretty basic nothing out of the ordinary here, story pacing is bull crap and watch it if you want to kill some time

3S review no.37 (short, simple and salty/sweet/spicy) So… another anime where you get into a video game… what a breath of fresh air. At least it’s not an isekai so that’s something. You are not stuck in the game, you can quit anytime you want, the catch is that you don’t want to do so, cause the game is so shitty, so hard and frustrating that you want to finish it. That’s an ok approach to be fair and a very realistic relationship with a video game that most of us had at some point in time. In that manner this show is if anything else a nice study about video games and pursuit of realism. Why do we play games in the first place? Most likely to have fun and avoid reality, not to relive the frustration of it. Anyway since you wouldn’t want to play such a game why would you want to watch a show about it? And the answer to that question is… I don’t really know. At first the story can be intriguing but the whole thing gets really old really fast. Anything that can go wrong will go wrong and the MC will have trouble even at the smallest tasks. It gets repetitive and predictable. So if you liked the premise you are lucky cause you gonna get a lot of it. It’s all kind of superficial though, cause in the end, weather he is weak or not, weather he is humiliated or not, weather everything goes wrong or not, one way or another things are gonna work out for him. The characters are…. What you’d expect, I mean you can make a case that the MC is different cause he is weak, really weak blah blah blah but in reality nothing changes, he just manages to surpass every obstacle one way or another like every other typical shounen MC does. Rest of the cast is also pretty stereotypical, forgettable and eventually turns into a harem, it’s not the most typical of harems, but it’s nothing exciting either. Animation is very basic, it’s crisp but there is not too much movement, not a lot of frames but a lot of cgi backgrounds. Character design is also rather uninspiring and forgettable. Sound doesn’t escape the mediocrity either, very basic. The opening is forgettable but the ending is very enjoyable, it’s typical goofy harem ending, but you know, still works better than a boring normal ending theme. Voice acting is nothing to write home about either, especially the lead, I feel he could be so much better, even in MHA he is like the weakest VA even though he is the lead, I mean he is not terrible and his high pitch is funny at times, but still I think there are so much better VAs out there stuck doing secondary roles for whatever reason. The rest of the cast is ok. So, is it worth a watch? Meh, not really, I can’t recommend even though it is not terrible (stiil I’d rather watch this over SAO). The creator’s previous work (The hero is overpowered but overly cautious) was more enjoyable, they are similar shows, parodizing something mainstream, yet they both share a main issue (an issue that is even apparent in One punch man). It’s just that it’s way more apparent in this one. The same thing they wanna make fun of, end up using as well, so at times this show feels like a SAO clone instead of a SAO parody. The thought behind it ain’t half bad, make a parody of something wile also trying to present a decent and coherent story with likeable characters. But this is such a difficult thing to do and while it was somewhat successful in his previous work (story was more coherent, the male and female lead were more likeable) length also played some part in it, unlike the overpowered hero this one is not a one season show, it already feels like the premise has gotten old I’m wandering for how long it can keep up. 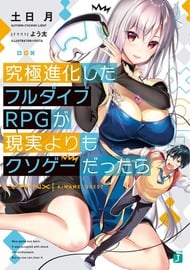 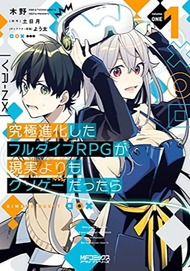