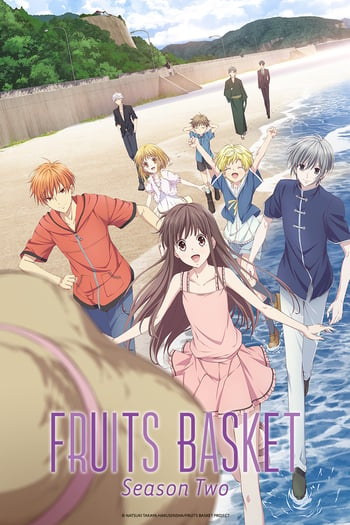 When I watched S1 I thought it was deep enough.. Now I am watching S2 and it's even deeper. Even through all this sad theme it's definitely an Anime that deserves more praise. Characters are well-made and animation too.

I want to cry almost at every single episode of S2. 😭😭

Season 2 so far has me wanting more.

I never watched the first 2001 Fruits Basket so I'm coming in fresh and loving it. I'm loving how the characters are evolving and also all of the revelations that are coming about. I really hope they drag this series out as long as possible.

Let me start off by saying I liked the first season of Fruits Basket a lot and gave it 4 out of 5 stars (a very good rating for me). But as I see all these glowing reviews for the second season, I thought a differing opinion may be helpful. I did not enjoy the second season and dropped the show at episode 12.

So what went wrong with the second season? I don't mind a good drama. I don't think everything needs a happy ending. I don't even mind a good, cathartic cry. But I do think there is a limit to the sadness and despair an audience can be expected to endure before something crosses the line from drama to misery porn. That line is probably different for each person, but for me this show crossed that line at episode 12. An episode, aptly named You Cried for Me, about a minor side character we hadn't seen before and probably won't see again and her tragic backstory. Everything about this season is tragic backstory, or tragic present, or probably tragic future. The first season had some laughs and hope mixed in; this season left me cried out and unable to face more. I hope for the sake of those who finished the season that there was some sort of payoff at the end, but I couldn't make it.

Does this mean I don't recommend it? Not necessarily. If you liked the first season and have a higher tolerance for watching characters suffer than I,  then you might be rewarded with a fulfilling season. There are after all several reviews left by people who loved this show and I won't say they are wrong, just that we have different tastes.

Ever since I discovered Fruits Basket (the remake), I was hooked with the plot, the characters, and even the graphics. I get a bit picky on anime when it comes to graphics so I checked this one out and instantly fell in love. I have watched season 1 so many times and now that there is a 2nd season, there's just more to find out (I haven't read the manga). It's such a great show because of the life lessons, the laughter and the romance. The style of the graphics is really good which made me love it even more. BASICALLY it's such a great show, it will forever be in my top 5 animes, and I highly recommend people to watch this :) You'll fall in love with the characters as well XD

i love this anime with passion!

I want them to continue doing this anime!!!!!

the story is so heart breaking yet so heart warming !