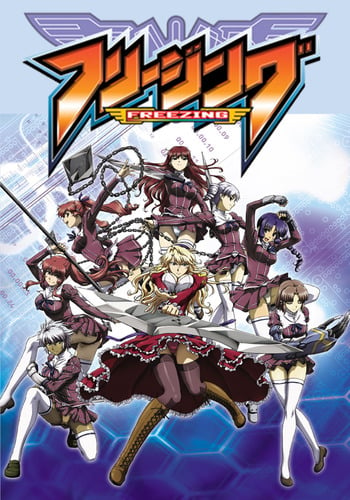 I mean Freezing the anime was already pretty bad in my opinion but now....this.....THIS! I'm not gonna lie...I don't get it. I mean why would somebody do this? It's not even funny it's just.....10 sec.....10 seconds....it only took them 10 freaking seconds to show nudity in one of the episodes....This whole OVA is based around breasts...seriously there's nothing else there to see......even....the FUCKING NOVA HAS BREASTS.....I know it's supposed to be funny....but it really isn't. It's just a lame excuse for someone to be able to draw anime characters naked and live out some wild fantasies. Let me just tell you about one episode and trust me it isn't even the worst one. So yeah we see Satellizer fighting against Ganessa. Satellizer has a cold and apparently her clothes are effected by this...so what happens you may ask....her clothes disappear?....of course!! So...yeah then Rana suddenly appears out of nowhere and starts...."making out"? with her....after that little bit she gets naked too of course (well almost naked) because she wants to compete with her infront of Kazuya......so what do you think happens next?.....did you guess Ganessa gets naked too?....THEN YOU'RE RIGHT 100000000000 POINTS FOR THE CANDIDATE!......I mean WHY?! WHYYYY?!....it gets even worse from there so I'm not gonna bother anymore.....

Now as two of my other reviewers pointed out there is no plot, other than the guessed after the first season daily life bs. It really is fan service that that is what escapes the other two reviewers. What did you expect from a show that had exposed breasts to being with.

I didn't think they were bad just not as interesting as the the show and yes the nudity is abound but what do you want from a 3 min special, plot and action. Grow up, you don't like nudity, then don't watch a show you know has nudity. If you watched the show or just like nudity, then watch the specials it's 18 mins nothing ventured nothing gained.

There's barely any reason to rate this above even a 1, but I only gave it a 2 because the dubbed version was actually decent, but good dubbing for this is like trying to polish a turd, it can't be done. All it is is the girls either molesting each other or stripping each other, nothing more (although I will give the 3rd one credit, it wasn't the worst).

Don't even bother with these. You'd be a lot better just watching the ones Queen's Blade and High School DXD made, at least those ones are enjoyable (and the Queen's Blade one actually has a plot, a ridiculous, watered down plot, but a plot nonetheless) these are not.