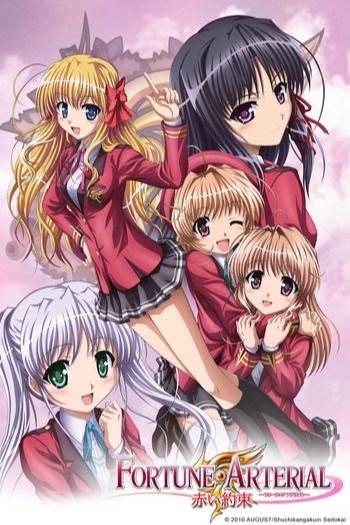 Kouhei Hasekura has changed schools so many times that he’s convinced he’ll never make friends, but luckily for the boy, he’s just transferred for the last time into Shuchikan Academy, a prestigious high school on Tamatsu Island. After being welcomed warmly by student council vice president Erika Sendou on his first day, Kouhei’s good vibes quickly disintegrate when she screams and runs away as they’re about to shake hands. What’s more, the boy soon discovers that Erika and her brother, the student council president Iori, are anything but typical: they’re vampires! Can Kouhei find his place at Shuchikan Academy and finally make true friends, including the vampire who can’t seem to tolerate standing near him?

I have to do a review on this anime right now so that i can remember this episode 8. so keep in mind that ive only watched up to this episode. First of all this anime is about a guy that comes back to his hometown, and all the characters have that child hood memory shit. When he comes back he finds out about a sister and brother(not his) that are in the student council and they are vampires. oh wow, didnt see that coming. The old immortals are smart and are in leadership positions. I also didnt see it coming that the guy (main character that comes back to town/island) and sister vampire have a "thing" for each other... or at least... she has a blood lust for him. Obviously he is special, but it hasnt clued anything else. Im getting tired of unoriginal vampire money making campaigns. I get the deal with vampires... its awesome, but damn this anime is aggrivating to watch. Here are some examples of why its aggrivating: 1. The vampire sister is about to wipe the memories of this girl (again) and the main character guy is all worked up about it... they are fussing... making no sense... just when you think she wiped the girls memories... she didnt, and the two girls hug all lovey duvy..... Im sitting here screaming WTF OMG YOU SHIT at my computer monitor about to wake the house up. So it amounts to... the developers wanted to create a dramatic scene that gets you worked up. It just seemed to me like a cheap way of adding drama. 2. The girl that got saved by the vampire girl when they were kids, whom is also the girl that is getting her memory wiped has a sister. Their personalies are managable most of the time... but like in episode 7 i think... or 6... they try to make up with each other over their feelings and such.. and they just sit there basically screamilng at each other "I want you to be happy." That is basically all i heard for the 5 min. conversation. Why can they say "yes we have done wrong, but now i understand that we should both try to be happy together." They never even get to that point... they finally say "this is a wierd situation" with tears in their eyes... and it appears that they have made up. This anime just seems too simple and not well thought through... maybe its just me though. This anime is ok though... For example... I like the vampire brother. He appears to be half way intellegent, which is the way someone who has lived for a long time should be. He is also funny. He understands that people need to laugh sometimes, and can make the situation fun and interesting/exciting. (for the people in the anime, as well as watchers). I am excited to see what the main character is, and what this new vampire is going to bring about to the story. So.. it has the possibility of evening itself out so to say... but it could also get worse... So here is my advice... If you are looking for a anime just to sit back and enjoy with out and critical analysis (Meaning... your one of those people that give purpose for the quote "ignorance is bliss". You dont have a logical mind. You dont want to think a lot. You just want to watch good looking characters flirt with each other.)... this anime has some good points, but if you are looking for an anime that is exciting intuitively (mental stimulation) like detective conan, or at least pleasantly logical... look somewhere else. I never try to discourage anyone from watching something. I just give my opinion and advice so that if you totally see where i am coming from then you wont waste your time. If you can watch something and enjoy it... isnt that better? than not enjoying it? If you have to do something... wouldnt you rather enjoy it than to sit there complaining the whole time.... This is a bit different though. Most people are not forced to watch anime. I wish i could enjoy it. It would be one more thing i enjoy.. so its not like i want it to be bad. 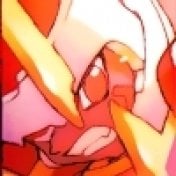 Ok it's my first time writing a review, this is the second time I was hyped by some anime so much, and then dissapointed soo much. Story It's about a random guy who changes of schools frequently because of his parents (old plot, very clichéd) and returns to a random island to start remembering he has two friends there and now he can stay in the random island. He  meets the vice president of the school who's weird and doesn't want to be too close to him, but she loves him. By the way the guy's name is hasekura kohei and the weird girl sendo erika. SPOILER TL;DR version the girl is a vampire, loves the guy, doesn't want to drink his blood because she wants to be a normal girl and it's afraid to spoil the guy life, but her mother wants her to make the guy her sexual toy, well her dependant lol. I give the stoy 4/10 because it's very clichéd, and 12 episodes doesn't cover too much about it, instead they waste space and time with so many unnecesary plot, you think well fun stuff, but when you get to the plot is boring as hell. Just the two first episodes are good lol and the last 2 episodes are the only ones that inform a bit about the plot. Oh and don't expect answers for the cliffhangers, plotholes, it's imposible with only 4 episodes that are worth of something. Animation While some of the girls look cute, their body proportion isn't equal to a 16-17 years old girl, they look like kids. The colors are good, the background is ok. The bunny of shiro is horrible drawn lol, well not so bad, but it's boring. 4/10 Like I said, good colors, nice hairstyles, but horrible proportions. Sound The only good thing here, some nice pianos. The opening is awesome and the ending is ok, but it isn't a masterpiece like the ones made by uematsu or motoi sakuraba, so don't expect too much, ok? 6/10, the opening really did save the category   Characters Ok, while Sei (the guy with white hair bro of shiro lol) and the president Iory are funny, most of them are boring, except kuze and Kanade Sendou is ridiculous sometimes with her, I don't want to drink blood. Shiro hmm is just there to serve tea no purpose. Kohei - Hmm he should have learned kidos or something, he's boring. Haruna - well the typical girl that likes the main, but has no chance lol. Kanade - she's cool with her stickers Kuze - I like girls that are quiet lol Tsukasa - the friend of kohei, wtf he does there, he is just there to occupy space. 5/10, only 4 characters are fun, the rest are boring.   Overall 4/10 I give this rating because the anime is way too short to develop a decent plot, the studio didn't do justice to the game, this failed soo hard, they could have saved the anime by giving an interesting ending like the random guy lets the random girl kiss him, drink his blood and he gains powers to beat the mother of the random girl, because she's annoying. Really, the only bad point it was the lack of plot and that it was too short with a fail end. It's so dissapointing, as Akane Iro ni Somaru Saka was, we expected something and we got something way too boring. Soon my review of that horrible anime, well it wasn't horrible, but i'll explain what made it so full of fail.   See ya

My anime reviews are always simple, short and straight-forward and is 100% spoilers-free.Genres: Comedy, Romance, School, Supernatural, VampireAdditional Info: Leisure time?Ending Rating: 80%Short Review: An average anime. It's not that typical romance anime where there's alot of kawaii and "ahhh" moments. But still giving it a shot doesn't hurt tho. 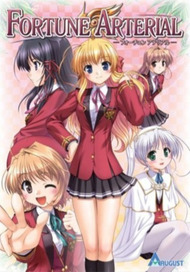 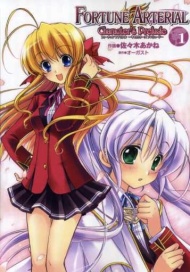 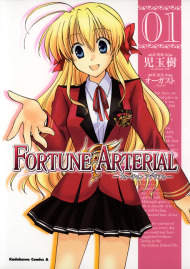