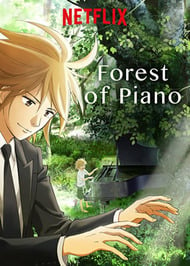 If you are wondering if you should watch the movie or the TV Series? Then you should know that it's the same story. In fact, the TV Series follows the movie almost to a T. But the movie has better animation by MadHouse and featured performances by the renowned pianist Vladimir Ashkenazy (I'm not sure who does the performances for the TV Series, but they are also very good). However, the story starts to differ with the ending of the movie. So you can start with the movie and then jump to the TV Series to finish the story, at Episode 5, where the differences begin. The only advantage of watching the TV Series is if you prefer or need the dub, as there is no dub for the movie. If you think you don't like classical piano, think again! You've been listening to classical music all your life, its on commercials, TV Series, Movies, at restaurants, at the Mall, when they leave you on hold on the phone, etc, etc. And just like any other type of music, there are some pieces that everyone recognizes and everyone likes; this is the kind of piano music showcased on this anime, and the performances are great! The animation is average at best and loses quality with the use of some terrible CG for the piano performances, specifically the hands. I guess it was just too difficult to animate them by hand, but being an anime about music, probably with some budget constraints, I can only say that they did make the right decision to put everything into the music rather than the visuals, after all, you want to hear the performances and when music is good enough, you may find yourself closing your eyes as well. There are some visualizations on the animation, but these vary in quality and will never be as good as if you are only focusing on the music. Unfortunately, they added some dialog over the music in an attempt to guide and educate people about the kind of emotions that evoke and the kind of things that makes a performance better than others. This will usually be a good thing, but they added just too much, and don't give enough time to try to "hear" in the music the ideas they are trying to convey, for example, they will say that a performance is warm, but won't give you the time to try to find that quality in the music, instead they go into the next idea/suggestion and the next, etc, etc. At times in some performances, I found myself wanting to yell at the narrators to shut up and let me hear the music, which was so good, but the narrators definitely ruin some performances. The story is simple, mostly about the pianist's competitions and their struggles to find their own sound & style. There is a lot of criticism for the way judges assign points and even the politics behind the scenes that can move the voting in one direction while making or breaking the artists' careers. In the end, it also proposes better ways to make these competitions fairer. I should also mention that in the movie, there is a lot of focus on the main protagonist's mother profession and circumstances, that highly gets ignored on the TV Series. I'm not sure if this is because of the TV censorship or the source material, but it's unfortunate that we never get to see how all of these struggles were overcome, and the issues with his mother are highly ignored. The characters in this story are meant to fill certain roles and represent different ideologies & personalities that you often find in this kind of music scene. Everyone has a different approach to achieve the best performance and focus on different things. In the end, this anime tries to give its point of view for "how things should be" and what they should really be focusing on. Overall, this show may not be for everyone, but I do think that everyone should give it a chance. The movie may suffice to give you an idea if you want to keep watching this series or not as if that didn't grab your attention then you should not expect more of this show. The dub is ok.

Sigh, Only at 2 episodes and have been kinda annoyed with the CGI graphics when Kai is playing the piano.  Another thing I was hoping it would be the follow up of what was adapted in the film, so i am gonna guess that the first few episodes are particularly copy paste from the film with the obvious CGI changes.) I will continue to watch it, since i enjoyed the movie. (which almost a week after i watched the movie the series was announced. So i got excited.)  Before completion of watching. _______________________________________________ However, this is a premature rating. So whether or not it stays on my list will determine this factor.  I rated the story a 7/10. Because it starts out with what happened in the film with a bit of a few differences.  I rated the animation a 2/10 because of the obvious CGI while the piano is being played. Similar to how some 2D videogames look.  The sound is rated 9/10 just because i want to have an over all of 7.  The Charactors are rated 10/10 because of the minor changes they made. (which makes the side charactors pop out a little more.  Overall 7/10  (7+2+9+10)/4=7  I think I can edit this later on,  so if my thoughts change after watching it. I shall change it.  Basically, only thing i can say that i dislike is the obvious CGI. But I would recommend you watch the movie first. To see the differences.  Stop being lazy animators.  ___________________________________________ Afterwards.  a few changes,  Story 9/10 due to the increased structure and beauty of the remaining after the movie parts were through. But they kinda rushed through it all, i feel there should have been more to the story.  Animation 3/10 simply from getting used to the CGI...  Sound 8/10 which when they played Rachmaninov's Piano Concerto No. 2... it was the same recording which they used in Nodame Cantabile, it is a good recording, but one would expect that different players would have a different sound. This also includes the two different times they played it. but the last episode really changed it all. And made it higher. Character 10/10 still. some characters need more background. While others are just perfect for explainations. Yet, the qualities would be closer to 9.5... and i am not sure if i could put 9.5...  but since the limit is 10... i gotta go with that. i will keep the overall at a 7 since it has been a bit of an up and down experience.  I do recommend anyone to watch it, it could very well spark your inspiration in music. But i still like the Movie a lot better than the first episodes of the series in my own opinion. 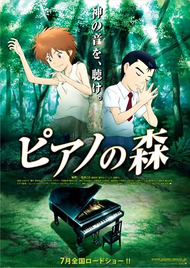 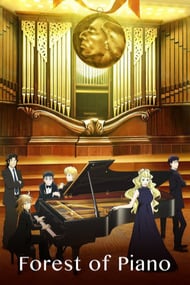 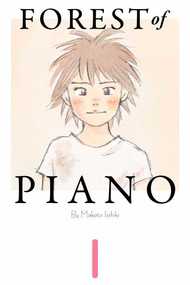