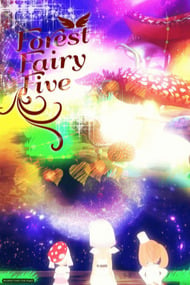 400 users are tracking this. Log in to see stats.

Forest Fairy Five: Fairy Tale is the second season of Forest Fairy Five, a show about five fairy girls who enjoy hanging out together. If you've read my review on the first season, you'd know I had very low opinions of it (I literally called it the worst anime I'd ever seen). While I don't think the quality of the show has gotten any better, I do think adding the 'fairy tale' aspect was a smart move and makes this the better of the two seasons. In fact, you could skip the first season and jump right into this one (not that I would recommend doing so). However, there is little else to compliment. Story One of the biggest problems with the first season was the complete lack of story or direction (episodic or overall). While they sometimes tried to have little plots in each episode, it always devolved into the girls chatting away boringly, with little to look at visually. However, now the 'story' is the girls decided to start up an acting troupe (told via narrator only) where they act out Japanese fairytales/folk stories. This is a great direction for the show, especially since it is designed for kids to watch. Each episode is made up of an unneeded two-part intro where it's explained via narrator about the exsistance of the fairies, the decision to start up an acting troupe, and the introduction of that episode's story (or previous episode recap). Then the rest of the episode is the folk tale, followed by the characters dancing during the credits. Most of the stories last a few epsiodes, most likely due to the small episode length. However, I think the stories would have worked better as single-episodes, because of the intended audience (kids could easily miss an episode and have to depend on the recap at the beginnging o the episode of they missed something). Not to mention the slow style of the show made the episodes seem way to long. The stories themselves are the traditional Japanese stories you may have heard about before, Momotaro, Kaguya, etc. and while I'm very certain there were many liberties taken with them, I do think they chose good stories to show case. They teach culture. Overall, while I do think the switch to story-based episodes was a large improvement, there is still a huge lack of quality. Other kid shows so this type of thing much better. The stories should be exciting and fun, but this show is void of any excitment or emotion, which is the fault of both the script and voice actors. Animation No upgrades here, animation is still terrible CGI, possibly motion controlled. It looks like a terribly animated video game, where arms or hair goes through other objects.  The charcters' faces show little emotion and characters move unnaturally. I assume this was a budget choice, as I'd image it's much cheaper than trational animation. Characters I think having your favorite childhood characters act out fairy tales is fun, but the Forest Fairies weren't very interesting to begin with. While there is at least a script this time around, the voice actresses don't do a good job of making the characters stand out, and the way the voices are recorded makes all the dialogue sound awkward and slow. Between the dull voices and lack of expression in the animation, it can be hard to watch the characters interact. Overall While there is an upgrade here, it doesn't do much to save the show. There are plenty of other kid shows that are such better than this, so I wouldn't show it to a child. I especially wouldn't recommend it to an adult anime fan! 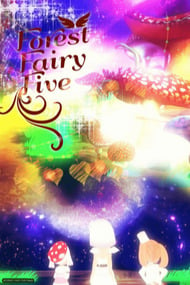