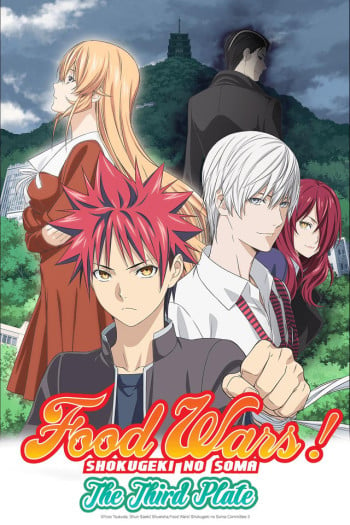 Hi fellow anime lovers and welcome.Please have a seat,grab a drink and let's dive deep into Food Wars..But before you go any further and you are here by mistake and didn't understand this is the 3rd installment,go away watch the previous ones and come back anytime.

And let's start with the obvious stuff,yes?Food Wars is literally food porn.But then we all knew that after watching the previous seasons.Sure there is a heavy lean towards the food making(well duh it's an anime that has to do with food),but there is also the side where we get to see the impact the food has to people..Which is as realistic as realistic is the chance of you being tentacle raped by an alien tentacle creature in the next 24 hours.

By that i mean that when someone consumes said divine food goes into overdrive and rips their clothes,without even touching them.And while on overdrive the laws of physics no longer apply...Especially when we're talking about them boobies which seem to have will of their own..God even boobs have character in this anime..This is some serious stuff you know.

Sure it is a tad weird but even a toddler can understand that this is a way to show in a streched manner how food can fuck your sense of pleasure.

With that outta the way onto the story itself.This time round the plot thickens..And no i don't mean "plot",i mean plot period.Here we see in some detail the workings of this academy and how family-bussiness politics can turn a working system where everyone has a winning chance into a system where it serves only the chosen few,the pure blooded.Remind you of anything?

Honestly i liked every season up till now,but this is more mature,has more depth.It's a step further in evolution.

The characters are the ones we all know and love,otherwise we wouldn't be here,would we?Without any spoilers,if possible,the characters are put in such situations where growing up and taking a step forward is unavoidable.In some instances let's say they're forced to take a good look at themselves,their past,their fears and move on.

Just before i move on though...This supposed relationship they're building between Nakiri and Yukihira...Let's say they end up together,can you imagine the moment she turns and tells him that she wanted to jump his father all along?

Animationwise nothing to report.It's what we came to expect from this franchise,nice and smooth.There are one or two moments where CGI is used but it's not very distracting cause it's used minimally.

As for the VA's they certainly deliver their parts and aren't in any way/shape/form out of place.Opening and closing songs are indeed likeable,not my cup of tea but listenable.

All in all this feels,and indeed is,a natural continuation of everything this franchise had to offer.It shows spectacularly how things in life aren't all laughs and hugs and all that crap.It's also about the dark times,the difficult times,the times where shit starts to get real and how you must rise up to the occassion if you don't want to be buried in a world of shit.

That said i'm not the be all,end all so watch it and form your own opinion.

Absolutely love this anime. The culinary tips and tricks are sound. The similes to describe the food are hilarious. The characters are endearing. I have nothing bad to say about this show.

The third seaon of food wars is filled with unexpected twists and turns.

I was jumping from my seat when Yukihira challenged Kuga for the most money made in the moonflower festival. I really admire Yukihira's courage and optimism and that he believed that he could head on challenge Kuga.

Tsukasa Eishi's character is so adorable. I honestly thought that since he is the first seat he would have been an airhead and over confident about everything he does. But seeing that he actually is really shy and anxious is really refreshing to the streotypical mind.

I cannot even begin to describe my hate for Eizan and Nakiri Azami. I totally loathe his way of thinking that gourment cooking is the best.

Alice is a sweetheart, helping her cousin to escape her father and trying to restore the bond she had with her befor leaving for scandinavia.

The series ended with a bang with Ryou kicking the central's ass and Erina finally getting to know that Yukihira was the son of her favourite chef.

I really look forward to the second part of the third season!

The story for the arc was pretty good and showed how brutal totsuki is with it's hierarchy, though it slips down a bit after the moon festival. The elite ten definitely felt way more brutal as they felt like actual challengers/rivals in this arc. Tsukasa kind of annoyed me though, as to me it felt like he never really had a destinct personality. Erina's backstory made me understand her a bit better and he father needs to go to a mental hospital. It was really nice to see Erina in the polar star dorms too, though I'm surprised she didn't gain any weight from how much the students tried their dishes out on her.

The CGI on Kuga's workers was shocking and almost humourous. At first I thought that the show had switched animators as the characters looked a little different (Takumi Aldini being the most noticable). The food lust scenes are definitely shorter, but what annoys me about them is that there has to be a girl in every scene so it would be more fanservicey or something, an example of this is that the main focus of the scene switches from the male judges to a female character getting horny by the smell of what ever dish it is, or a character popping out of nowhere to try the dish (even though they shouldn't even be on stage. The amount of angles and shots from below a girl's ass or legs really annoyed me. There are also alot of scenes focusing on bras or tits.

I can't remember any of the names of the elite ten that weren't up against Soma at some point. I think it would've been better to introduce them all later on, as they aren't even needed in this season anyway. Erina's backstory made me feel a little better about her, but I can barely tolerate her when she's anywhere near Soma, as her bitch levels go through the roof. Speaking of Soma, I don't understand how Erina's fallen in love with him as she apparently hates every moment with him. Alice became one of my favourites after this season though, just because of one scene she was in.