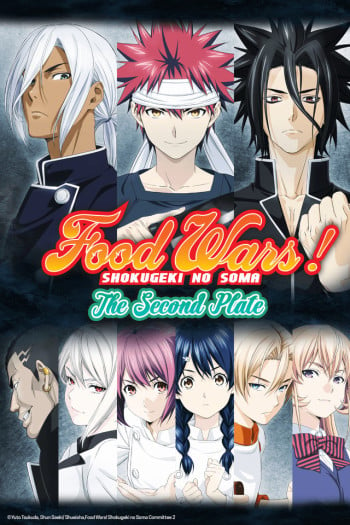 If you're looking for anime similar to Food Wars! The Second Plate, you might like these titles.

Mao is an aspiring young chef trying to live up to the legacy left by his mother - a nationally-recognized, culinary genius. Leaving his home as the successful winner of a successor cook-off, the inspirational boy travels the length and breadth of China to expand his sizzling repertoire. In addition to meeting a wide range of personalities with varying gourmet skills, Mao must use every skill his mother left him to become a legendary chef in his own right.

Hello! My Name is Satis and if you like cooking anime's in general and think you've watched them all then Chuuka Ichiban may catch you by surprise.

This anime is fairly unknown to most people as it was made back in 1997, but it will still make all you food lover's mouth water. The dishes highlighted in the anime is chinese sichuan cuisine.

Give it a try! There's the tounament aspect and everything!

the story is absolutely awesome I have been watching the whole series so far and the characters and the surprises from the father. I am annoyed though with the antagonists like Nikiri cousins they irritate the crap out of me I am surprised she doesn't see the second seat from the academy