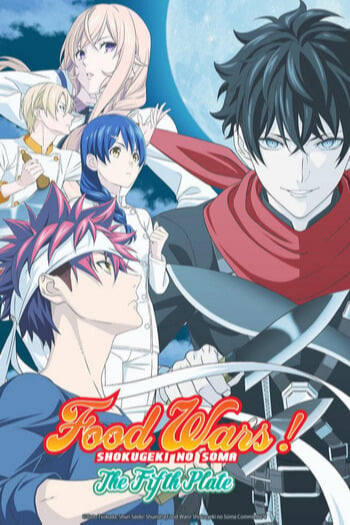 Be forewarned, the following review may contain spoilers. Read at your own risk.

Meet Souma, he is the son of the owner of a small eatery in Japan. For his age, Souma is a very talented person able to easily come up with new dishes; sometimes these dishes are some really weird combinations of the ingredients no one would use. After some time, the owner of the Souma's eatery, Souma's father, leaves the family business to work with his friend. Souma's restaurant is on the verge of closing. To improve his cooking skills and to save the restaurant, Souma begins studying in Engetsu Teahouse Culinary Academy, which is regarded as Japan's top culinary academy. The problem is that only a few are able to graduate from it, these few are world's best gourmet of culinary. Will Souma manage to graduate from the academy?

Many have been waiting to see the 5th season and the pandemic made this wait even more impossible to put up with. However, was it worth it? I do not know. It does not feel like Food Wars anymore. Just a season ago, Souma was not the member of the Elite Ten; things were different. The new season could have focused more on the life of the new members of the council; however, the only thing it does is jumping from one event to another, without giving the viewer enough time to enjoy the series, which makes this season somewhat rushed, to say the least.

What I mean is that the anime introduces a group of supposedly French underworld chefs called Noir, which is French for ‘black.’ They immediately become the main ‘villains’ of the 5th season. Do not get me wrong, I have nothing against Noir. The problem, however, is their leader, who is so far one of the worst characters of Food Wars, because it is simply beyond obvious who he is, what he tries to achieve and why. Anyways, I am sorry for destroying your hopes for seeing Yukihira Souma’s father as the last boss. He is no longer shown as one of the best, something that 4 seasons of Food Wars have been doing. Yukihira Jouichirou is not the only problem for me to mention, he, just like many of the supporting characters are quickly forgotten; the new season does not care about giving  all the characters, including the supporting characters enough love and this is very easy to notice.

Needless to say, the new season suddenly changes many characters, without explaining anything for the viewer to understand these sudden changes that appear ‘out of nowhere.’ Take for example Erina Nakiri. She suffers the same fate as the father of Souma, she is not that amazing genius that could make a masterpiece out of nothing and a chef from a simple amateur anymore. Funny thing is that Erina is not the only example of this ‘sudden character change’ and there are other reasons for me to say that, but they will be for you to find out.

And there you have it, Food Wars! The Fifth Plate. The season, where everything is simply beyond obvious and it makes this season boring, somewhat lazy, careless and inattentive to the important details. Tsukasa Eishi is an excellent example of how characters should look like, it is visible the moment you see him that Tsukuda Yuuto did everything to make him look like a chef. His passion for cooking is very understandable, because all he can do in life is cooking. Now compare him to Saiba Asahi. It just feels as if Tsukasa Eishi’s character was written within a week and Saiba Asahi within a day.

On this positive note, it does not mean that you will not appreciate the 5th season. If you are a fan, do not listen to what other people have to say, including my review, of course. I am a fan of Food Wars, I loved and still love the first seasons, however, I failed to enjoy the 5th season, because of the fact that it is way too obvious from the very beginning: you know what it is going to be about, you know everything about the main villain of the season the moment you see him and this makes it boring; there is no mystery.

With that being said, 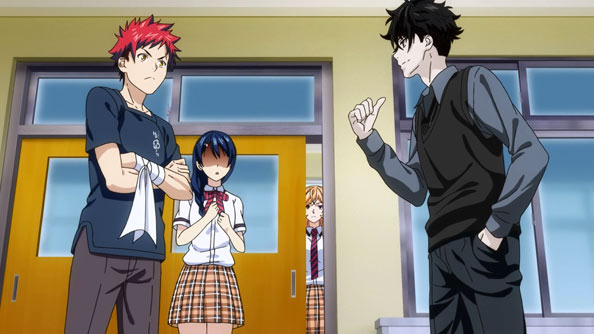 The story of a Young boy, going to an elite cooking school to become a great chef like his father, has now become the story of a Young boy fighting, the equivalent of Team Rocket but Cooks, in the EVIL (OOOOOOO spooky) GROUP OF UNDERGROUND CHEFS, NOIR. Again, the villains of the anime are now CHEF MAFIA.

Forget the days of using obsecure French/Italian/etc. techniques in a new way to make a Fantastic Dish.

NOW we have people who use Chainsaw as a Whisk, Hammers instead of a Knife, & Explosives for Oven.

Shokugeki just pulled a Game of Thrones on us. You end the Anime as a Hero or extend it long enough to become the Villain.

Don't even get me started on the shitty IF I WIN A SHOKUGEKI, ERINA HAS TO MARRY ME, Bullshit. Like WTF! Erina is literally the best cook in Totsuki after Season 4, Why is marriage being decided by Soma & Mr. New Villain.

Food Wars! The story of a young talented cook, Soma, who at an early age started working in his family's diner. When Soma goes to the Elite Cooking Academy Totsuki, he looks down on his fellow schoolmates as they have never been in the field and served customers, like Soma has since an early age. All the Totsuki students have book smarts and Soma has street smarts.

But as Soma lives & more importantly cooks with these students, He realizes his knowledge is still lacking and he has ways to go. This is exemplified in Soma's loss to Chef Shinomiya.

Soma, now with new respect for the Chef, & fellow students goes on a journey to learn new cooking techniques so that one day he can be the very best like no one (except his father) ever was.

Soma after becoming the NUMBER 1 at Totsuki (a position he only kinda earned, Nakiri beat the former no. 1, just saying) is constantly making an ass of himself as he fails to compete with the former no. 1. After all the learning and all the hardships Soma still is not able to live up to the number 1 spot he has acquired.

But a Mysterious new group of underground chefs called Akatsuki Noir, has beaten, probably the best chef in the Shokugeki World & Soma's dad, Saiba Joichiro. Soma must now face this new threat and become the number 1 chef in the world???

Soma is not living up to the title of no. 1 at Totsuki & now the series wants him to defeat the man who defeated his Father, again someone who was heavily implied to be number 1.

This review is so critical not because the season itself is terrible, far from it. If you like Food Wars you may still find some enjoyment in this. But when you consider the previous seasons, in comparison this one fails hard.