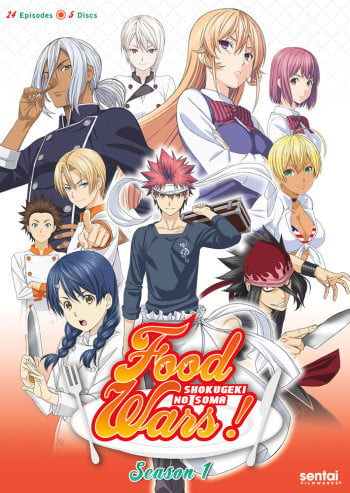 Food Wars! Shokugeki no Souma Episode 8 - The Concerto of Inspiration and Imagination

The training camp is considered the first trial by fire for students in Totsuki's high school division. Dozens of students are said to be expelled and sent away every day, and the number of students is said to be reduced below half by the camp's end. Intent on survival, Soma and his friends embark on their journey to the hellish camp in one of Totsuki Resorts' hotels.

The Madonna of the Polar Star

The Ice Queen and the Spring Storm

The Quiet Don the Eloquent Don

The Concerto of Inspiration and Imagination

The Breading to Adorn the Mountains

The Magician from the East

The Memory of a Dish

Dimwitted Azuma Kazuma is a young man with a dream -- to create a bread worthy of the name "Japan", made by the Japanese people, for the Japanese people! With hefty bread-making skills, hands that have an uncanny warmth to help dough ferment, and will power like no other, Kazuma must put his delicious creations to the test as he struggles to become...

Shokugeki no Souma is about a boy who dreams of taking over his family restaurant but ends up having to attend a culinary academy and so aims for the top. It's funny and has some over the top reactions to food that are rather ... shall we say ... risque. xD

Yakitate!! Japan is about a boy who dreams of creating a bread worthy enough of the name 'Japan'. It's funny and has some over the top reactions that, although are no where near as risque as Shokugeki, the reactions are absolutely hilarious and are sure to leave you in tears from laughing so hard! xD

If you enjoy one of these anime, I'm positive you will more than likely enjoy the other!

Food Wars and Yakitate Japan are extremely similar in presetning a progressive story of a food genious to figth through culinary school with mindshattering foodstuffs.

Furthermore, the way the reactions to food are given are similar in that they are over the top and extremely expressive.

Main difference is the ecchi / sexual nature of these reactions (albeit not all) in Food Wars, compared to the moderate but no less silly reactions in Yakitate!! Japan.

If you love food and enjoy seeing people having hilarious orgasmic reactions to eating food look no further than these 2 titles. Both have super determined main characters and amazing side ones to boot. They'll all have you drooling over the amazing foods they create!

After her grandmother passed away, high school student Ryou Machiko began living by herself. Although she recreated her grandmother's recipes perfectly, she felt that something was missing. However, when a girl named Kirin begins visiting her home, she realizes that company makes any meal taste better. Together with their friend Shiina, they enjoy many...

Food is the central theme to both shows, QED, but the similarities do not end there.  Both also share the passion and love that goes into preparing the food. Both Anime Titles also delve into the friendships form, bond and solidify over commonalites, starting with the shared love of the culinary arts.

If you love food and want your mouth to be perpetually watering in anticipation over the borderline sexual reactions the characters have to their food, these series are for you! Shokugeki is a more competitive story whereas Graffiti is a slice of life/moe anime. Food is animated quite similarly in both.

Both anime include a varietly of fun and driven characters. Super fun shows to watch.

Both food wars and haikyuu are centered around these long setups and arcs that last a long part of the season and ramp up the intensity and stakes as they go on. They're both sports anime which is one thing, but they also have interesting character designs which is a huge benefit for identifying with the characters and being interested in them in both series. One would be great if you liked the other.

Similar protagonists- both have the same character and are highly competitive and always want to win.