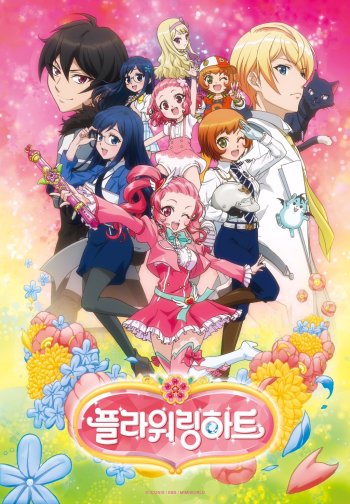 Both animes are about a main character with pink hair who found/ realize magical powers in this world and helps save people, by doing good. Both have transformation and a group of friend to share the adventure with. If I have to choose between them, I would prefer Shigo Chara because it's less kiddy than flowering heart and I really like the little tiny characters!

Fairyland is in peril! The Super Miracle Idols have disappeared, flowers have stopped blooming and the Happiness Tones that come from inside people’s hearts are no longer available to restore balance to the world. The Queen, concerned, sends the three creatures Dai, Sei and Ryoku to the human world in order to find three princesses that can help make people happy and restore the Happiness Tones. Now, Natsuki, Ringo and Layla – once three normal girls – must transform into the idol group Lilpri with the help of their newfound friends and help save Fairyland in the process!

Haruka Hani is a second-year junior high school student who goes to a school called Hinomori Gakuen. A member of the school drama club, she has been working on the script for a play the club plans to put on at the upcoming school festival. She’s been having trouble finishing it, and her childhood friend Tamaki Teijou has been urging her to hurry up. All in all, she seems to be enjoying her life. From time to time, monsters called Zaiju (Beasts of Sin) appear and attack Hinomori, the town where Haruka lives. But the Heart Princesses are there to fight the monsters. Haruka looks up to these princesses who protect the people of Hinomori from the Zaiju, wishing that she too could be a princess someday. Then one day, when she is working on the script at home, a mysterious cat named Jin comes to her and says, “You seem to have the right qualities to be a princess. What do you think? Would you become a princess?”