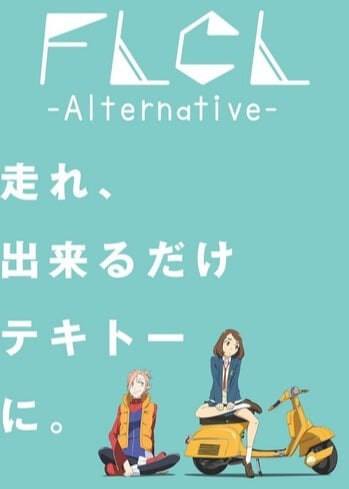 The series centers on the misadventures of 17-year-old Kana, a high school junior who spends her days hanging out with her besties, Mossan, Hijiri, and Pets. They live unremarkable lives, until the day a mecha falls out of the sky, along with a strange woman named “Haruko.” Her plans for Kana and her friends involve the force known as “ATOMSK.” Kana will have to risk everything to decide whether or not to help… like she really has a choice!

I'll say the same thing as everybody else will be saying. It doesn't come close to the experience that was FLCL but it seems to be put together a bit better than FLCL: Progressive. It'll always be hard to follow up a cult classic since music, animations, topic and time just lined up perfectly for the original. I compare it to Run-DMC and Aerosmith, being shown on MTV with Walk this way. If you were there, it blew your mind and many have tried to recreate the formula but it'll just never be the same... it's a once in a lifetime experience. Rap, rock, breaking walls with Adidas shoes with no laces... Right place, right time. Just like the other FLCL seasons, the main protagonist is struggling with her current situation in life and trying to understand adulthood. She's quite selfish and has no direction in life. She trying to make herself feel important by butting in on her friends' problems and it just creates more tension between her and her friends. The music still goes hand in hand with the animations and story telling which still creates some goosebumps, but even with the Pillows I feel that the music that was used during the original series still has the most impact. My biggest complained about FLCL: Progressive was the animation style which was a lot less chaotic and took a more typical story telling approach but the I feel the animation quality was improved quite a bit but still doesn't come anywhere close to the chaotic style of FLCL. Haruko is a lot more chaotic again compared to FLCL: Progressive but seems to have settled with a mentor role and also seems to have no interest in Atomsk this season. Which of course is kind of weird due to her being one of the most selfish and mischievous characters created in anime. So to see her being outshined by Kana in the selfishness department is a little confusing. However, It's been a  good watch.

I feel like FLCL Alternative does some things better than the original FLCL. First of all, I feel like this FLCL is better at balancing Comedy and Drama better than the original FLCL. It also brought out what I liked most about the series, which is the slice of life moments mixed in with the rock music. In fact the first episode almost feels like one long music video. The only thing is that the animation feels a bit generic when compared to other anime, but I feel like people are too hard on this series just because the animation isn't as experimental as the first FLCL. I like it just as much as the original FLCL which really grew on me over the years but for different reasons. Anyways check it out if you want. 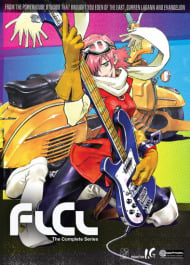 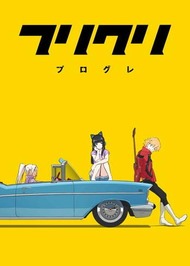 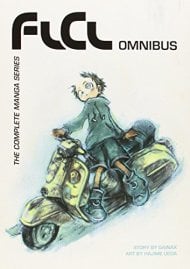 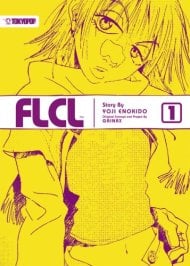